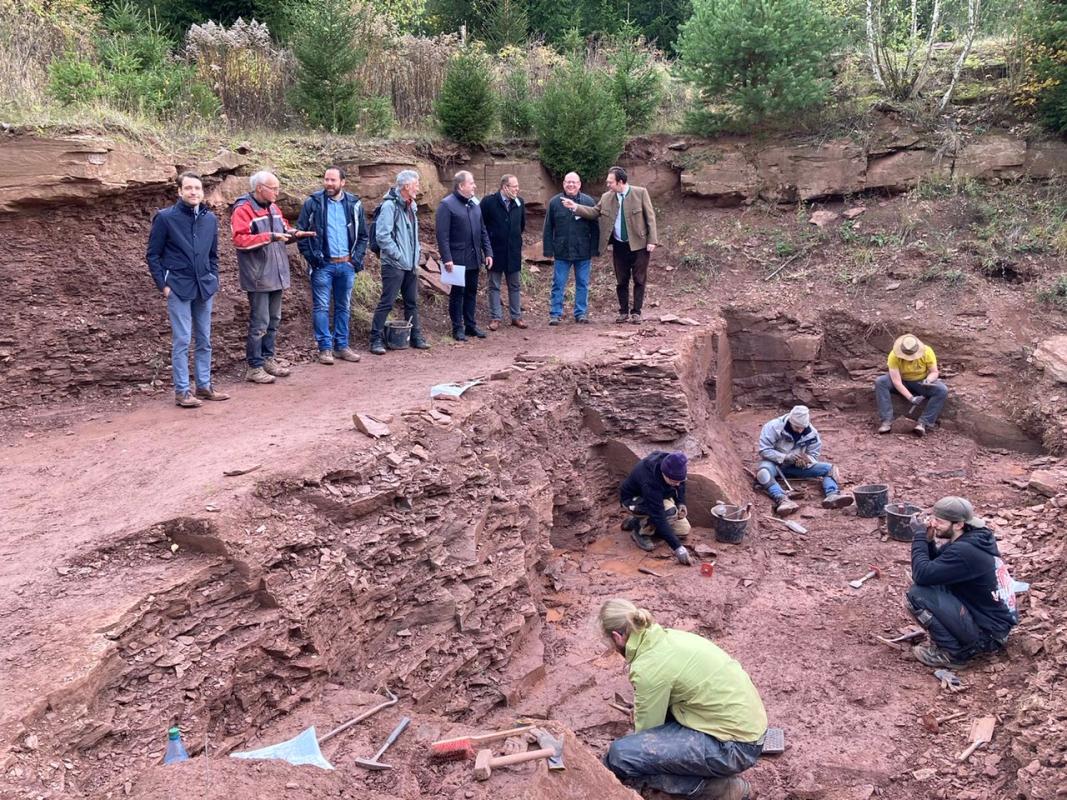 After ten years the Bromacker is being dug and researched again. The findings of the test excavation, which has been going on since October 12 and will continue until October 25, are promising: Roots, burial tunnels and individual skeleton parts came to light again after about 290 million years. As a special find, the researchers classify grave constructions which have left behind animals of the Permian period that are not yet known in detail.

At an informal meeting on the Bromacker, the project partners today thanked all regional and supra-regional scientific and political actors whose support will make this groundbreaking project possible. Under the title "Opening up science: New ways of knowledge transfer using the example of the research project Bromacker", the cooperation of the Friedenstein Gotha Castle Foundation, the Museum für Naturkunde Berlin - Leibniz Institute for Evolution and Biodiversity Research, the Friedrich Schiller University Jena and the National GeoPark Thuringia Inselsberg - Three Equals started in August. This unique research project is funded by the German Federal Ministry of Education and Research and is expected to provide detailed insights into the life of early agricultural vertebrates and their environment by 2025.

Not only what the paleontologists dig out of the earth makes the project special, but also how the public can participate in it. The goal of the Bromacker research project is to do research at eye level and to let the public participate right from the start by means of a clever and appealing interlocking of the research fields natural science and knowledge transfer. The research wants to open up with new ways of science communication: For example, in addition to a Bromacker Lab(oratorium), there will be digital media and guided tours to the excavation site as well as insights into live preparation and live CT scans of fossils. In the course of the project, an attempt will be made to get citizen scientists involved in research tasks.

The fossil deposit "Bromacker" between the communities Tambach-Dietharz and Georgenthal in the Thuringian Forest has been known for more than 100 years. It is one of the most important and productive fossil deposits worldwide and is unique in terms of first-class preserved three-dimensional vertebrate fossils and an extraordinarily large diversity of species in the early Permian period about 290 million years ago. The aim of the test excavation is, in addition to the exchange of cooperation partners, a geological and geophysical exploration of the excavation area and its surroundings. Starting in 2021, work on the site will then be carried out regularly for several weeks a year. The finds recovered during the excavation will be prepared and explored in Berlin and Gotha in the coming years. The results of this research will be presented in innovative communication formats at the individual facilities of the project partners.

Quotations of the speakers in alphabetical order:

"The Museum für Naturkunde Berlin is very pleased to be part of this unique cooperation project, which from the very beginning and in close connection with each other has been researching the transfer of knowledge and scientific research at the Bromacker Fossil Site. On the one hand, the project focuses on experimenting and developing modern, innovative formats of science communication with participatory approaches, such as the Bromacker-Lab or a digital exhibition. On the other hand, the broad cooperation with its versatile approaches enables the possibility of a holistic and interdisciplinary exploration of the Bromacker ecosystem. The focus of the Museum für Naturkunde Berlin is on the organismic biology of early agricultural vertebrates and innovative approaches to science communication." (Prof. Dr. Jörg Fröbisch, Museum of Natural History Berlin, Leibniz Institute for Evolution and Biodiversity Research)

"The small Tambach-Dietharzer sedimentary basin represents in its stratigraphic sequence and through its fossils a unique showcase in the history of the earth.  It is part of a chain of basins that stretched along the northern edge of a mountain range from the Urals to Mexico, which has long since been eroded. The harsh climatic conditions inside the newly formed supercontinent of Pangaea posed numerous challenges to the inland ecosystems and demanded innovation and adaptation from its inhabitants. In this we see numerous parallels to the present." (Prof. Dr. Christoph Heubeck, Friedrich Schiller University Jena)

"The National GeoPark Thuringia Inselsberg - Three of a kind itself and especially the Bromacker with its primeval dinosaurs is something unique in the world. It has the concrete potential to transform the Thuringian Forest into something even bigger. We see the opportunity for a sustainable future in the possibility of communicating with actors from all over the world in the general public and at the same time conducting scientific research - with international perspectives for the participating geopark communities". (Ralf Holland-Nell, Mayor of the community Floh-Seligenthal, National GeoPark Thuringia Inselsberg - Three of a kind)

"Geoparks are windows into our earth's history and thus an important element in science communication. They convey inanimate nature and the knowledge about the development of the earth and life. The Bromacker excavation project was decisive for the recognition of the National GeoPark Thuringia Inselsberg - Three Peers as a UNESCO Geopark. It is living and visible research and thus a showcase for science." (Tankred Schipanski, Member of the Bundestag for the district of Gotha and the Ilm district)

"For the foundation Schloss Friedenstein Gotha the continuation of the excavations is of great importance, as they are part of a long tradition of collections and sciences in Gotha. Geological exhibits were part of the historical art chamber and already in 1833 the first tracking plate was acquired by Duke Ernst I. of Sachsen-Coburg and Gotha. In addition to the scientific research, which is carried out together with our partners, the transfer of knowledge to the widest possible public is an essential part of the project. For this purpose, we will develop new possibilities in addition to classical formats, which will allow everyone interested in the Bromacker project to participate in a participatory and digital way." (Dr. Timo Trümper, Director Science and Collection, Friedenstein Castle Foundation Gotha)