Impressive fossil finds at the Bromacker 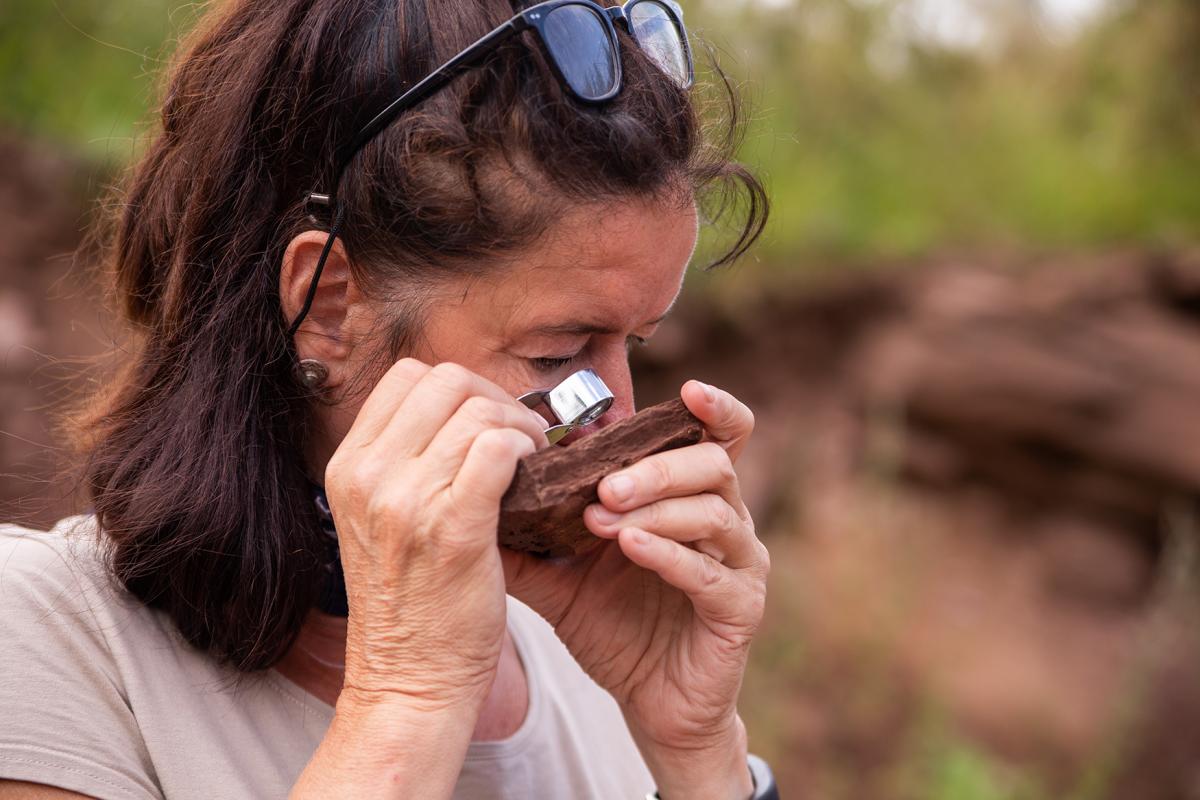 From the best preserved and largest millipedes in the history of the excavation so far to swimming tracks of primordial dinosaurs: During this year's summer excavation, the Bromacker site in the heart of the UNESCO Global Geopark Thuringia Inselsberg – Drei Gleichen proved again that it is unique worldwide. The site once again gave the international team of the BROMACKER project a deep insight into the ecosystem 290 million years ago.

Despite the heat, more than 40 scientists and students removed the reddish stone layer by layer every day for four weeks. When the excavation ends at the end of August, the researchers will have added important pieces to the puzzle that complete the picture of flora and fauna in the Lower Permian at the Bromacker. They will have moved a total of about 60 cubic metres and retrieved more finds from the rock strata than last year. These give the interdisciplinary research project new impetus and the BROMACKER project partners plenty of material for further scientific investigations.

Teams from the Berlin Museum für Naturkunde – Leibniz Institute for Evolutionary and Biodiversity Research (MfN), the Friedrich Schiller University of Jena, the UNESCO Global Geopark Thuringia Inselsberg – Drei Gleichen and the Friedenstein Castle Foundation Gotha are involved in the project, which is funded by the Federal Ministry of Education and Research (BMBF).

This year's excavation was complemented by a research boring at the nearby Hainfelsen. About eight metres of core samples were extracted here per day! With the help of the boring, the geologists want to gain insights into the depositional conditions of the Tambach Basin and obtain information on the climate and geology of the region using geochemical and imaging methods. They can use the cores to determine, for example, the temperature at the time and the composition of the precipitation water, but also biological activity, the altitude or the relative amounts of atmospheric gases.

The research only begins with the excavation and the boring: finds have to be processed and analysed now. In the BROMACKER project, scientists approach the primordial dinosaurs and their environment with five different research areas: "Biodiversity", "Palaeoecology", "Biomechanics", "Physiology" as well as "Climate and Geology". The researchers use a wide range of modern methods – from CT scans and scanning electron microscopy to photogrammetry and 3D modelling.

In recent weeks, not only the specialist community has gained a more precise idea of what climate and geology might have looked like in the Tambach Formation 290 million years ago. Even non-specialists, amateur palaeontologists, schoolchildren and tourists were able to get a better idea of the dinosaurs and the like. Action days for families, guided tours around the site and at the boring or in the BROMACKER lab in Gotha as well as social media made this possible. So anyone interested could look over the shoulders of the researchers – virtually or directly on site. Because: The Bromacker is there for everyone! Science communication accompanies the BROMACKER project on all levels and conveys the fascination of the topic and the enthusiasm of the researchers by means of state-of-the-art and experimental knowledge transfer formats. 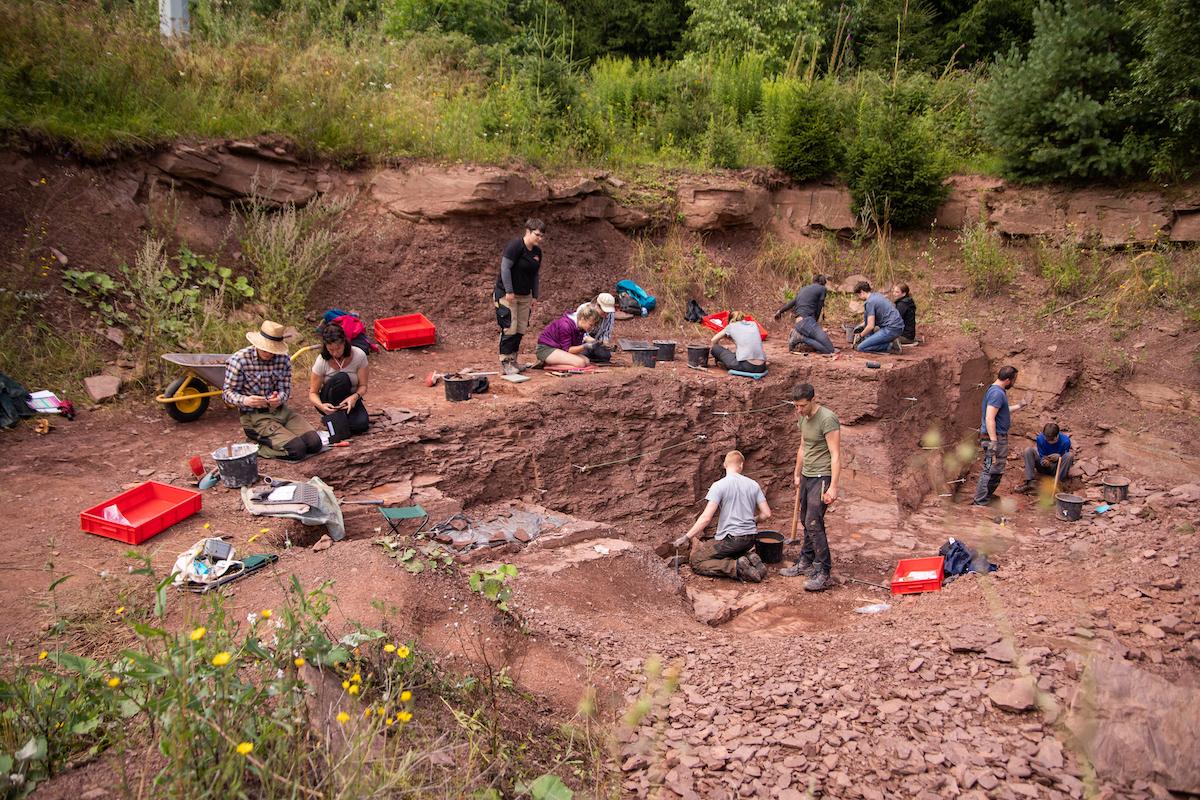 The results of the excavation at a glance

The excavation team moved about 60 cubic metres of rock this summer. The diversity and quality of the fossil finds have once again increased significantly compared to last year. Particularly noteworthy are the amazingly numerous finds of arthropods, including the best and largest millipedes in the history of the excavation so far. In addition, the team discovered numerous new imprints of insect wings as well as an unexpectedly high number of extremely rare fossil seeds.

During this year's excavation, more excellently preserved vertebrate burrows were also discovered, which can be recognised very well by the typical scratch marks. In addition to numerous single finds of bones and teeth of primordial dinosaurs, the continuation of a skeleton find from last year was also uncovered. It remains exciting to see what secrets the preparation of this special find will uncover in the coming months.

This year also saw the rediscovery of a sediment layer that was also an important guide horizon for the geological profiles in earlier years. This so-called C2 layer contained swimming traces of primordial dinosaurs as well as mass occurrences of conchostracts, shell crabs only a few millimetres in size.
The discovery of this C2 layer was an important piece of the puzzle in this year's detailed profiling of the sequence of layers in the excavation area, which was carried out separately in three sectors. These data allow us to learn much more about the changes in the environment and depositional conditions of the time. 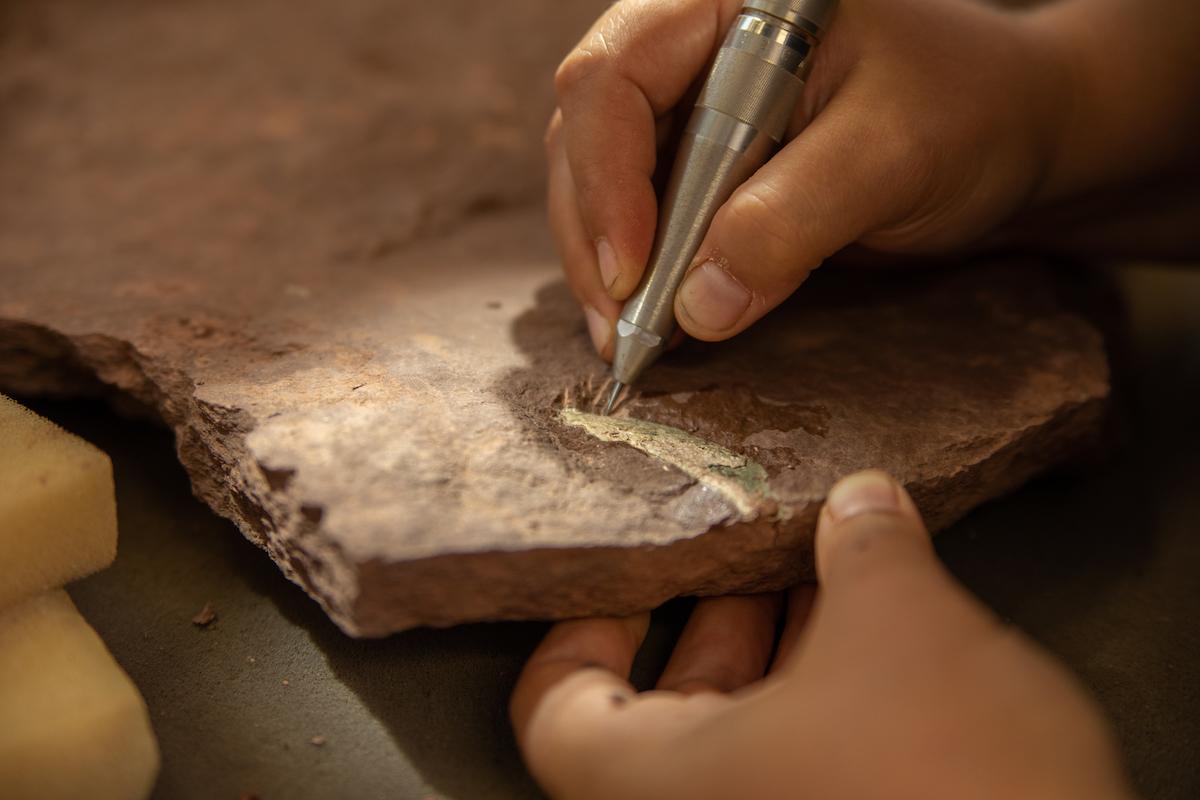