Mapping of Genetic Control Elements in the Cerebellum 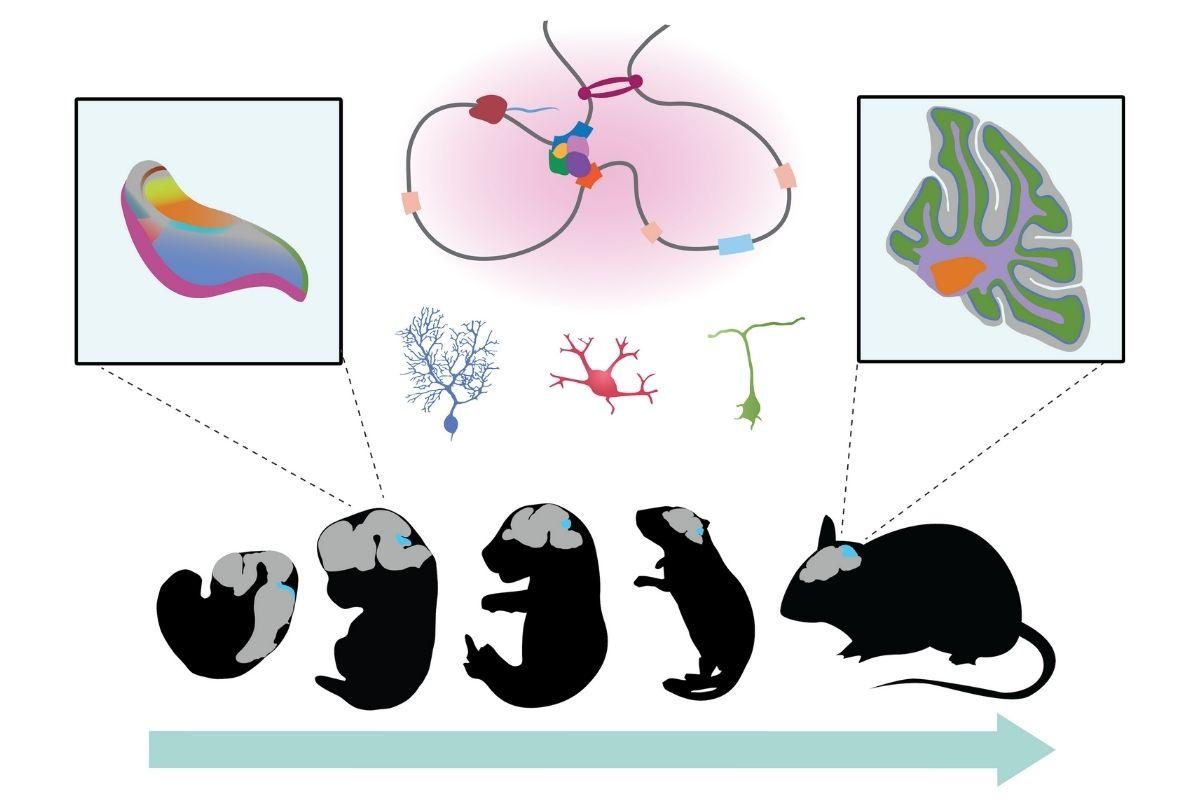 The mammalian cerebellum has long been associated almost exclusively with motor control, yet recent studies indicate that it also contributes to many higher brain functions. An international research team led by Prof. Dr Henrik Kaessmann from the Center for Molecular Biology of Heidelberg University (ZMBH) has now decoded the genetic programmes that control the development of cerebellar cell types before and after birth. The research results were published in the journal “Science” in partizipation with the Museum für Naturkunde Berlin.

The molecular biologists compared data from the mouse cerebellum with corresponding data from the opossum, revealing fundamental gene regulatory networks that must have already formed in the early stage of mammalian evolution more than 160 million years ago. The study was carried out in close collaboration with Prof. Dr Stefan Pfister of the Hopp Children’s Cancer Center Heidelberg (KiTZ).

The development of mammalian organs is controlled by the finely tuned activation and complex interaction of many different genes – also known as gene expression networks. “Although developmental gene expression in the cerebellum has already been studied relatively well, its genetic control has remained elusive,” explains Dr Mari Sepp, a postdoctoral researcher in Prof. Kaessmann’s “Functional evolution of mammalian genomes” research group. In the current study the researchers mapped, at the cellular level, the control elements of all active genes over the entire developmental period of the cerebellum in mice. They used state-of-the-art single-cell sequencing techniques for this task.

On the basis of these data and bioinformatic analysis methods, they were then able to decode the regulatory programmes that control the gene expression networks of all cells and hence the development of the cerebellum. The researchers identified more than 200,000 control elements, most of which are highly specific for individual cell types and development stages. However, some of these elements are activated in multiple cell types, especially in early stages of development.

To also understand the evolution of these gene regulatory programmes, the researchers compared their results from the mouse with corresponding data from the opossum – a marsupial that shares with mammals like mice or humans a common evolutionary ancestor dating back nearly 160 million years. According to Prof. Kaessmann, this comparison revealed a temporal pattern that is shared between different cell types. “The gene regulatory programmes of each cell type deviate more between species as development progresses,” explains Ioannis Sarropoulos, a doctoral researcher in Henrik Kaessmann’s research group.

The researchers explain that, at the level of individual cell types, these findings lend further support to a groundbreaking hypothesis on embryonic development from the 19th century: the Baltic German naturalist Karl Ernst von Baer (1792 to 1876) observed that the embryos of different types of vertebrates were more difficult to distinguish from one another the younger they were, thus pointing to progressive divergence in the development of vertebrate embryos.

The research results were published in the journal “Science”. In addition to the Heidelberg scientists from the ZMBH and the KiTZ, a joint institution of the German Cancer Research Center, Heidelberg University Hospital and Heidelberg University, researchers from the Museum für Naturkunde in Berlin, the Francis Crick Institute in London (Great Britain), and the Centre for Genomic Regulation in Barcelona (Spain) also participated. The European Research Council funded the research work. The research data are available in a publicly accessible database.

Information on the image above: Atlas of genetic control elements in the cerebellum – most control elements are specific for individual cell types and development stages. Credit: Research group Prof. Dr Henrik Kaessmann