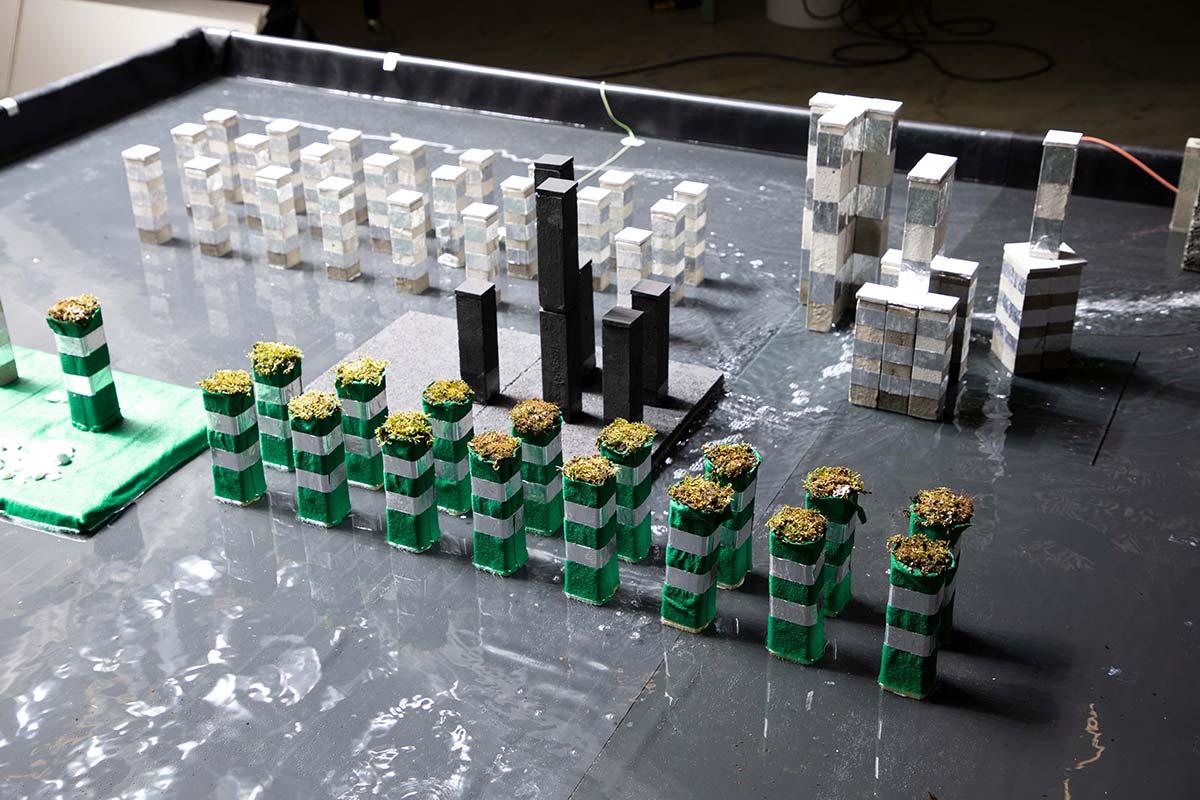 The Fraunhofer Institute for Building Physics IBP has partnered with experimental philosopher Jonathon Keats on a revolutionary urban planning scheme for extreme climate change. "Preliminary City Designs" to be revealed at STATE Studio in Berlin next month, in consultation with the Museum of Natural History Berlin.

As climate scientists forecast large-scale human migration from coastal cities to escape the effects of sea level rise over the next century, a team of engineers led by experimental philosopher Jonathon Keats is developing a radical new approach to infrastructure based on Earth’s earliest life forms. These “stromatolite cities” may support long-term occupation of vulnerable metropolises including Shanghai and Manhattan, while simultaneously counteracting one of the key contributors to greenhouse gas emissions in the building sector: the widespread use of energy-intensive air conditioning to mitigate heat stress.

“Stromatolites are the fossil remains of microbial communities that thrived on our planet billions of years ago,” says Mr. Keats. “Many kinds of organisms lived together symbiotically. In a way you can think of them as the first cities.” Moreover, Mr. Keats explains, stromatolites had to contend with challenges that our urban centers are starting to confront. “The climate in the deep past was inhospitable to complex life forms, and we’re now heading toward conditions that may be nearly as harsh,” says Mr. Keats. “We should be asking ourselves how they flourished.”

One key factor, according to paleontologists, was their habitat. Stromatolites often lived in tidal environments, which naturally moderate temperature extremes. Their interactions with these niches were dynamic. Stromatolites grew in layers, combining organic matter with sediment. Lower layers were incrementally sacrificed, becoming part of the foundation as new levels of live matter were added.

Computer modeling and insights from the lab have both informed Mr. Keats’ speculative designs for stromatolite city architecture. Working with IBP engineers, and in consultation with Dr. Richard Hofmann at the Museum für Naturkunde Berlin, he has created both concrete and wooden archetypes. “The wood ones are especially interesting to me because the building materials can be grown on the roof, loosely paralleling how stromatolites adapt by growing,” says Mr. Keats. “These skyscrapers are a cross between the Empire State Building and Abraham Lincoln’s log cabin.”