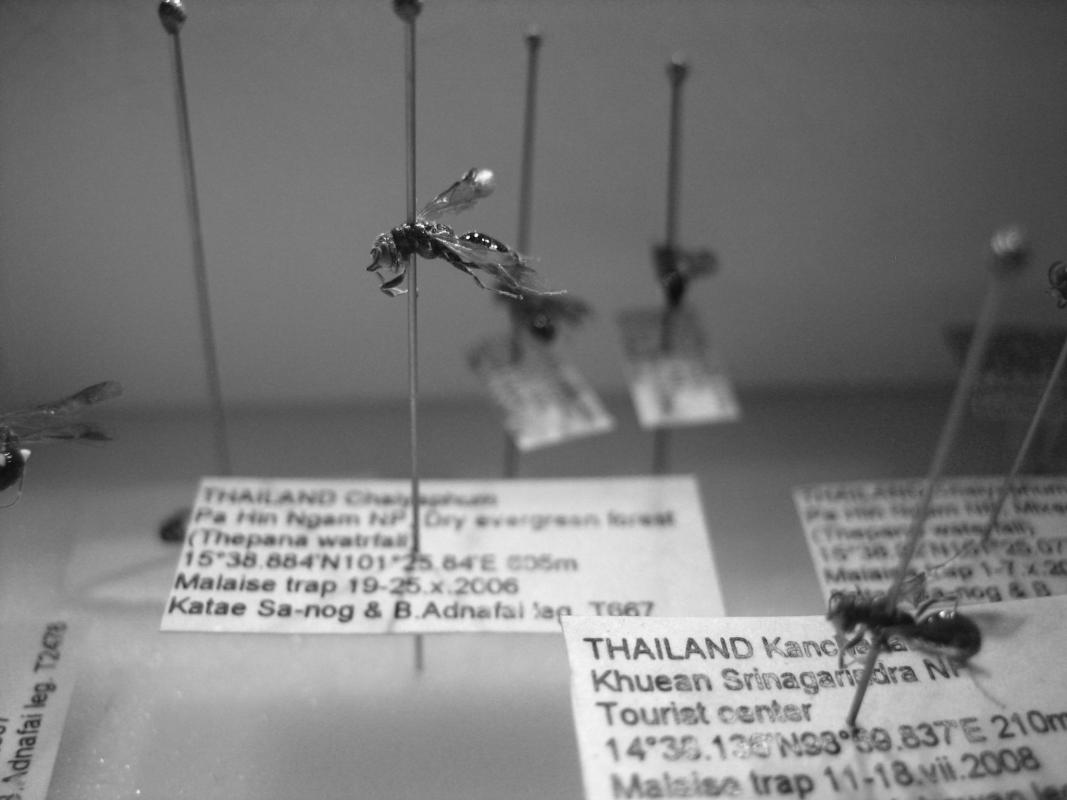 In the summer of 2008 a small digger wasp gets trapped by scientists of the University of Kentucky as part of a biodiversity survey in the north of Thailand. She is new to science and is thus sent to Lexington, Kentucky for taxonomic identification (14,226km). From there she travels on to Berlin and into the Museum für Naturkunde to one of the world’s most distinguished experts for digger wasps (7,220km). Here she is stuck now, awaiting her final description and naming before she can fly back to Thailand (8,600km). Evidently then, she’s covered quite the distance for a small, dead wasp.

In this exhibition the sociologist of science Tahani Nadim and the artist Åsa Sonjasdotter present three protagonists from the museum’s collections and their factual and imagined journeys and impulses. Because behind their apparent stillness, resting inside vitrines and drawers, lie moving stories and relations that can shift our understanding of nature and our conduct toward the world. The trajectories of our protagonists are reconstructed through three different interventions, which afford an insight into the objects' lively traffic between spaces, times and orders. On one hand, we pursue the questions of where museum specimens come from and how they made their ways into the collections. On the other, we follow the call issued by philosopher of science Donna Haraway „to stay with the trouble“, and reflect upon cosmopolitical problems rendered tangible through these movements.

The as yet to be described digger wasp features as the central character for theatrical tours into the non-public collections. In the course of these tours, Tahani Nadim will tell stories of biodiversity assessments, taxonomy and encountering and getting to know wasps. Through the format of film we raise the second protagonist, cosmic dust, mixing it with the everyday dust of the museum to trace continuities between ordinary and extraordinary practices of care and cleaning. The third figure grows out of the extant seed collection of Prof. Dr. Dieter Hans Mai that is part of the palaeobotanical collection where it is used for comparison with fossilised seeds. Here, a display presents the adventurous journey of the sisal agave (Agave sisalana) from Mexico to Tanzania and the work of the botanical central station for the German colonies (Botanische Zentralstelle für die Deutschen Kolonien).

This exhibition is part of International Museum Fellowship of the German Federal Cultural Foundation.