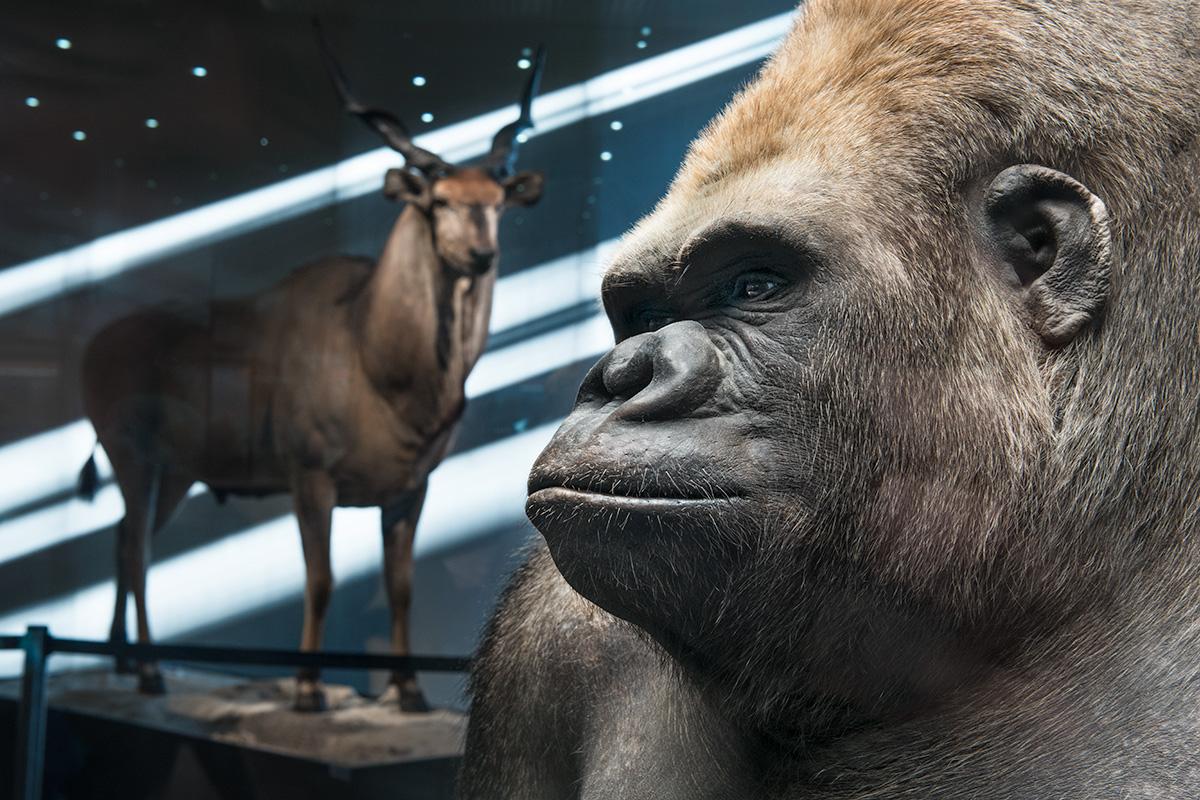 In its exhibition Highlights of taxidermy, the Museum für Naturkunde not only showcases unique specimens, but also gives visitors an insight into the work of a natural history museum.

Taxidermy is an essential part of museum work in natural history museums. After all, their reemit is to collect, research, preserve and communicate. Requirements for taxidermy differ greatly, depending on the particular purpose. When animals are prepared for the main collection, saving space is an important aspect. Of mammals and birds, often, only the skin is prepared. Skeletons must be degreased, and bones are stored in space-saving boxes. If, however, animals are mounted to be exhibited, no effort is spared to make the animal appear as natural and alive as possible.

From their early beginnings, the taxidermy workshops of the Museum have been setting high standards and developing innovative methods. Whether it is Bobby the Gorilla, mounted dinosaur skeletons or Knut the Polar Bear, not to mention several taxidermies that were awarded world champion titles – the mounted animals meet with international recognition and appreciation. The exhibition shows a selection of mounted animals that are closely connected to the history of the Museum.

Bobby the Gorilla arrived at Berlin Zoo in 1928, aged two. He died of appendicitis in 1935. The taxidermy of the animal was created by Berlin taxidermists Karl Kaestner (1895-1983) and Gerhard Schröder (1896-1945) in the same year. To this day, it has remained one of the masterpieces of taxidermy, and more than 80 years after his death, Bobby continues to fascinate visitors. This is not only due to the artistic talent of the taxidermists, but also to the use of a new technique they developed. It involved partially replenishing sparsely haired body parts with paraffin wax. This allowed preservation of fine structures in face and hands and prevented shrinking during the drying process. The water contained in the cells is substituted by solid substances such as paraffin wax or polyethylene glycol.

Knut the Polar Bear was born in Berlin’s Zoological Garden on December 5th 2006. It was the first birth of a polar bear in the Berlin Zoo in more than 30 years. However, largely unnoticed by the press, around 70 polar bears were born in Germany alone since 1970. What made this one special was that it was reared by hand – so the cuddly creature soon became an international media sensation.

Knut reached an age of only five years, whereas normally, polar bears have a life expectancy of about 30 years. He drowned before the eyes of zoo visitors. Later, the Leibniz Institute for Zoo and Wildlife Reseach (IZW) determined that encephalitis was the cause of death. The polar bear was mounted by taxidermists at the Museum für Naturkunde. In the summer of 2013, Knut became Berlin’s climate ambassador at the national natural history museum of the Netherlands, the Naturalis Biodiversity Center in Leyden. Knut enthused more than 150,000 visitors. He has been part of the exhibition “Highlights of Taxidermy” since July 2014. 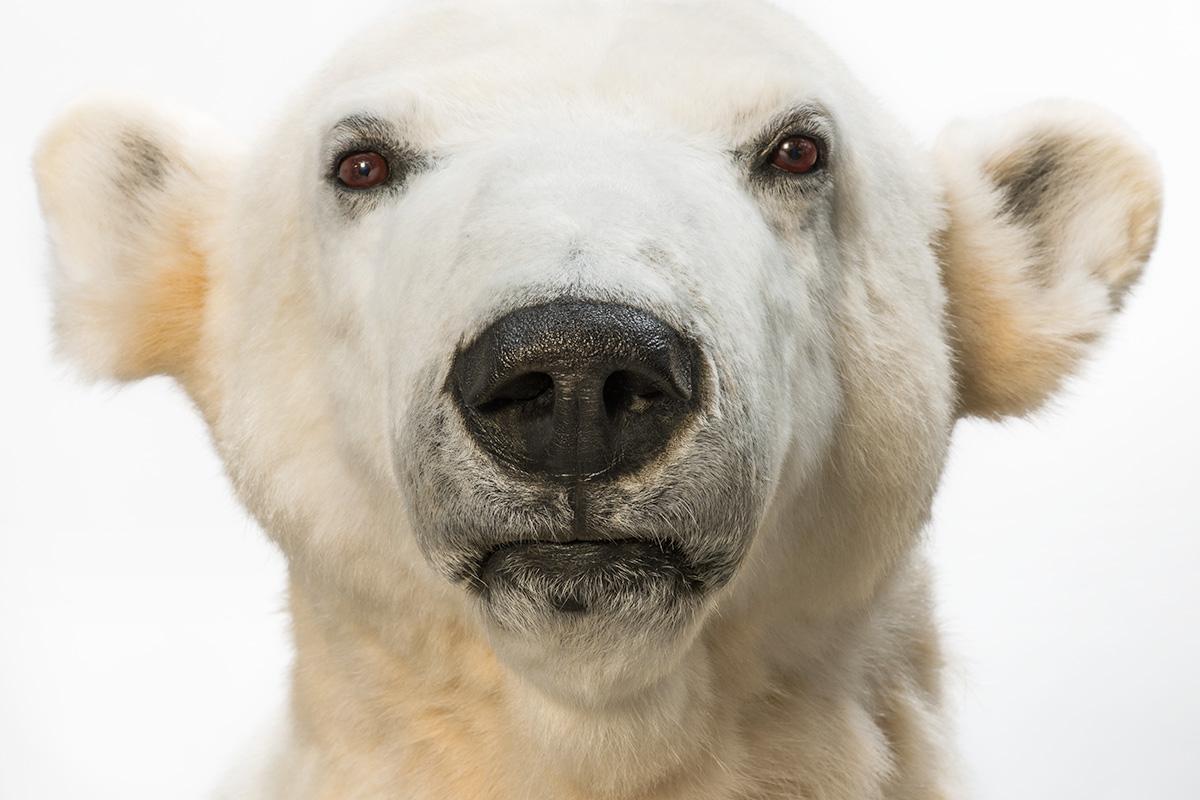 The hippopotamus or hippo for short is a member of the artiodactyla family. They are large, plant-eating mammals. The group of hippos shown here consists largely of plaster. A cast of the surface structure of the skin was taken and then painted in natural hues. Due to its thickness and fat content, the skin could not be preserved by conventional taxidermy methods. Plaster casts of one individual hippo were used to create both adults. Only their teeth are genuine. 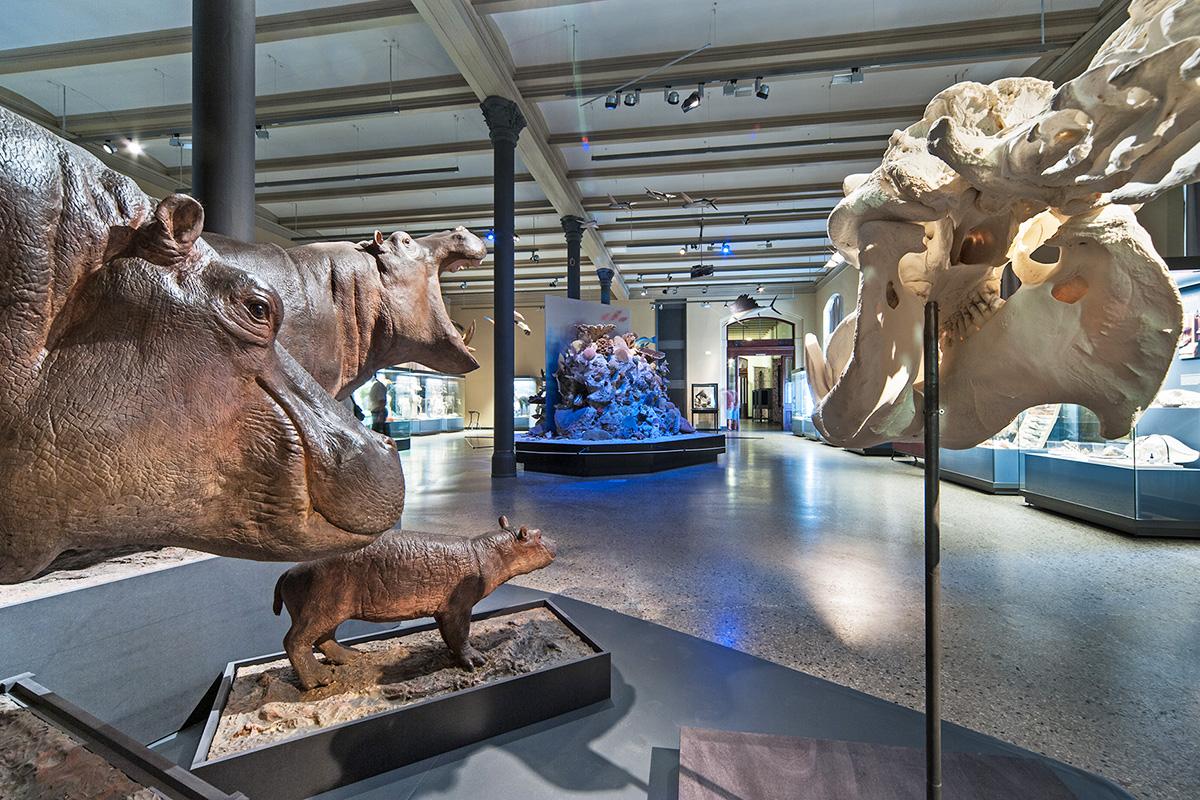 The two mounted ocelots (Leopardus pardalis) demonstrate that taxidermy has come a long way and that there is a huge difference between the stuffed creatures from the 18th and 19th centuries and the masterful, anatomically correct modern-day museum exhibits. The taxidermist who mounted the first ocelot in 1818 had never seen a live ocelot and had nothing but the skin and a few sketches of the animal, lacking basic anatomical knowledge. Gerhard Schröder in 1934, on the other hand, mounted the second specimen, having studied live animals. He also had the dead animal, complete with muscles and skeleton, at his disposal and was thus able to create a masterful, anatomically correct taxidermy that gives an impression of the live animal. 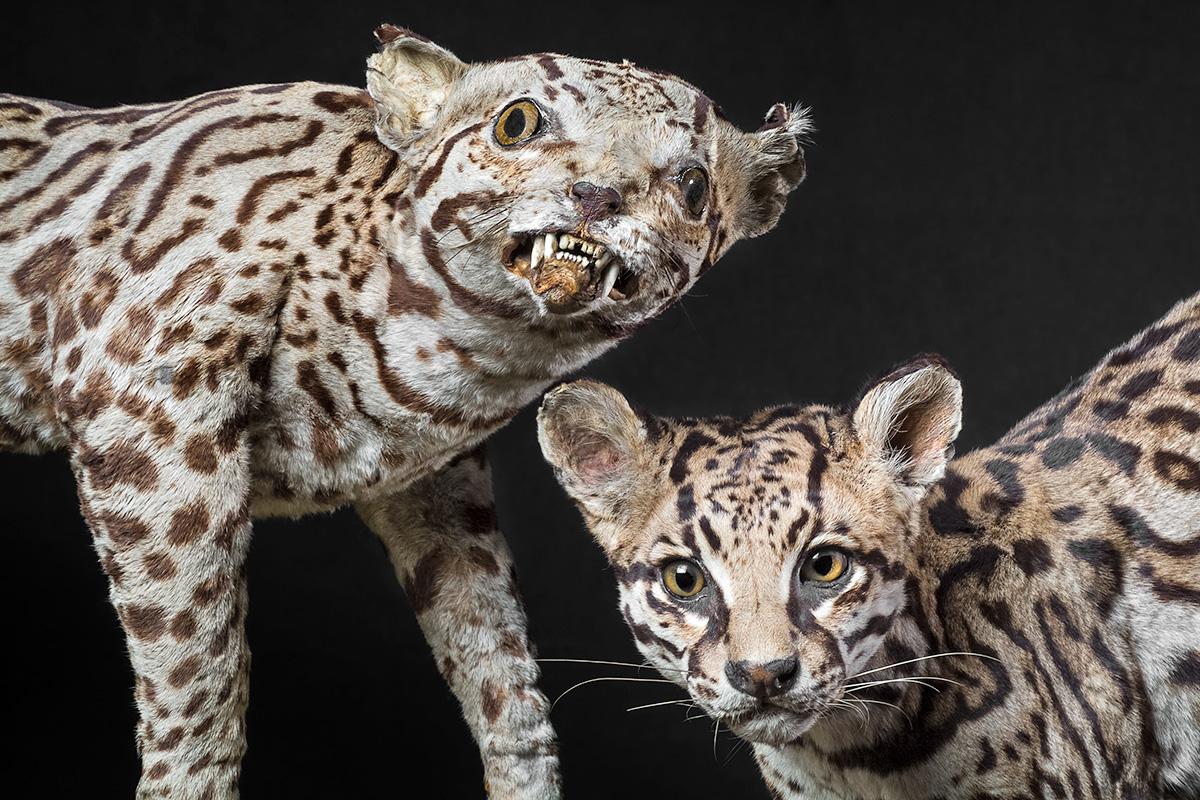 Reconstruction of a Dodo

Biological model building is a way of reconstructing extinct animal species. The model of a dodo (Raphus cucullatus), a large flightless bird on the island of Mauritius that went extinct around 1670, is an example of such a reconstruction. The basic information on which the model is based came from some skeletons and historic drawings and paintings. In a first step, the skeleton of the bird was put together, then a body with muscles was modelled in clay and finally cast in plaster. Feathers from chickens, ducks, swans and ostriches were arranged as in modern-day birds. The model was created by Karl Kästner in 1949. 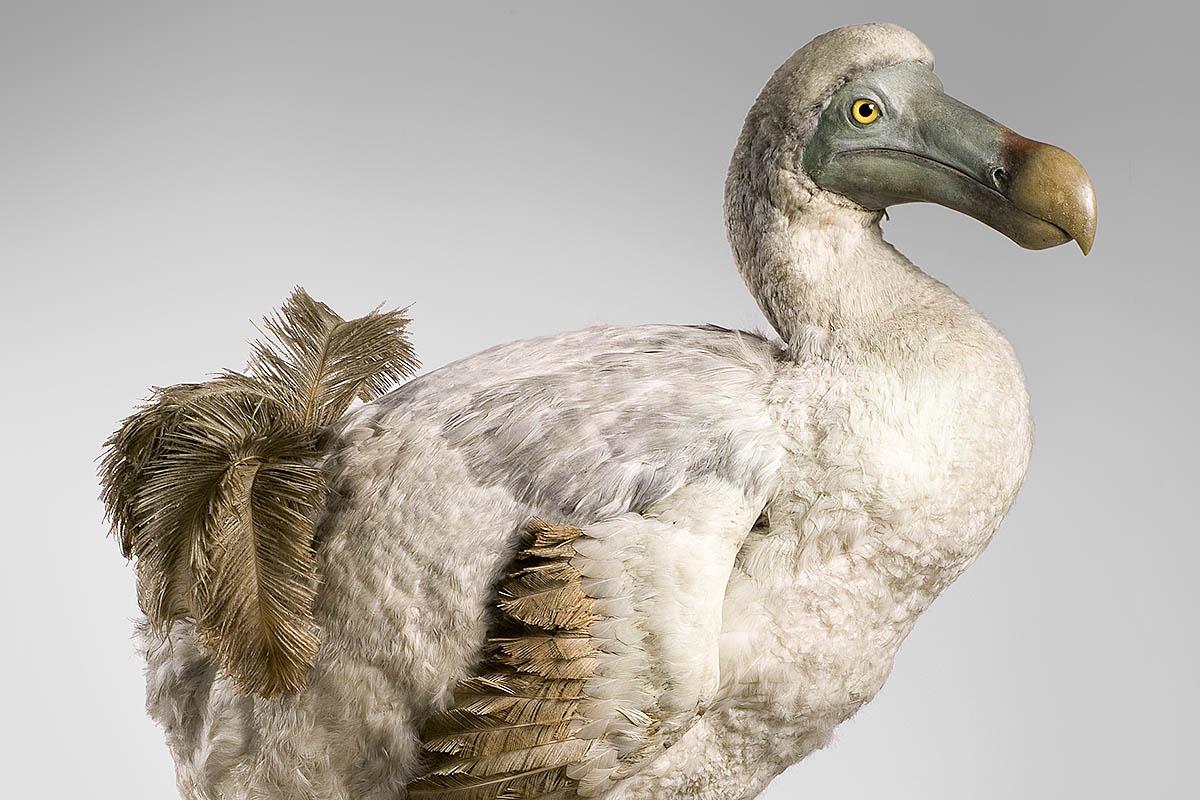 Reconstruction of an Aquatic Bird

There was no original skeleton available for the reconstruction of a flightless aquatic bird (Hesperornis regalis) that went extinct 65 million years ago. Every single bone was modelled in 3D on the basis of scientific descriptions and detailed pictures. The bones were then mounted to form a functional skeleton. The proportions of the individual bones and the angles of the joint axes permitted conclusions on the musculature and movement patterns of the fossil bird when alive. One half of the model shows the skeleton, while the other shows the outer form of the animal. It was built in 1997 by our preparator Ralf Bonke in 10 months of painstaking, detailed work. 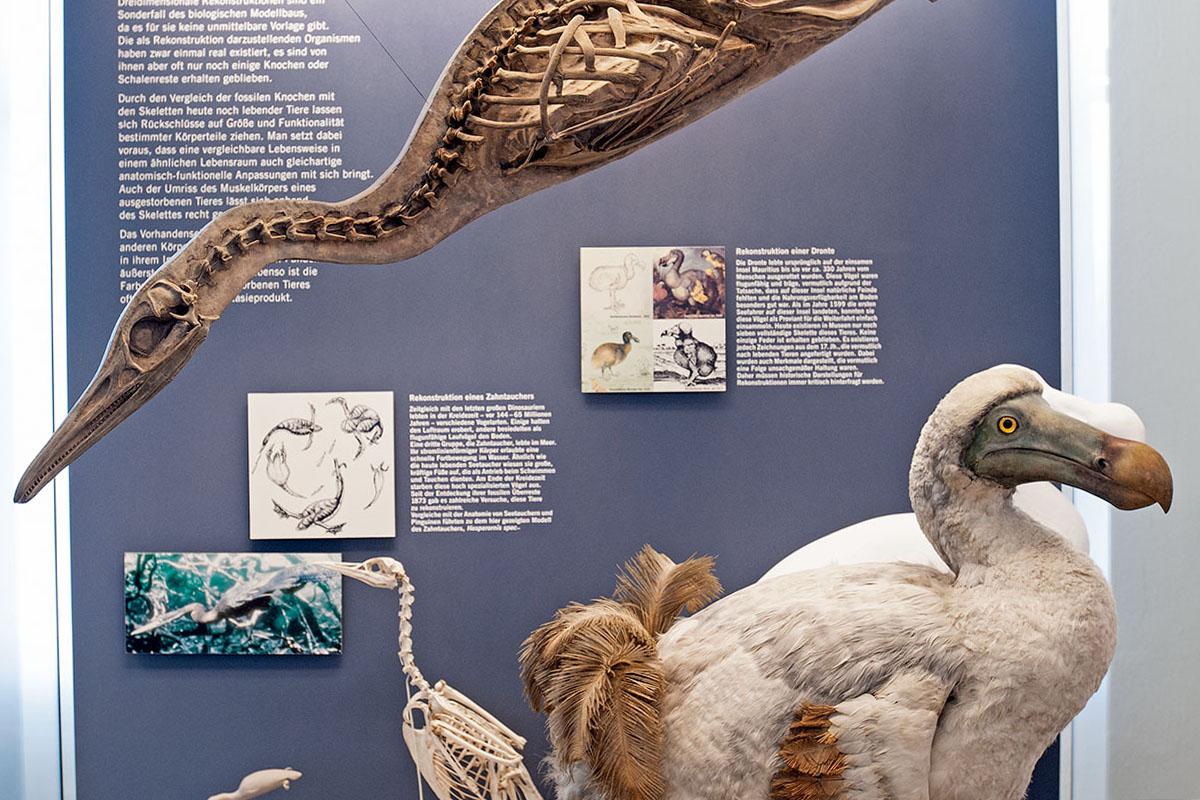