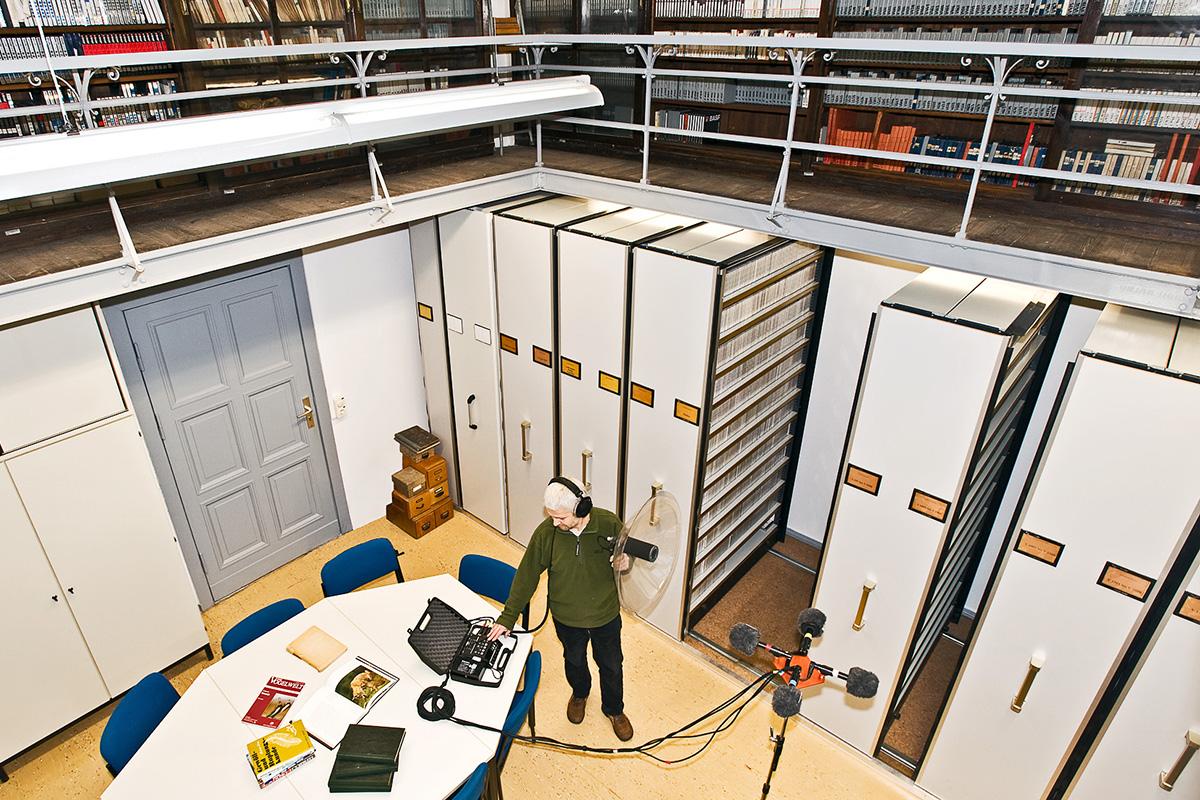 The Animal Sound Archive at the Museum für Naturkunde Berlin is one of the oldest and most comprehensive collection of animal sound recordings in the world. It comprises approximately 120,000 sound recordings including 1,800 bird species, 580 mammal species and numerous fish, amphibian, reptile and insect species. One third of the recordings were made in the natural habitat, while two thirds were made in zoos or under experimental conditions. The recordings from natural habitats originate primarily from Central and Eastern Europe. Over time, original recordings from all continents have become part of the archive.

The collection is growing continuously, not least thanks to the support of enthusiastic collectors of animal sounds who readily make their recordings available to us. Our work at the Animal Sound Archive focuses on making the collection available for scientific purposes as well as to the interested public. We are also preserving the sound material in a permanent digital database that is freely accessible. Parts of the collection have been processed for educational purposes and are available on the Schools Portal.

Development of the Collection

A large part of the collection are recordings made on magnetic tape until the 1990s. In order to preserve them, these have been digitised at a sample frequency and resolution of 96 kHz/24 bit. Most of the magnetic tapes (over 85 %) have already been secured in digital format. More recent recordings are saved in digital format only. Recordings can be accessed via the Animal Sound Archive database. More than 40,000 sound recordings have thus been made available.

The actual Animal Sound Archive was founded by Günter Tembrock (1918-2011) in 1951. The purpose of the collection was to document vocalisations of animals in a behavioural context. At first, the red foxes kept at his institute were at the heart of his bioacoustics research. Over a period spanning from January 1952 to April 1966, the acoustic communication of the animals was recorded on 345 tapes – over 20 recorded hours in total.

In the mid-1950s, animals from both the Berlin Zoo and the Tierpark were increasingly included in bioacoustics research, and the recordings made there provided the bulk of the material for Günter Tembrock’s overview of acoustic animal behaviour, published in the 1963 compilation "Acoustic behaviour of animals".

As recording equipment became more mobile, sound recordings could be made in the animals’ natural habitats from 1960 onwards. Such recordings were used by Günter Tembrock and Michael Schubert for the vinyl record produced in 1967 at Eterna, VEB Deutsche Schallplatte. This record entitled "Waldvögel" (woodland birds) was the first in a series "Stimmen der Vögel Mitteleuropas" (Birdsong from Central Europe), which became an indispensable tool for many amateur ornithologists.

While in the early years, most recordings came from the Berlin and Brandenburg area, recordings from more remote regions were added later. These include recordings by Dieter Wallschläger in connection with his ornithological excursion to Mongolia (1979 and 1983) and by Ulrich Lundberg from his Antarctica expedition (1981/82).

Since 1995, when the archive became part of the Museum für Naturkunde Berlin, the collection has been continuously expanded, not only by recordings from ongoing research projects, but also by purchasing or receiving entire animal sound collections. Thus, the Animal Sound Archive manages the entire bioacoustic bequests of Klaus Conrads, Erwin Tretzel and Gerhardt Thielcke.

Current research projects using the Animal Sound Archive are focused on topics related to bioacoustic monitoring. Advances in digital signal processing and pattern recognition over the past years make the reliable automated recognition of animal sounds an achievable possibility, on the basis of a reference database with clear recordings.