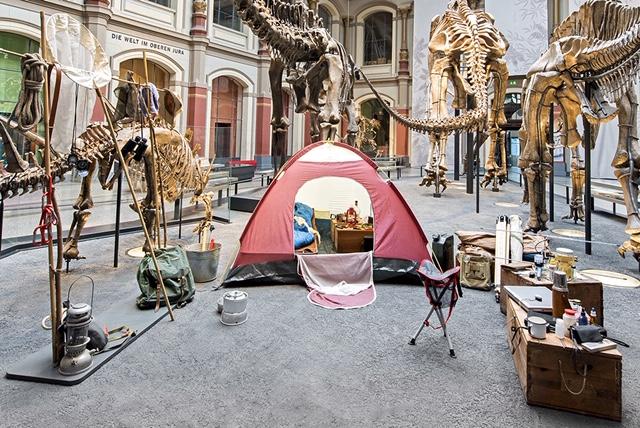 Voices in the bird hall
"I don't think the way you think," says one voice and then another: "Asunción, 1788. New Mecklenburg, 1862." Visitors stroll through the normally closed bird room of the Museum für Naturkunde Berlin. Long rows of cabinets with glass doors contain hundreds of bird specimens. The voices come from loudspeakers. It is a sound installation by the Norwegian artist A K Dolven, an artistic intervention of the "Art/Nature" programme.

The museum as an object of research
"This intervention touched me personally the most," says Anita Hermannstädter, programme director at the museum. Not only was an otherwise inaccessible hall opened to the public, but the new sounds, which were also new for museum staff, also offered an artistically expanded spatial experience. The sound installation was one of 11 interventions that were realized over four years in the model project "Art/Nature" at the museum, initiated jointly with the German Federal Cultural Foundation. In four intervention rounds, selected artists from different countries used the research institution Natural History Museum as an object of research. There were no guidelines as to the content.

Portraits from the animal viewing machine
Accompanying the exhibition of the results, the museum audience was asked how they perceive the interventions. "We were surprised at how positively our audience, which had not necessarily come to the museum because of the artistic activities, had responded to the interventions," says Hermannstädter. The positive response from the vast majority of respondents would have encouraged the museum to include contemporary art in the exhibition. The "Animaloculomat" by the artist Klara Hobza was a hit with the public and provided portraits as seen through various animals eyes. The realization was speculative and humorous, but based on the knowledge of the perception of different animals.

Art is part of it
The joint programme of the Federal Cultural Foundation and the Museum is intended to serve as a model for natural history museums nationwide and internationally. For this reason, the results were published in book form. "Our most important experience is that you have to create spaces to bring people together, so that perspectives open up, other aspects of the museum emerge and a real exchange takes place between nature, science and modern art," says Hermannstädter.