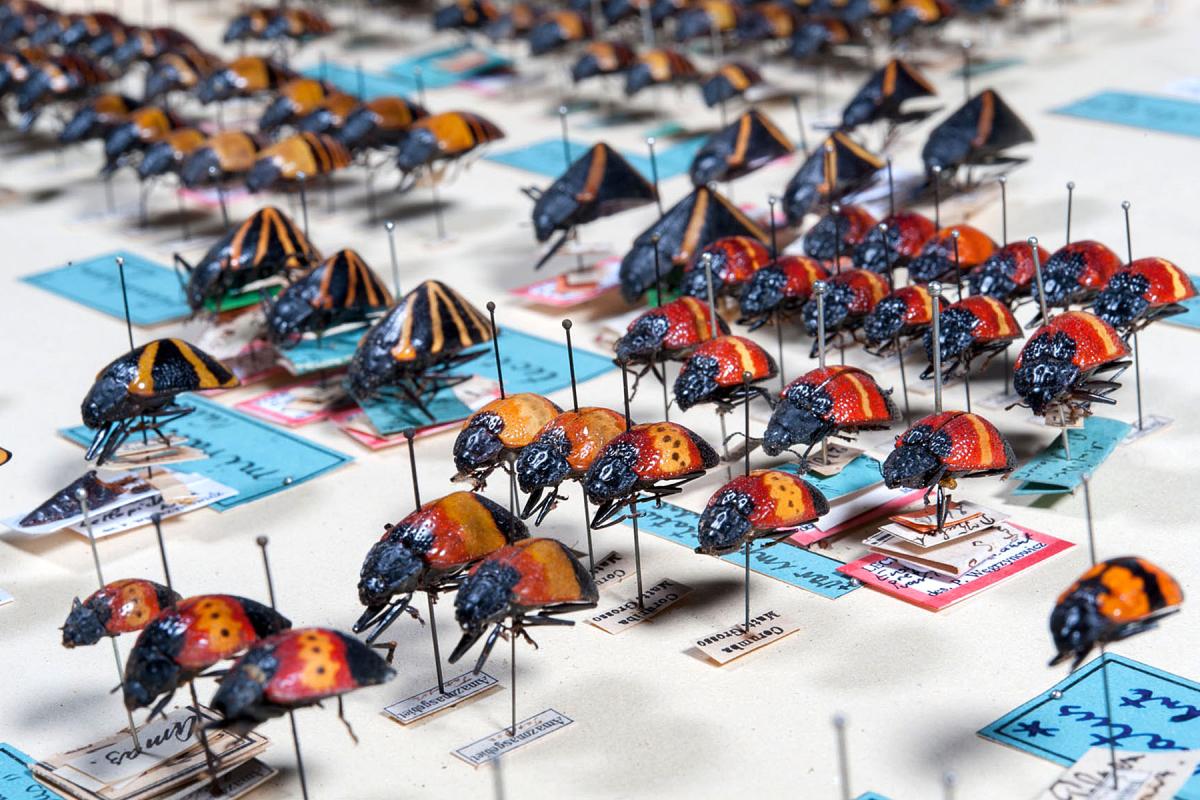 The Beetle Collection at the Museum für Naturkunde Berlin is one of the largest in the world and the most comprehensive, type-rich and significant collection of its kind in Germany. It started life in the 19th century as a main collection with a worldwide remit and has continued to be organised on these lines. It now comprises 6 million specimens and 130,000 species, of which 40,000 are represented by type material. The wet collection contains a large number of unmounted beetles and approximately 50,000 beetle larvae and pupae in 1,500 ethanol jars. The Beetle Collection also includes a smaller collection of Strepsiptera, as this insect order was long regarded as a suborder of Coleoptera.

What makes the Beetle Collection at the Museum für Naturkunde Berlin special among German museums are the following points:

The historical content of the Beetle Collection was recorded in hand-written catalogues until the 1920s. Digital documentation began in the 1990s. Up to now, approximately 60,000 species have been recorded in a database, including specifications about type material and location in the collection. Photographic documentation, mainly of type specimens, currently comprises over 700 images and continues to be expanded. High-resolution scans of insect drawers belonging to the Beetle Collection have been made available online since 2013 and can be viewed in the project EoS.

The origin of the Beetle Collection dates back to the 18th century. The oldest specimens are from around 1770. The historical stock is based on the collection of Hellwig and Hoffmannsegg, which comprised 7,000 beetle species when purchased in 1817 and contains a vast amount of type material species described by Illiger, Klug, Erichson, Germar, Gerstaecker, Gravenhorst, Harold, Herbst, Panzer, Sturm and Schaum.

During the Second World War, the Beetle Collection was evacuated and thus narrowly escaped destruction, when the Museum, including the Beetles Gallery, was bombed in 1945.

The Beetle Collection is currently one of the internationally most sought-after infrastructures for taxonomical, zoogeographical and phylogenetic research. This is reflected in high numbers of visiting scientists  and the many specimens sent away on loan.

The basis of the Staphylinidae Collection was laid by W. F. Erichson (1809-1848), first Entomology Curator at the Museum für Naturkunde. During the 19th century, the Museum received numerous type specimens of J. L. C. Gravenhorst (1777-1857). The Staphylinidae collection grew continually by taking over more specialist collections (Schubert, Wendeler, Korge) and continuous research. Its latest acquisition was the Schülke Staphylinidae collection, comprising over 150,000 specimens, including 500 holotypes and over 8,000 paratypes, making this sub-collection one of the most significant specialist rove beetle collections in the world. 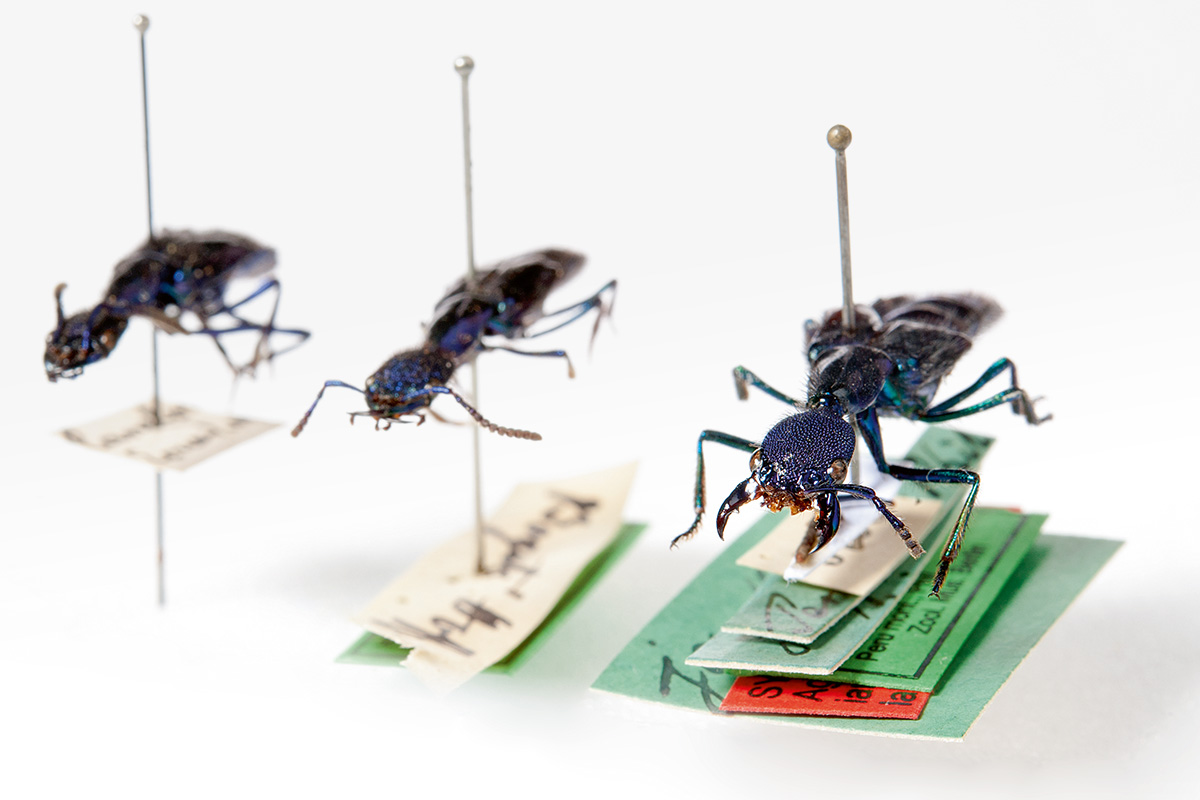 On the basis of the substantial collected material from many parts of the world during the colonial era that arrived in the Beetle Collection, former curators focused on the description of new scarab beetle species, the types of which are now part of this sub-collection. In the 20th century, the Scarabaeidae Collection grew substantially by taking over large specialist collections (Brenske, Moser, Ohaus). Due to their unusually high number of type specimens, the Scarabaeidae represent one of the most valuable and internationally most sought-after sub-collections of the Beetle Collection at the Museum für Naturkunde. 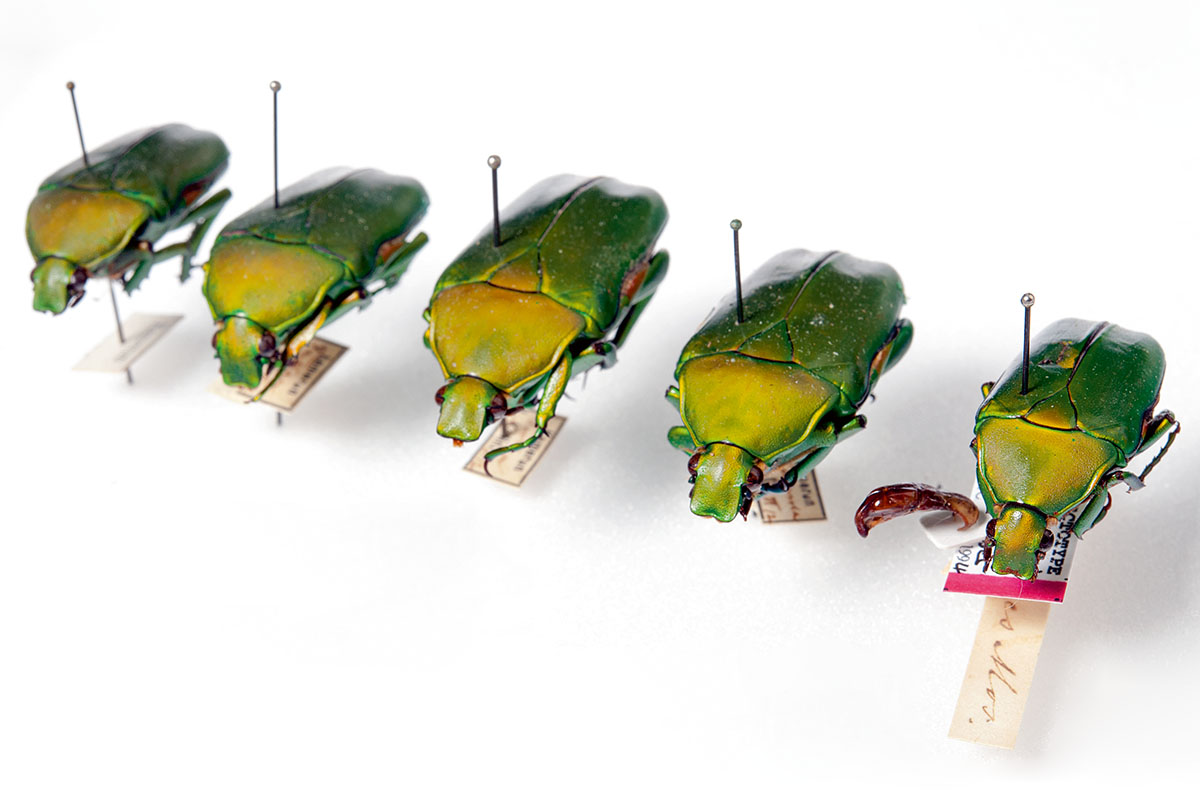 Staphylinidae (rove beetle) research became a major focus when W. F. Erichson (1809-1848) described 908 species and 46 genera, laying the foundations for a phylogenetic system for Staphylinidae. Four members of staff, some of them volunteers, are currently researching this most species-rich beetle family in the world. Current topics of research are the diversity and biogeography of the species-rich genera Scopaeus, Paederus and Erichsonius and the sub-family of Tachyporinae.

Based on the comprehensive material brought back from expeditions to the German colonies in South West Africa (Namibia), East Africa (Tanzania), Togo and Cameroon, African species became an established field of research in the Beetle Collection between 1880 and 1920, which was continued in the 1990s when numerous expedition into Southern Africa were undertaken.