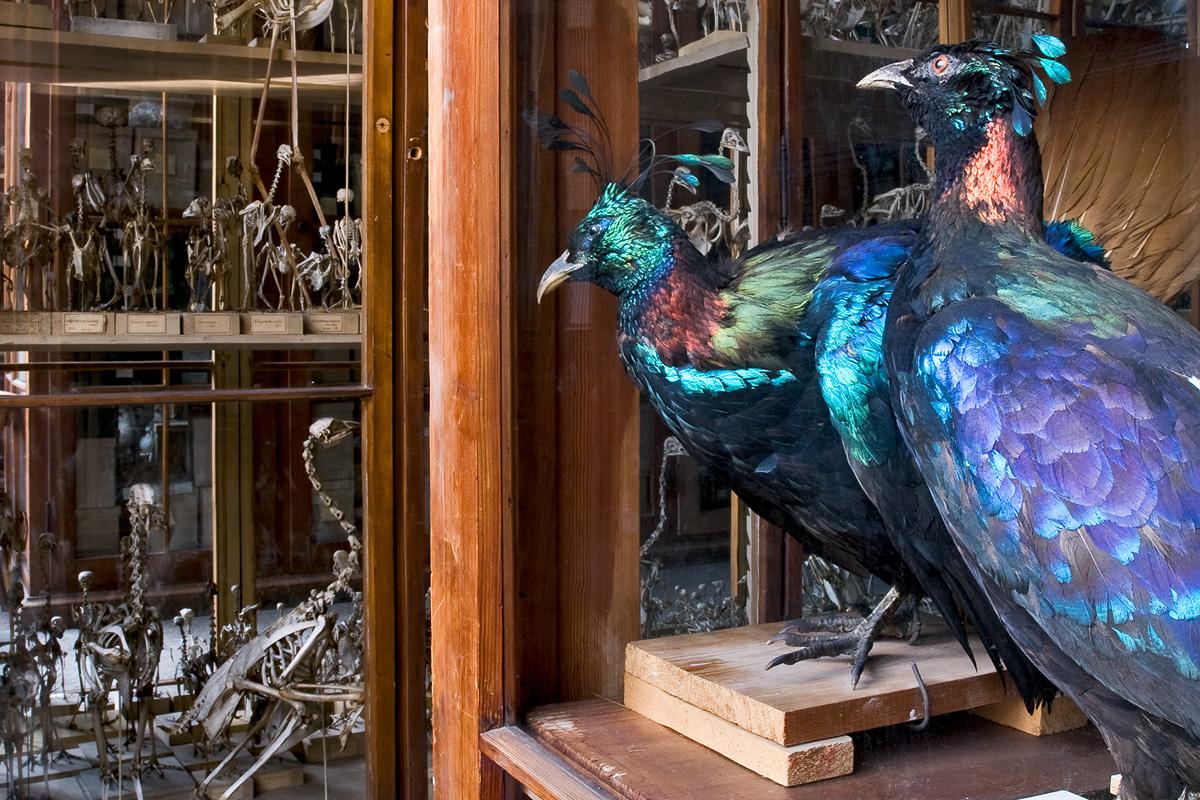 The Bird Collection comprises approximately 200,000 specimens and is the largest in Germany. Due to its diversity of species, approximately 5,000 type specimens, specimens from famous collectors and unique historic reference specimens, it is one of the most significant bird collections in the world.

Depending on which systematic approach is applied, the range of species owned by the Museum covers between 76 % and almost 90 % of recent bird species on Earth. The geographical foci lie on the birds of Brandenburg, early South American collections and colonial collections (Africa, South East Asia, New Guinea) and other large Asian collections.

The collection data are available for research on request.

Of the 5,000 type specimens 4,000 have been digitally recorded and approximately 1,000 are available on GBIF-Deutschland.

The collection’s history was shaped in particular by curators Martin H. C. Lichtenstein (1780-1857), Jean L. Cabanis (1816-1906), Anton Reichenow (1847-1941) and Erwin Stresemann (1889-1972), who researched the collection over long periods of time and were responsible for their enlargement. It was under the auspices of Jean L. Cabanis and Erwin Stresemann that the collection became the heart of ornithological research in Germany. In 1853, Cabanis founded the "Journal für Ornithologie", which became the official publication of the Deutsche Ornithologen-Gesellschaft (German Society of Ornithologists, DO-G). Erwin Stresemann was one of the most important ornithologists in the 20th century. His merit lay in moving ornithology from a mainly faunistic-systematic approach to an integral part of modern biology. He built up a comprehensive ornithological library at the Museum für Naturkunde, integrating the library of the DO-G.

As the Museum für Naturkunde received comprehensive collections from the German colonies, Africa became a geographical focus. It was especially due to Erwin Stresemann’s efforts, who instigated and organised many expeditions during the first half of the 20th century, that comprehensive Asian collections were added. The Second World War left a trail of destruction and damage. Mounted birds were particularly affected, and to this day, the damage could not be completely repaired.

The historical collection stands out as particularly significant with its wealth of type specimens and the adjoining historical library, which makes it suitable for effective research.

The collection includes specimens from the 18th and early 19th centuries, as well as specimens from famous collectors such as Alexander von Humboldt (1769-1851), Adelbert von Chamisso (1781-1838), Peter S. Pallas (1741-1811), Friedrich Sellow (1789-1831) and Ernst Mayr (1904-2005). These parts of the collections are currently reviewed and updated, ensuring that the collection data are more precise when they become available for cutting-edge scientific research. Our wet collection focuses on ontogeny (more than 1,100 embryos and juvenile birds).

There are also very specific unicates in the collection that can be found nowhere else and are important for different reasons.

This bird that was sent to Berlin for description in 1870 is probably the only taxidermy of its kind in the world. There were sightings of the bird on and off, but it took until 1998 for a team of Brazilian researchers to confirm where the species could be found in the wild. It is thought that the species is endemic to the Atlantic rainforests of Brazil, i.e. the species has always been limited to that particular environment with a low number of individual birds. It is thought that the live population is between 50 and 250 individuals inhabiting a very small terrain. They are an extremely endangered species, as the rainforest is being cut down.

The bird had had several homes before the Grand Duke of Weimar bequeathed it to Humboldt who had expressed vivid interest when visiting the Grand Duke in 1826. Alexander von Humboldt kept Jacob as a pet for over 30 years and finally handed its body over to the Museum. Along with three red-footed falcons, this is the only remaining taxidermy of a bird that once belonged to the great naturalist and is still in the possession of the Museum für Naturkunde Berlin. 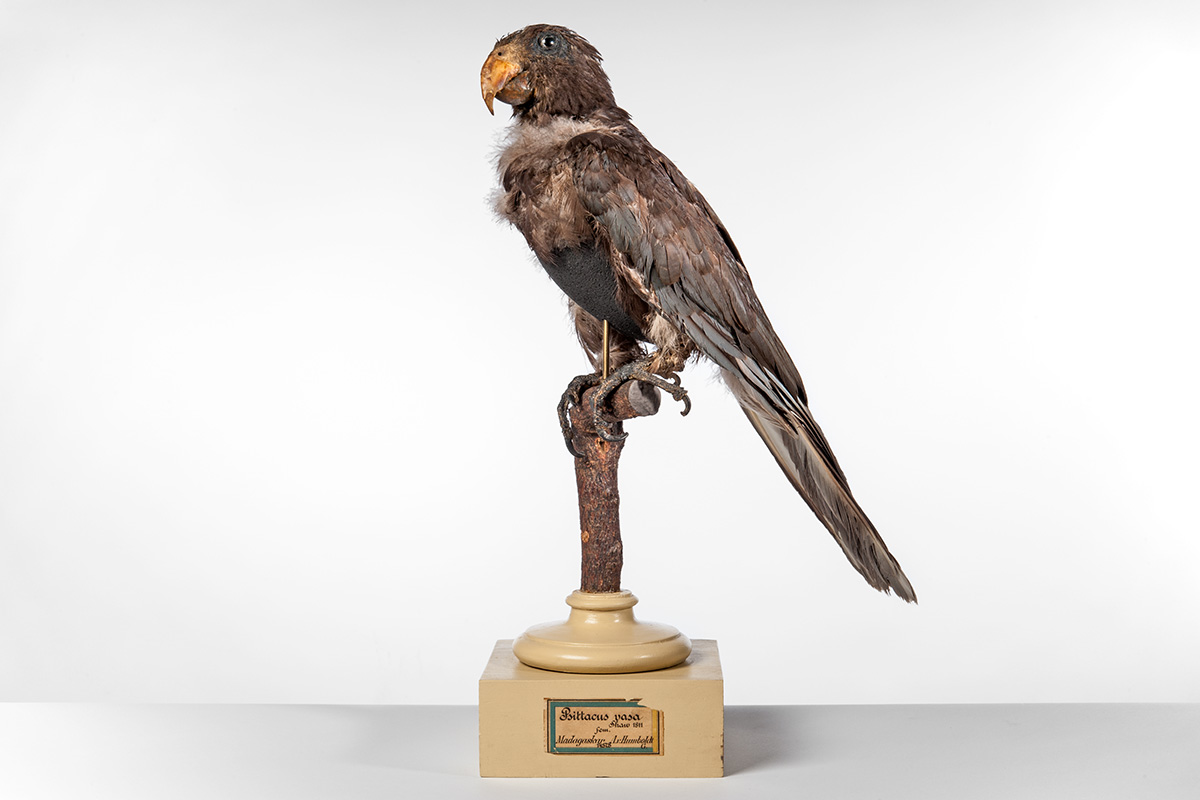 About 100 scientists per year use the collection as reference to answer their mainly taxonomic, evolutionary or environmental queries.

Other research on collection material relates to bionics, palaeontology and isotope dating.

Our own research projects primarily look at historical questions. Catalogues of important collections are compiled, type lists put together and travel routes retraced. The studies are mostly aimed at improving the usability of historical specimens for modern research. It is crucial to make information available as to which specimens can be found in our collection and which have been passed on to other collections and to have detailed collection data.
Over the past years, publications relating to historical collections, including type lists have been made available, e.g. for the W. J. Ansorge, B. Dybowski, E. Eversmann, K. Jelski, W. Hemprich, C. Ehrenberg and F. Sellow collections. We are currently working on the type specimens of Gustav A. Fischer‘s collection in collaboration with the Zoologisches Museum Hamburg.

Access to the collection must be arranged in advance with the curator.

A comprehensive ornithological library, including the library of Deutsche Ornithologen-Gesellschaft, contains 500 shelf metres of ornithological books and journals, enabling scientists to work effectively in the collection. The library was established by Erwin Stresemann, curator at the Zoologisches Museum Berlin from 1924. Its particular value lies in its historical content.