On foot through Pangaea 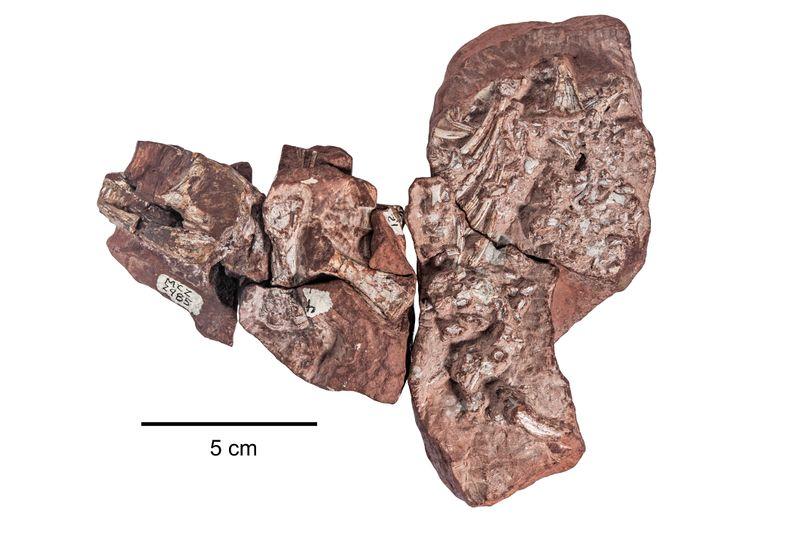 Between 390 and 250 million years ago, the first four-footed vertebrates, the so-called tetrapods, colonized new parts of the supercontinent Pangaea. The group of early amphibious tetrapods developed into amniotes that were fully adapted to terrestrial life, including reptiles, dinosaurs, birds and mammals. Already at this time, when the lineage of the terrestrial vertebrates began to branch out, ecosystems with complex communities and food webs formed.

Researchers at the Museum für Naturkunde Berlin have investigated fossils to find out, how the four-legged inhabitants of these ecosystems explored the new habitats at the end of the Palaeozoic.

"We had previously studied the diversity in this group and now wanted to focus on its geographical distribution," says Jörg Fröbisch, head of the research team. One of the questions was whether there was a single large migration of tetrapods. They could have spread after a geographical barrier such as a sea or a mountain range had disappeared. Alternatively, different groups may have moved into new areas at different times.

At the boundary of these geological ages, about 250 million years ago, the largest known mass extinction in Earth history occurred. After mass extinctions, so-called disaster taxa can occur. Their populations are growing and spreading geographically. After the Permian-Triassic mass extinction, on land such a disaster taxon was Lystrosaurus, a representative of the so-called dicynodonts from the evolutionary line of mammals.

Fossils of this herbivore, Fröbisch describes its appearance as a mixture of dachshund and lizard with a hornbeak and two tusks, were found in South Africa, Antarctica, China, India and Russia. This form is particularly common in South Africa and there are sites where Lystrosaurus accounts for about 70 percent of individuals. Fröbisch's team has developed a new method to take the relative frequency of the species into account in faunal comparisons. "If one compares the faunas through the history of the earth with our method, the species composition becomes more varied and not more homogeneous as a result of the Permian-Triassic mass extinction," reports Fröbisch.

Outliers in the family tree

In addition to the analytical methods for faunal comparison, biogeographic studies based on phylogenetic trees were also carried out in the project in order to understand the dispersal patterns of individual groups of amniotes on a global scale. In this context, Fröbisch's team examined representatives of the individual families that had previously received little attention and that were also found in places unusual for the groups.

"We then investigated where we could place these outliers in the family tree of all known tetrapods," said Fröbisch. On the basis of the position in the family tree and the geographical occurrence of these and closely related species, the researchers drew conclusions about migratory movements. It turned out that the investigated species belonged to different groups that had migrated to their respective areas at different times.