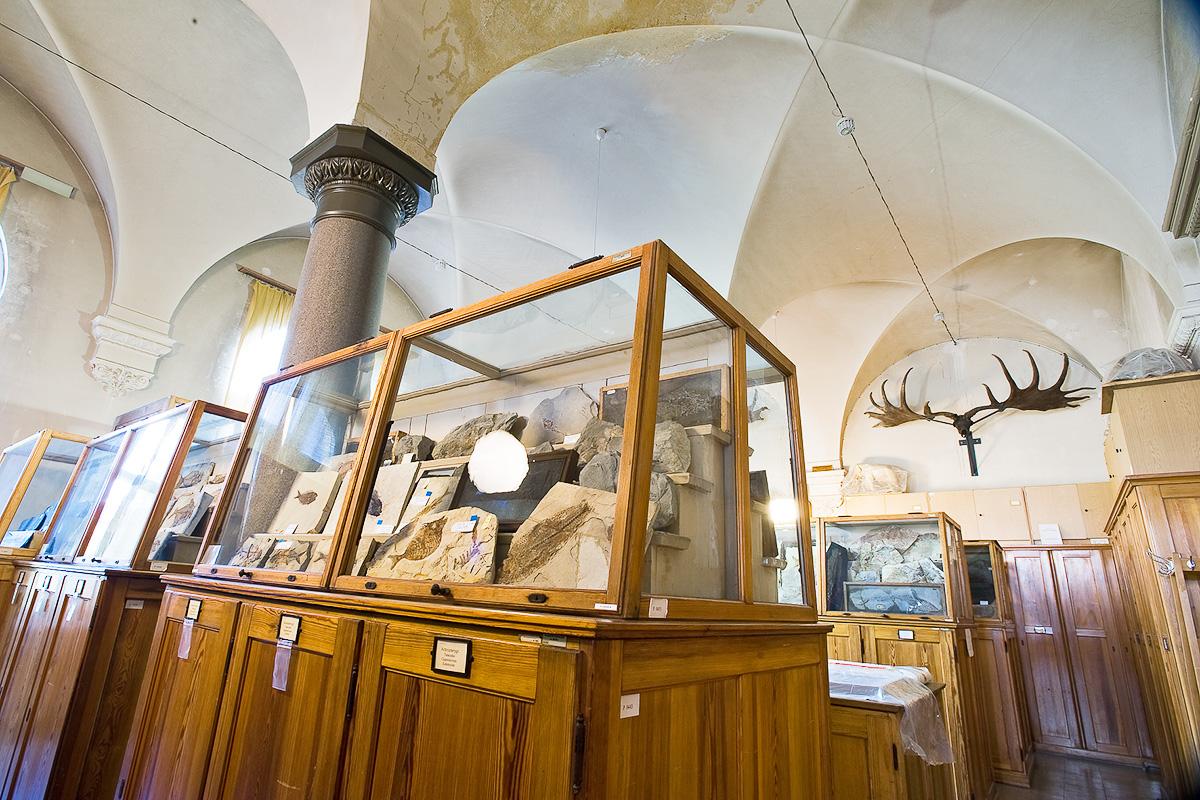 The collection comprises all major groups of fishes and amphibians from the Palaeozoic, Mesozoic and Caenozoic as well as a histological thin section collection. There is a special collection of approximately 5,000 otolith specimens from fishes.

The collection of fossil fishes comprises approximately 25,000 specimens, which makes it the second largest vertebrate collection at the Museum, after the Mammals Collection. Its scope and composition make the sub-collection of fossil fish particularly attractive to scientists and contribute to its high international significance. The amphibian collection has 1,500 specimens. Although it is considerably smaller, it is no less interesting for research, due to the many types and originals as well as fossil growth series that show the development from a larva to an adult animal. Both collections include a total of 750 types and over 1,600 originals.

For historical reasons, many finds in the collection originate from Central Europe, especially Germany, such as Solnhofen – Upper Jurassic, Odernheim – Lower Permian or Bad Wildungen – Upper Devonian. The Baltic countries and Scotland are also strongly represented with numerous Devonian finds. Some parts of the collection hail from different parts of the world, e.g. the Canadian Arctic (Devonian), the USA and the Czech Republic (Upper Carboniferous), Lebanon and Brazil (Lower Cretaceous).

The collection has been almost totally digitised, with the exception of the otoliths which are only recorded in collection catalogues. These data are accessible in-house and can be made available by the scientists in authority on request.

The collection contains one of the largest collections of fishes from the Scottish Devonian worldwide. Its Lower Permian amphibians from the Saar-Nahe basin are among the largest existing collections, containing many originals and types described by Hermann von Meyer (1801-1869) and major growth series that are of interest not only for palaeontological, but also for developmental biology studies.

This fish from the lobe-finned fish (Sarcopterygii) group is known from the Upper Devonian in the Baltic States and Russia. It is a close relative to tetrapod land vertebrates. It shares several characteristics that are otherwise only found in tetrapods. This makes Panderichthys one of the most important fossil fishes to shed light on the move to land of vertebrates in the Upper Devonian. Museum für Naturkunde owns the holotype of Panderichtys, which consists of a very well preserved right lower mandibular ramus. This piece was found in 1928 near Ehrman in Latvia on the banks of the river Aa and taken back to the Berlin collection by the Baltic-born German palaeontologist Walter R. Gross (1903-1974).

This predatory fish is up to 6 metres long and belongs to the Teleostei infraclass (bony fishes in the true sense of the word) within the ray-finned fishes (Actinopterygii). Xiphactinus is known from the Late Cretaceous period in North America and characterised by its protruding lower jaw and its big, pointed fangs. It was an inhabitant of the open seas. Its strong, torpedo-shaped build and its crescent-shaped tailfin indicate that it must have been a fast swimmer. As could be derived from the content of its stomach, it was able to swallow very large fish and has hence been nicknamed the Tyrannosaurus rex of the seas. The specimen in the Museum has an unusually well preserved skull and parts of the front body. It originates from Lane County, Kansas, USA and was purchased in 2009. 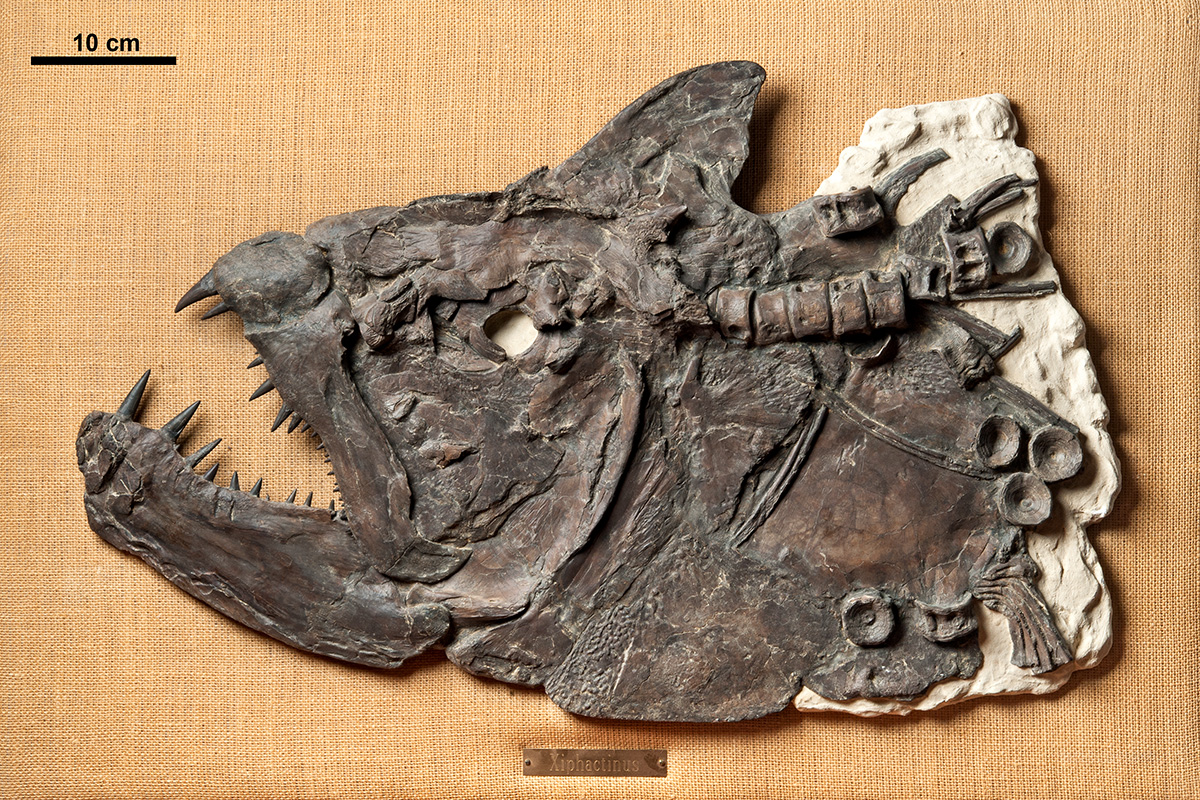 Jawless fishes or agnathans were the first fishes in geological history and very common in the Palaeozoic, whereas today only lampreys and hagfish survive.  Furcacauda is a jawless fish of the Thelodont group, of which usually, just a few isolated scales are found. Museum für Naturkunde has an unusually complete Furcacauda specimen, found by a former Director of the Museum, Hans-Peter Schultze, in 1998 in the Lower Devonian deposits of the Mackenzie Mountains in Canada. The forked tailfin which gave the species its name is clearly visible, as well as a number of round gill openings behind the eye.

This specimen has not been named. It is the impression of a palate of a small skull that was found in Lower Carboniferous limestone near St. Louis, Missouri (USA). The piece was handed over to Museum für Naturkunde by Greifswald palaeontologist Otto M. J. Jaekel (1863-1929) in the early 20th century, when the skull was thought to belong to a Coelacanth. However, in 2012, an international team of researchers demonstrated that it was not the skull of a fish, but of a tetrapod, a member of the Colosteid family. Colosteids are early stem group representatives of tetrapods that breathed through gills like fish. The Berlin specimen is the oldest post-Devonian tetrapod fossil from the USA.

Apart from some single rib fragments, there is only a skull remaining from this species. It was found at the Predigtstuhl on the West Coast of German island Heligoland in Lower Triassic sediment (Buntsandstein) in 1910. Parotosuchus was a group of giant amphibians of the Triassic period, known as stereospondyls, which resemble crocodiles and could reach a length of several metres. This skull is not only very decorative, but has also high scientific significance. Due to its unusually complete and three-dimensional state of preservation, it was possible to reconstruct the head musculature of the giant amphibian and to carry out a biomechanical study on the distribution of forces that acted on the skull during feeding.

This small amphibian species found in the Lower Permian lake sediments in Rhineland-Palatinate mostly remained at a larval stage and breathed via external gills. This specimen was found by Ernst Edinger near Odernheim and purchased by Museum für Naturkunde in 1998 as part of a larger collection. Detailed studies of this specimen showed that there are malformations at its front as well as its hind legs, which could be interpreted as failed regeneration. It could thus be demonstrated that even early tetrapods had the potential for leg regeneration, an ability only preserved in today’s salamanders and newts.

The collection of Fossil Amphibians in connection with the collection of Fossil Fishes is particularly well suited to document the move of vertebrates from water to land during evolution, which is a current research focus at Museum für Naturkunde. Significant Palaeozoic agnathans are also part of the collection. They are important in the study of the evolution of teeth in the jaw. The histological section collection stands for the development of a new innovative specialism: palaeohistology, which can be applied to evolutionary and physiological problems, but can also be relevant for medical-pathological studies (palaeopathology).

Material from this collection can be studied in the collection hall itself or nearby, where temporary work places are available. The items can usually be studied macroscopically. Binoculars can be made available, upon request also with a drawing mirror or photographic attachment. Polarisation microscopes can be used to study thin sections. Thin sections are still made of various vertebrate palaeontology specimens. Samples are often taken in-house, and the thin sections are either produced on location or in other institutions.