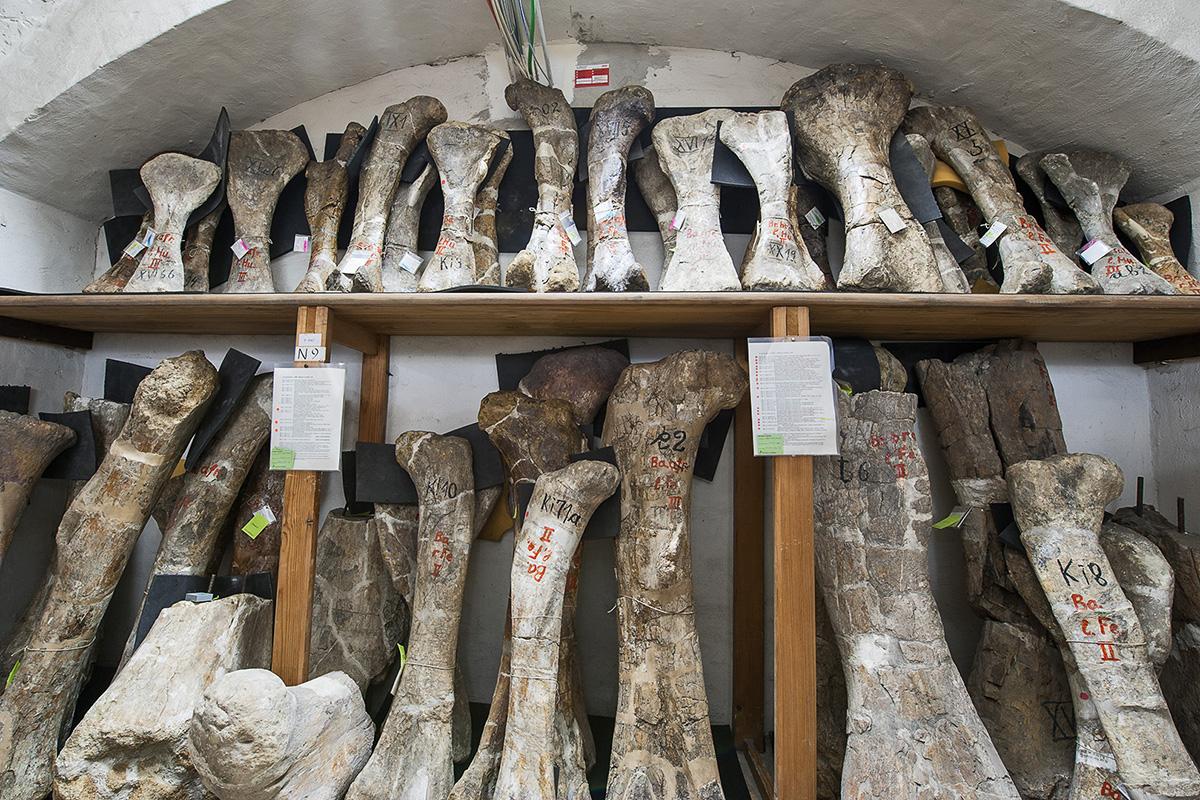 The collection of fossil reptiles is largely organised with respect to major systematic groups. However, due to their large size, dinosaur bones had to be stored according to bone categories and size. The collection is a dry collection which is mainly housed in the museum building. The collection material consists entirely of fossilized bone and casts of footprints.

Within the collection of fossil reptiles, there is a sub-collection of fossil tetrapod ichnofossils. It includes famous fossil tracks (Chirotherium, Ichniotherium), mostly from the Triassic, for example at Hessberg near Hildburghausen in Thuringia. Several fragments of a large Triassic slab with tracks came from the collection of amateur palaeontologist Hugo Rühle von Lilienstern (1882-1946), containing the oldest known turtle footprints.

Geographically, the collection of fossil reptiles focuses on Mesozoic dinosaur discovery sites at Halberstadt, Central Germany, and Tendaguru, Tanzania. At the beginning of the 20th century, both sites yielded a plethora of dinosaur remains for the vertebrate collection. Another focus is the Germanic Triassic collection that contains remains of the marine reptile Nothosaurus from the Rüdersdorf Muschelkalk. Other marine reptiles include pristinely preserved and recently re-prepared remains of ichthyosaurs from Holzmaden. There are also many fossil reptiles from lithographic limestone in the Altmühl valley in Franconia.

Most collection items have been recorded and assigned a number and can be found in a catalogue according to location. Only part of the collection has been digitised and is so far not publicly accessible. Due to the increasing number of modern analytic methods, 3D and volume data are available for many specimens. Access to these data is available on demand.

The collection of fossil reptiles originated in the Berlin Mining Academy collection that then became part of the "Königliches Mineralienkabinett" (Royal Mineral Cabinet). When the Berliner Universität was founded in 1810, the "Königliches Mineralienkabinett" became the "Mineralogisches Museum" and as such was part of the University. It was moved to the first floor of the East Wing and the Central part of the University building Unter den Linden in 1814. One example of the Kabinett collection is the turtle Testudo antiqua from the Miocene at Hohenhöwen in Hegau. Further reptile remains were soon added.

The collection was shaped by several generations of curators and scientists such as Otto M. J. Jaekel (1863-1929) and in particular Werner E. M. Janensch (1878-1969) who led the German scientific Tendaguru Expedition (1909-1913), as well as curator emeritus Dr. Wolf-Dieter Heinrich and Dr. Gottfried Böhme, who played an eminent role.

The excavations in Halberstadt between 1909 and 1913, led by Jaekel, were a major undertaking in order to expand the collections. The excavations were interrupted by the First World War, but continued afterwards until 1927. The Halberstadt site yielded not only the Upper Triassic dinosaur Plateosaurus, but also the oldest known and fully preserved stem turtle Proganochelys.

The fossil reptile collections continue to be expanded, but this is now done mainly by exchanging plaster casts and specimens, receiving donations and purchasing specimens. There are currently no ongoing systematic excavations for the purpose of expanding the collection.

The marine reptiles from Holzmaden, Southern Germany,  were integrated into the collection during the second half of the 19th century. They mainly include ichthyosaurs such as Stenopterygius and Eurhinosaurus, but also Plesiosaurus and the fossil marine crocodiles Steneosaurus and Pelagosaurus. They are some of the best-preserved remains from this site, sometimes even with the skin preserved. The fossils come from the Mid-Jurassic period and were deposited in a seabed with not much aeration. They are historical parts of the exhibition, and the restoration work recently undertaken on the specimens is outstanding. Due to ongoing building work at the Museum, they are not accessible to the public at the moment. 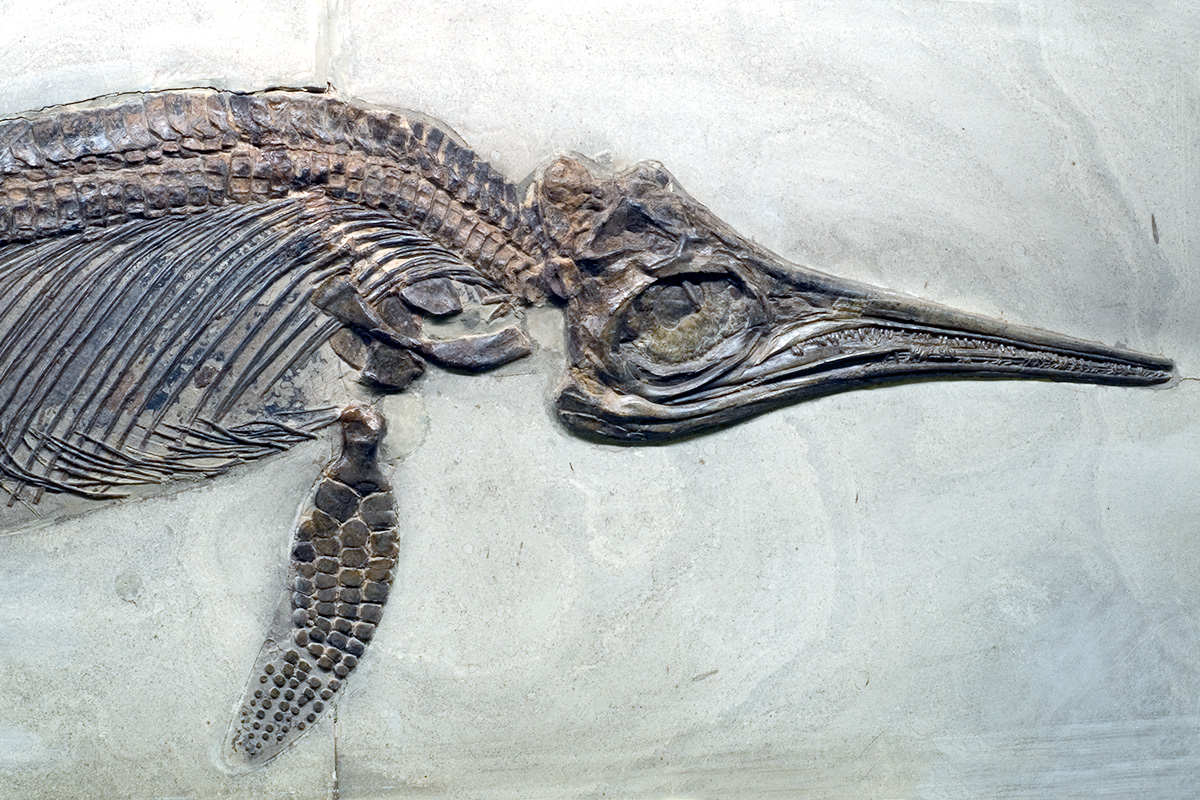 Giraffatitan brancai is the figurehead of the German Tendaguru Expedition (1909-1913). The skeleton was put together from two well preserved partial skeletons. It is currently the tallest dinosaur skeleton on display in the world. The original skull is kept in the collection, while a copy has been mounted onto the skeleton in the exhibition. The vertebrae of the neck and trunk are also copies, as they were too heavy and brittle to be mounted. These bones have also been preserved in the collection and are often studied by scientists. In 2009, a scientific revision took place and the name of the animal was changed from Brachiosaurus to Giraffatitan, which is now used in academic work. 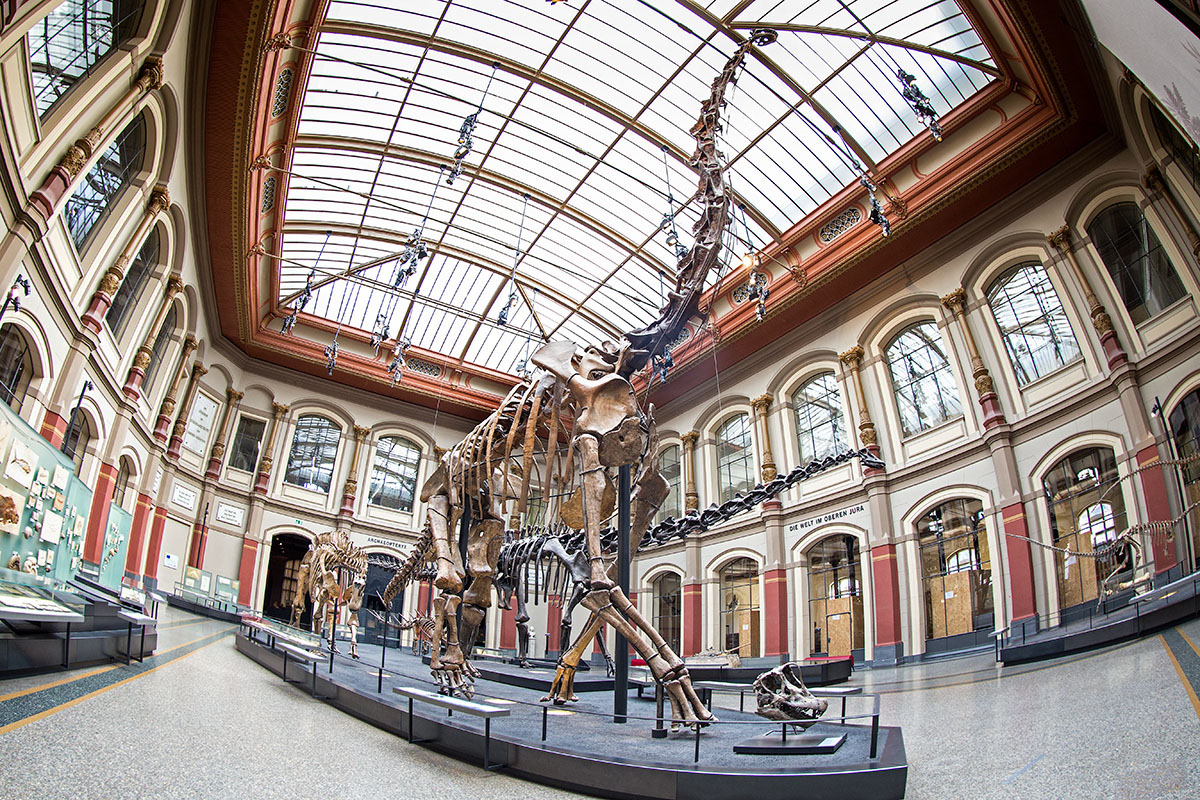 Research in the Fossil Reptile Collection touches on all contemporary topics of reptile research – systematics, ecology, and biomechanics, to name a few. The tracks of fossil vertebrates are evidence of their movements and behaviour and are often used in the context of functional morphology.

In the past as in the present, dinosaur fossils have been used predominantly for comparisons with other finds. Current research involves not only inspection of the specimens, but also analytical methods such as isotope identification, preparing thin sections and non-invasive analytical imaging techniques, such as 3D-surface generation, CT scans or µCT.

Visits for study purposes are usually arranged via Curator or Collections Management. There are computer workstations in the collections where specimens can be studied on location. If you want to take out a specimen on loan, take samples or use other analytic methods, you can discuss options and methods with the curator. Specimens from the Tendaguru dinosaur collection are not on loan. The large dinosaur skeletons from Tendaguru that are on display in the exhibition can only be studied directly on Mondays when the Museum is closed to the public. Special appointments will have to be arranged for the fossil tetrapod footprints. It is, however, possible, to work with specimens in external storage.