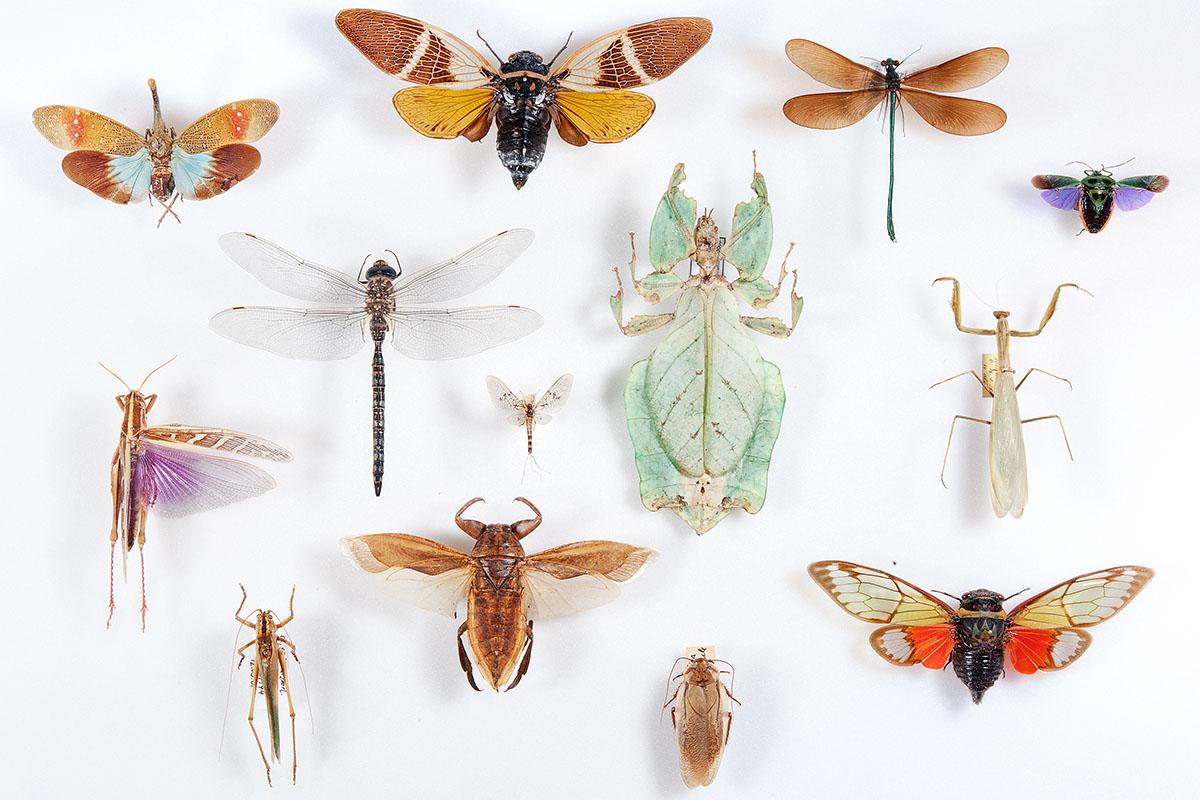 The Hemimetabola Collection maintains much more than a million specimens. Hemimetabola describes insects with incomplete development, as found in bugs, cicadas, termites, cockroaches and grasshoppers. This is a historical category, based on similarities in the development of individuals in which juvenile stages very much resemble the adults. It does not designate genetic relatedness.

Bugs and cicadas (hemiptera) provide the largest proportion of species and individuals - 620,000 and at least 11,000 species. There are holotypes of approximately 2,000 species. The Orthoptera collection comprises approximately 300,000 specimens and 3,000 primary types – which makes it one of the most significant grasshopper collections worldwide and the largest in Germany. There is also a historical collection of plant galls caused by a variety of insect groups.

The collection material is mostly stored in insect cases as pinned dry specimens. In addition, there are numerous microscope slides, especially of bird lice (Mallophaga). A considerable proportion of the specimens is stored in alcohol, comprising approximately 13,000 jars – the most comprehensive entomological collection at the Museum.

The collection has a worldwide scope, with a geographical focus on Africa, in the historical as well as recent collections. Furthermore, there are many specimens from South America, the Middle East and Palaearctic region (Northern Africa and the entire Eurasian region) in the collection.

The oldest parts of the collection are over 210 years old, dating back to a time before the Museum für Naturkunde was founded. Due to its age, volume and number of type specimens, the collection is invaluable from a historical as well as a scientific perspective. A large proportion of specimens comes from expeditions to Africa in the 19th and 20th centuries that took scientists to Africa, South America or the Sunda Islands. Over the past 20 to 30 years, the collection has been replenished with material originating mainly from Africa and Europe. Type specimens from 150 authors, including Breddin, Burmeister, Distant, Erichsson, Fieber, Gerstäcker, Jacobi, Karsch, Klug, Melichar, Panzer and Stål, are kept at the collection as voucher specimens or reference for species description. Famous naturalists such as poet Adelbert von Chamisso, Christoph G. Ehrenberg or Johann C. von Hoffmannsegg, who initiated the foundation of the Zoological Museum, brought back material for the collection from their travels. Martin Lichtenstein, Director of the Zoological Museum from 1815 to 1857, brought back insects from his stay in South Africa between 1804 and 1805. These are still kept in the collection.

A type collection by the well-known physician and entomologist that was long thought to be lost is now part of the collection. Günther Enderlein was curator at the Museum für Naturkunde from 1919 to 1937. He published more than 500 scientific articles, mostly about entomological topics. He represented the field of comparative morphology like no other and was an international expert in his field. After his retirement he found a new scientific focus in bacteriology.

Type specimen of Peirates balteatus, a predatory bug from the Cape of Good Hope in South Africa

The type specimen of Peirates balteatus, a predatory bug from the Cape of Good Hope in South Africa was collected by Lichtenstein in the early 19th century and described by Germar, a German entomologist from Halle. This bug is one of the oldest specimens in the collections.

The collection is used regionally and globally for various research projects. The collection specimens are indispensable vouchers for the determination and description of species. They allow the study of adaptation and are the basis for research in evolutionary biology, genetic analysis, the study of historical changes of habitats or the study of the distribution history and current distribution of a species. Specimens from different regions of the globe and from different decades and centuries can be compared. It is difficult to foresee what other research options may be in store in the future for these collection items, what new puzzles they may be able to solve and what new methods may be applied. Several years ago, it seemed unimaginable that it would be possible to extract DNA and other substances from collection items that could then be used for genetic analysis and evolutionary biology research.

Apart from the types that are always referred to when comparing and determining different species, there are further invaluable treasures to be brought to light – material that is yet to be viewed and described.

The study of evolutionary mechanisms and adaptations of black-and-red bugs (Lygaeinae) to their host plants is a particularly exciting field of research. The evolution of these bugs – of which there are several hundred species globally – is closely connected to their adaptation to extremely toxic host plants. Physiological adaptations allow them to absorb the toxins and store them in their bodies without coming to any harm. These toxins protect them from predators. Potential attackers are warned by the striking black-and-red pattern not to touch the poisonous insect. The species often closely resemble each other and not all of them have as yet been identified and described. To find out if certain bug species rely on poisonous plants and which species use which plant, a thorough knowledge of the biology of the various species is required, as well as extensive field studies and experimental lab tests. The black-and-red bugs that have been part of our collection for decades come into their own, as they can be tested for any stored toxins. This can be done without destroying the specimen, which will be available for further morphological comparisons.

The collection library contains literature about the insect groups that form part of this curatorship, including important catalogues and monographs. There is also a comprehensive collection of reprints.