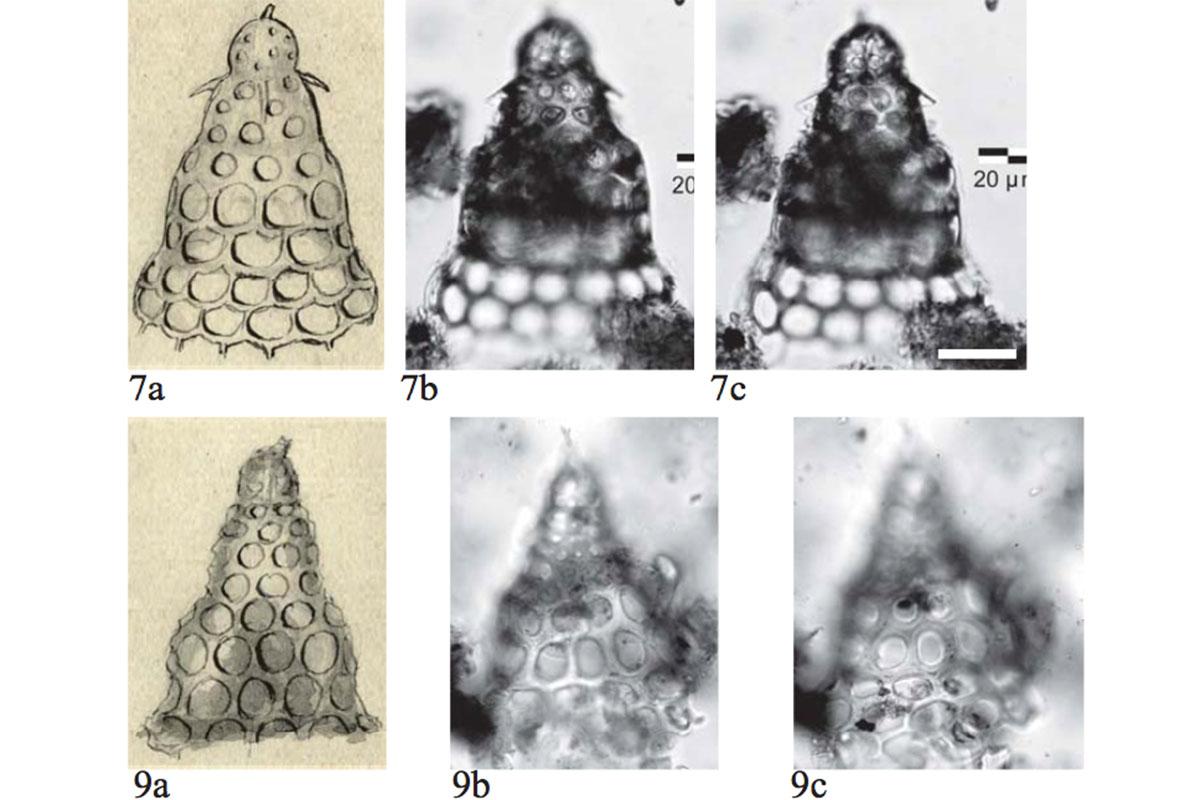 The micropaleontology collections of the MfN consist of three main subcollections:

The Deep-Sea collection – consisting of:

The Ehrenberg collection – several thousand each of samples, mica preparations, drawings of numerous different groups of fossil and living micro-organisms, collected from around the world.

In addition, there are smaller collections of other materials, including:

The Keupp collection – dinoflagellates, mostly calcareous, from a variety of locations including some deep-sea material.

The MfN holds one of the world's largest marine siliceous microfossil collections, with well over 100,000 curation units, and well over 2,000 holotype specimens. The primary use of the collections is in basic research, although they are also used for exhibition purposes, particularly the Ehrenberg and Radiolarian MRC materials. A large fraction of the contents e.g. the Lamont collection have been acquired only recently and have yet to be fully curated or databased.

The Lamont collection was acquired in June, 2021. It consists of ca 40,000 radiolarian and 30,000 diatom slides prepared between the 1960s and ca 2000 by many scientists and technicians at the Lamont Earth Observatory of Columbia University. The work was done under the leadership of James D. Hays (radiolarians) and Lloyd Burckle (diatoms). The coverage is global, but with a focus on the late Neogene to Quaternary, and includes many slides made from surface sediments and piston cores, in addition to some made from deep-sea drilling samples. Many of these slides were used in the seminal CLIMAP studies of Quaternary climate change (Hays and J. Imbrie, co-founders) which demonstrated the validity of the Milankovitch orbital variations theory of the earth's ice ages. This finding in turned laid the foundation for high resolution age dating of sedimentary sections, a fundamental part of modern paleoceanography and climate change research. The slides are currently documented by a card index library that accompanied the collection when acquired.

The Lazarus collection, primarily of Cenozoic radiolarians with some diatom slides, was started ca 30 years ago and is mostly from samples taken by the global deep-sea drilling programs (DSDP, ODP, IODP).   It contains a moderate amount of type material, but is primarily used for applied research in taxonomy, biostratigraphy, paleoceanography and evolution. It includes, in addition to materials prepard by David Lazarus and coworkers, some slides and samples from other radiolarian workers such as P. H. Chen. The majority of the material comes from Southern Ocean sediments.

The MRC collection is part of a global network of similar collections for radiolarians and other important deep-sea microfossil groups.  The MfN currently heads this network and manages the main MRC collection database.  More information about the MRC project can be found here.  The current IODP phase of the deep-sea drilling program home page is here.

The Mohr collection was donated by Barbara Mohr and consists of ca 2,000 slides of deep-sea sediment prepared for palynology examinations. These contain marine dinoflagellates, and also offshore transported terrestrial pollen and spores.

The Frydas collection was donated to the MfN by Dimitris Frydas in June, 2021. It contains ca 1,000 microscope slides and samples from marine microfossils. While some come from deep-sea sediments, most were obtained from pelagic or hemipelagic sediments exposed on land, with the collection focus on Greece. The large majority of the material is Neogene in age.

The Ehrenberg collection is the oldest major micropaleontology collection in the world, with material dating back to the beginning of the 19th Century.  It was created by Christian Gottfried Ehrenberg (1795 - 1876), one of the most famous and productive scientists of his day. He first scientist to systematically study living and fossil microscopic, mostly single-celled organisms.  It contains type specimens for over 2,000 species and hundreds of genera, including many of the most common species and genera in important groups of organisms such as diatoms. Most research with the Ehrenberg collection is re-description of type materials and fixation of names.  It is the only collection in the MfN to hold significant amounts of material collected by Charles Darwin, and includes material from his voyage on the Beagle.

Ehrenberg was born in Delitzsch, near Leipzig, he studied natural sciences in Berlin, and became a friend of the famous scientist and explorer, Alexander von Humboldt. At Humboldt's recommendation, Ehrenberg traveled on a multiyear scientific expedition to themid-east, where he collected thousands of specimens of plants and animals, many of which are still stored in the MfN inthe Institute for Zoology. After returning from this expedition, Ehrenberg began to concentrate his studies on microscopic organisms, which untilthen had not been systematically studied by science.

In a period of nearly 30 years Ehrenberg examined samples of water, soil, sediment, rock - virtually whatever material might contain living or fossil microscopic organisms - and described thousands of new species, and hundreds of new genera, for science in nearly 400 scientific publications. Most of his publications appeared in the Monatsbericht and Abhandlungen of the Prussian Academy of Sciences, and can be read online. As the result of this enormous work, Ehrenberg laid the foundation stone for today's field of Micropaleontology. Most of Ehrenberg's studies were of a unicellular group of protists called diatoms, although he also studied, and named, many species of other protists, particularly radiolarians as well. Ehrenberg was in his day world famous (at least among other scientists) and was often sent materials from around the world for his opinion.

The Collection is thus of global scope, and includes material from all continents. Collectors range from famous scientists like Darwin to amateur naturalists such as Assistant Surgeon J.C. Madison, who provided 12 samples from Fort Washita, Cherokee Nation (now Oklahoma). On Ehrenberg's death in 1876, his collections of microscopic organisms were deposited in the Museum für Naturkunde. The Ehrenberg Collection consists of several parts, including approximately 8,000 microscope preparations, 5,000 raw samples, 3,000 pencil and ink drawings , nearly 1,000 letters of correspondence, as well as index books and other documentation. Because of the Collection's great age and taxonomic importance, it was been extensively re-curated in the 2000's, in part with the support of the German government`s ministry of Education and Research (BMBF).

Information about the Collection is accessible both via the online Ehrenberg Collection Database, and by an ftp site where users can download original drawings, his daughter Clara`s handwritten collection catalogs and copies of his two great monographs: Infusionsthierchen (1838) and Mikrogeologie (1854).

Results of taxonomic research on the Collection are widely published in the literature.

The Paleozoic part of the Ostracode collection includes some type material and in part dates back well into the 19th Century.  The mostly Pleistocene-Holocene part of the Ostracode collection also has a few types. It was created during the DDR period, primarily for regional geologic survey purposes. The Foraminifera collection consists of mostly older material from Germany collected in the 19th and early 20th Centuries, and has a few types.  Locality and other metata for these collections are sparse and they have seen only rare use in the last decades. The Keupp collection was acquired fairly recently and has not yet been fully inventoried.