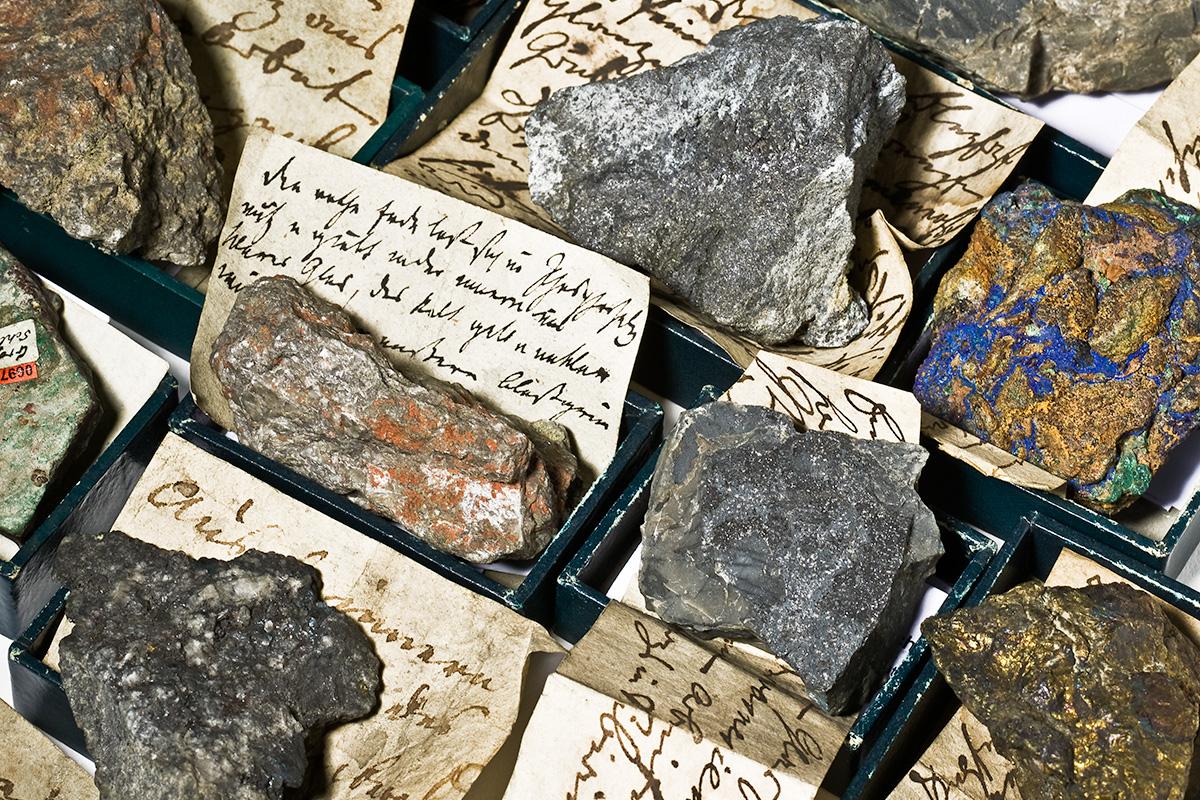 The Mineral Collection comprises approximately 180,000 samples of about 3,000  mineral species, which is approximately 60 % of all known minerals. It is the largest and most diverse mineral collection in Germany and therefore comparable in significance to collections of other major natural history museums in Europe.

The collection has a long and colourful history. The regional focus of the collection specimens lies in Germany, Poland, the territory of the former Austro-Hungarian monarchy, and Russia.

A selection comprising approximately 4,300 samples of 1077 different mineral species is accessible in the Mineral Hall of the public exhibition. In addition, there are collections of crystal models, technical products and archive material relating to them. The collection also contains a number of scientifically valuable type specimens.

The minerals are systematically organised following the Strunz crystal chemical classification. Within the same mineral group, samples have been sorted according to region of origin. All specimens are stored in systematic order, irrespective of their previous ownership. Around 90% of the specimens have been recorded in a database, including the classification, location, year of discovery, previous ownership, year and circumstances of acquisition, notes regarding the labels and special crystallographic characteristics.

Within the context of the SYNTHESIS project, the Museum für Naturkunde Berlin developed the GeoCase portal for data from European geoscience collections, where all specimens included can be searched online. Several thousand digital images of collection specimens and historic labels can be found on the Europeana portal.

The establishment of the Mineral Collection is a direct result of the foundation of the "Berliner Bergakademie" (Berlin mining academy) by Friedrich II (1712-1786), King of Prussia, in 1770. In 1781, the collection of Carl A. Gerhard (1738-1821), first Director of the Bergakademie, was purchased for teaching purposes. It was given the name „Königliches Mineralienkabinett“ (Royal minerals cabinet). The collection grew at a rapid rate, as generous donations were made by the Russian Czar Alexander I (1777-1825), Alexander von Humboldt (1769-1859) and others in the early stages.

In 1810, the collection was handed over to the newly founded "Berliner Universität" and renamed "Mineralogisches Museum" (mineralogical museum). The rapid development of mineralogy as a field of research under Martin H. Klaproth (1743-1817), Christian S.Weiss (1780-1856) and Gustav Rose (1798-1873) made it desirable to expand the collection continuously by purchases and taking over collections. In 1889 Carl Rumpff (1839-1889) bequeathed the large mineral collection that once belonged to Archduke Stephan of Austria (1817-1867) to the Museum. In the same year, the Museum’s collections moved into their permanent home, the Mineral Collection was housed in the left part of the front building and is still to be found there, more than a 100 years later.

During the Second World War, the Mineral Collection was hit by a bomb that caused damage. The complete evacuated public mineral exhibition was lost. Nevertheless, the mineralogical exhibition hall reopened in 1954 and never fails to amaze visitors. Over the past decades, numerous minerals were purchased from mining areas in the Erzgebirge, the Vogtland, the Thuringian Forest and the Mansfeld mining area.

Chemist and pharmacist Martin H. Klaproth (1743-1817) had a pharmacy in what is now the Nikolaiviertel in Berlin, where he analysed minerals with a precision that was unheard of in his day, discovering chemical elements such as zirconium, uranium, strontium, titanium, chromium and cerium. The piece shown here is one of the original samples that led to the discovery of uranium in 1789. Klaproth was also able to prove that green torbernite and yellow uranopilite are uranium compounds. The piece still bears its original label that says in Klaproth’s handwriting: “Grüner Uranglimmer, mit Pechuran, auf Uranocker, Georg Wagsfort zu Joh: Georgenstadt.” (green uranium mica, with pitch uranium, on uranium ochre, Georg Wagsfort at Joh: Georgenstadt). Klaproth’s collection was of such significance that the Berliner Universität purchased it after his death.

During his lifetime, Alexander von Humboldt (1769-1859) was an eminent donor of mineral and rock samples for the Königliches Mineralienkabinett (royal minerals cabinet) and later for the Mineral Collection of the Berliner Universität. He collected this piece on his South America expedition (1799-1804) and handed it over to the Königliches Mineralienkabinett in 1805. It still bears the original label by Humboldt in French: “Mexique. Filons de Calcedonie et d'Hyalite (Verre de Mueller) dans le Pechstein Porphyre de la Montagne de la Guadeloupe près du Mexique à 1240 t.“ [Mexico. Veins of chalcedony and hyalithe (Mueller’s glass) in the pitchstone porphyry of Mount Guadeloupe near Mexico City at a height of 1240 toises (=2420 metres)].

Perovskite crystal with an edge length of 7 mm

This piece was handed over by Chief Mines Inspector Kämmerer from Saint Petersburg to Gustav Rose (1798-1873) in Berlin in the summer of 1839 for further investigation. It was a heretofore unknown mineral, and Rose determined its physical properties and chemical composition. On Kämmerer’s suggestion, he named it after the Russian politician and mineralogist Count Lev Aleksevich Perovski and published the results in Poggendorffs Annalen der Physik und Chemie volume XXXXVIII in 1839. Thus, this piece is the holotype for the mineral perovskite. Type samples of minerals are generally very valuable in terms of science and the history of science because the number of known minerals is relatively low – approximately 5,000.

The collection is available for scientific research upon request. Please contact curator Dr. Ralf T. Schmitt. The material can be studied in the minerals repository, using macroscopic methods or stereo microscopes. A temporary workplace is available. For further studies, arrangements can be made to use the laboratories in the Global Catastrophes Department.