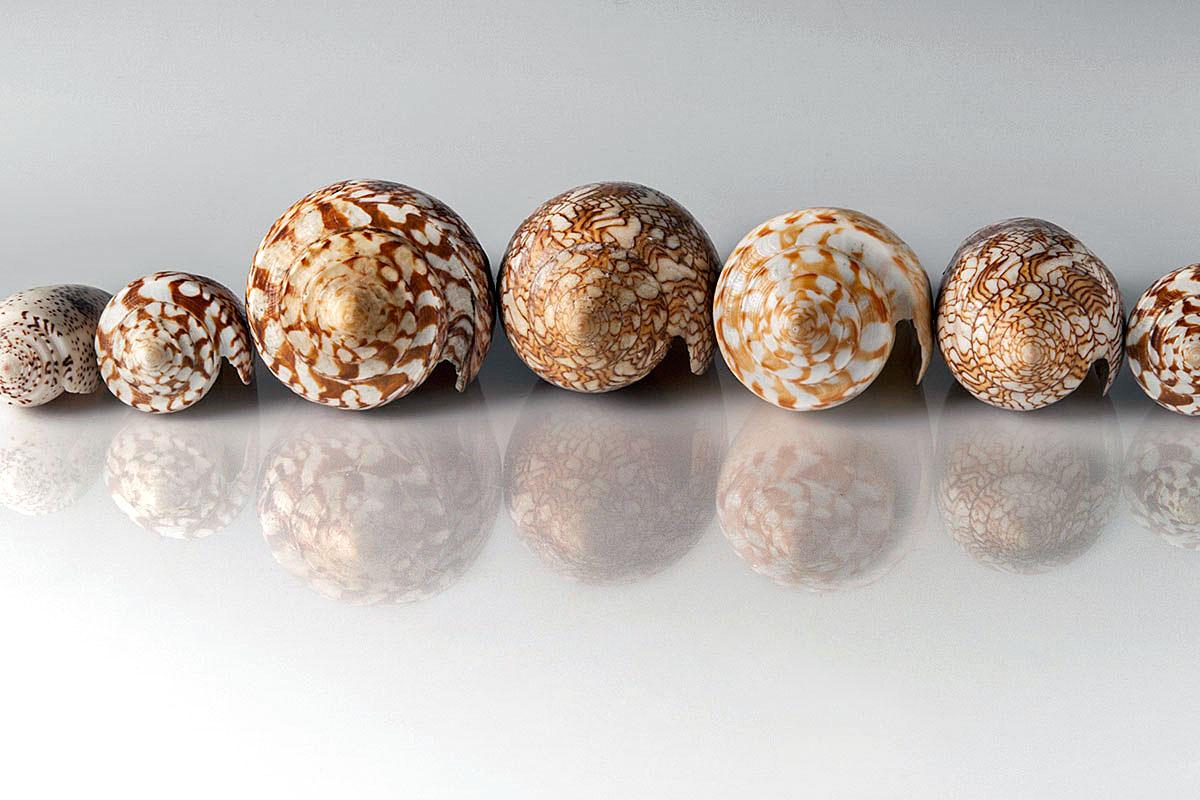 The Mollusc Collection comprises around 7 million specimens, which makes it one of the largest collections in the Museum für Naturkunde. It consists of substantial dry and ethanol collections with overall 260,000 collection units (jars/boxes) covering all mollusc groups. It includes historically valuable material and 9,125 type specimens. In addition, there are specialist collections, such as the collection of approximately 18,000 microscope slides or the collection of molluscs being used in artefacts.

With over 100,000 species, molluscs are the second most diverse phylum after the arthropods. Their origin can be traced back to the Cambrian 550 million years ago. This is where the fossil record of hard shells began, first just simple cone shapes, later more complex, spiral-type shells. Today, molluscs live in the sea, in freshwater and on land. It is estimated that of all the mollusc species described throughout the world, about half is represented in the collection of the Museum für Naturkunde Berlin. The phylum includes not only the well-known snails and slugs (Gastropoda), mussels and clams (Bivalvia) and squid/octopus (Cephalopoda), but also four lesser known groups that are less rich in species – the worm-like Aplacophorans, cap-like shells (Monoplacophora), chitons (Polyplacophora) and tusk shells (Scaphopoda).

About 56% of the 260,000 specimens in the collection have been digitally recorded. Alongside historical catalogue entries and Excel lists for internal use, an Access database has been used since 2014, where only the samples are recorded. It contains currently (October 2016) more than 19,000 items and will eventually be made available online. The substantial type collection can be searched at http://www.biologie.uni-ulm.de/systax/daten/index.html.

The collection mainly owes its existence to Karl Eduard von Martens (1831-1904), who systematically built and expanded it from the 1850s until his death in 1904.

By the end of the 1930s, the accession catalogue had 100,000 entries. Since then, the number of catalogued specimens has been steadily increasing through the work and research of curators. From the onset, bequests from important collectors such as Wilhelm Dunker (1809-1885), Friedrich Paetel (1812-1888), F. Arnold, H. Kolasius, C.A.E. Krausp, H. Rolle, F.A. Schilder, H.A. Schmidt, Friedrich Dahl and Karl August Möbius became valuable additions to the collection, while other important parts of the collection came from major expeditions such as the German Valdivia Deep Sea Expedition (1898-1899) and the German South Polar Expedition (1899-1901).

Byssus are horny, very tensile filaments, which are liquidly secreted from a foot gland mussels and quickly harden in the water. The byssus of Pinna nobilis consists of slightly striped, twisted golden brown threads of 30 to 60 mm length and up to 160 μm thickness. The species’ byssus was spun with silk to fine fabrics and manufactured on gloves, stockings or collars, mainly in South Italy. In Taranto, Palermo, Naples, Reggio near Messina or Cagliari, byssus spinning mills were in operation until the 19th century. The gloves of byssus silk were donated by the Bishop of Tarent to the Prussian king in 1822 and are a nowadays a part of the malacological collection of the Museum für Naturkunde. 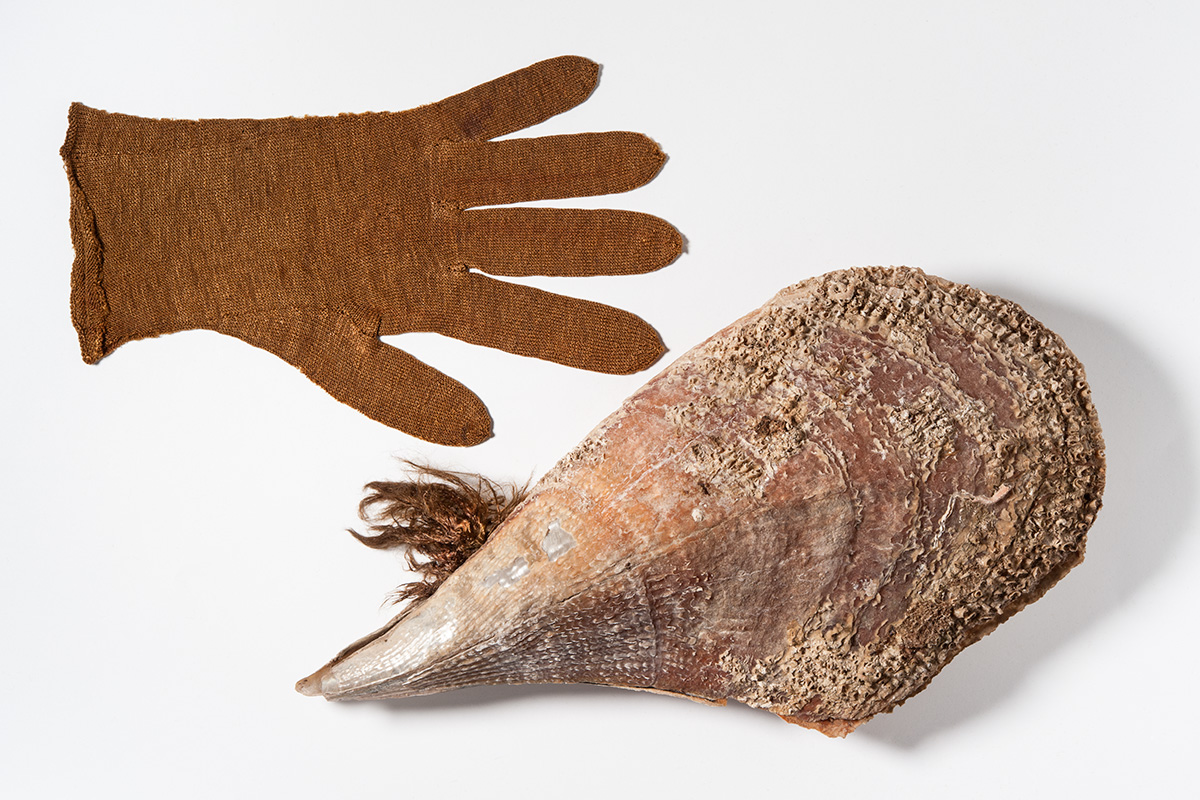 The vampire squid was discovered during the first German deep-sea expedition (1898-1899) with the ship Valdivia by Carl Chun and later became a part of the malacological collection at the Museum für Naturkunde in Berlin. Vampire squids are representatives of the Vampiromorpha, a transitional form between ten- and eight-armed cuttlefish. Characteristic are their hides between the arms, which can be stretched and remind of the cloak of a vampire. Their habitat is the deep sea.

The Mollusc Collection at the Museum für Naturkunde has one of the oldest large ethanol collection of molluscs. It has been used for anatomical studies for over 150 years, but only recently has it been possible to use new methods to analyse genetic material (DNA) in historical samples from the preserved mollusc bodies. Such molecular genetic methods make material from rare or even extinct species available to research in evolutionary biology or taxonomy. A new DNA and tissue collection has now been collated, currently comprising over 15,000 samples.

Since 1997, research has been focusing on freshwater molluscs in South East Asia. Projects looking at this geographical area resulted in several Diploma and Master’s dissertations as well as doctoral theses.

The comprehensive specialist library of the Mollusc Collection contains approximately 1,500 books, 30 journals and 10,500 reprints. The many historical works in malacology, the science of molluscs, make the library very valuable indeed.