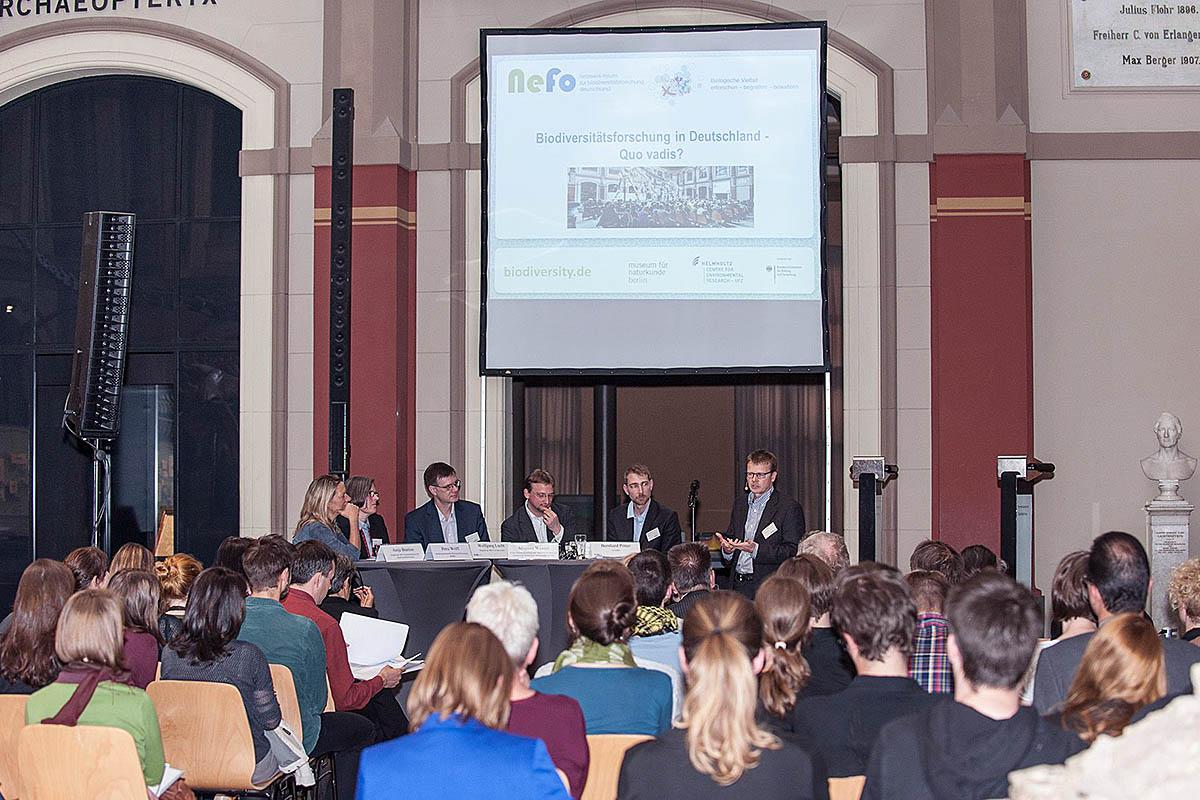 After 10 years the project funding of the Network Forum for Biodiversity Research (NeFo) by the Federal Ministry of Education and Research (BMBF) ended in August 2019.

With the end of the project funding, the first step is now to look back, take stock and set new priorities. In this way, the Helmholtz Centre for Environmental Research (UFZ) and the Museum für Naturkunde Berlin (MfN) together with their cooperation partner Leibniz Research Network on Biodiversity (LVB) would like to continue some of the proven NeFo activities, albeit with reduced capacities. For example, the NeFo website will continue to be available and the NeFo newsletter will remain for the time being.

Please feel free to stay in touch with us; we look forward to your suggestions.

In the summer of 2009, the "Network Forum Biodiversity Research" (NeFo) was launched by DIVERSITAS Germany - an association of key players in German biodiversity research that aimed to advance the implementation of the goals of the CBD through scientific expertise. Since then, NeFo has promoted the exchange between the various disciplines in German biodiversity research and actively stimulated debates on current issues of international and national nature conservation and sustainability policy. In this way, NeFo actively contributed to increasing the visibility of biodiversity research in the public arena and raising awareness of the social importance of biological diversity as a whole.

In addition to networking biodiversity research in Germany, NeFo was also involved at the interface between science and politics. Here the focus was on analysing and promoting the involvement of scientists and stakeholders in the work of the World Biodiversity Council Intergovernmental Platform for Biodiversity and Ecosystem Services (IPBES).

A lot has happened in the past 10 years: Large parts of the "UN Decade of Biodiversity" have passed, in 2010 the Aichi goals were adopted and currently the CBD process "Post-2020" is underway to update these goals. In 2012 the World Biodiversity Council IPBES was founded and in 2015 the 17 United Nations Sustainability Targets (SDGs) were adopted as part of Agenda 2030.

Numerous reports from national and international negotiations and exclusive interviews with actors* in the biodiversity scene enriched the current debates. Not only through such contributions, but also in about 50 NeFo workshops with about 1500 individual participants, intensive work was done on solutions for the conservation of biodiversity. The NeFo website has grown over the years into a comprehensive information repository, which also offers daily news, events and much more. The NeFo newsletter has also contributed and continues to contribute to mapping and enriching the diversity of the commitment to biodiversity. Furthermore, NeFo was intensively involved in the founding of the World Biodiversity Council IPBES. Over the years, NeFo has thus become both a sustainable network and a forum that promotes exchange across the boundaries of scientific disciplines and institutions, as well as beyond research.

Klick here to get to the official NeFo Website.