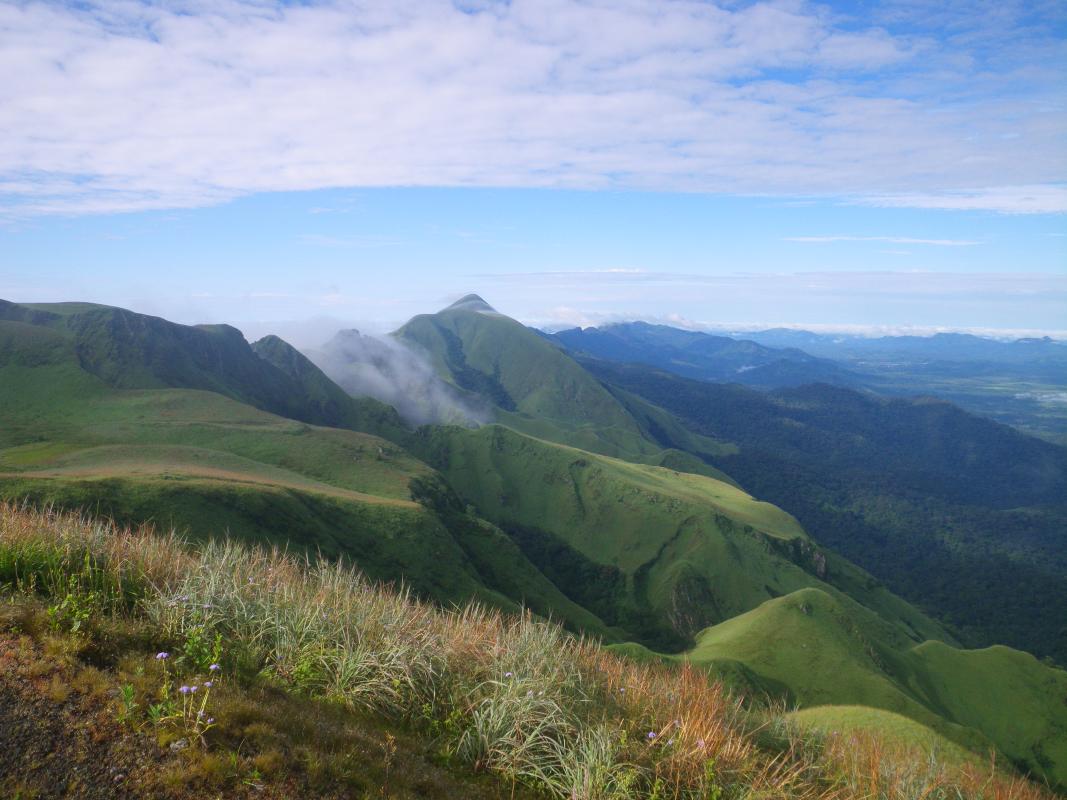 The main goal of this project is to give the scientific basis for a potent management plan, protecting this very high biodiversity. This goal we want to achieve in monitoring the herpetofauna, in determining key environmental parameters necessary for the persistence of this exceptionally high herpetodiversity and to develop scientifically based recommendations for its effective conservation. The research focuses on the one hand on the viviparous Nimba toad (Nimbaphrynoides occidentalis) and on the other hand on the riparian forest amphibian assemblages. The Nimba toad is (eu-) viviparous, occurs exclusively in the high altitude grasslands of the Nimba Mountains, and their life- and reproductive cycle is tightly linked to the mountains’ seasonality. The riparian forest assemblages are very divers and contain threatened species, of which most are assumed to be very sensitive to environmental changes. By determining the key determinants of the current herpetofauna we aim to help keeping these key parameters constant in the future and with this protect this exceptionally rich herpetofauna and possibly other animal and plant taxa with it.

The Nimba project started in 2007 at the University of Würzburg and since 2008 is based at the Museum für Naturkunde. It is financed by grand agreements with the Société de Mines de Fer Guinée (SMFG).

The viviparous Nimba toad (Nimbaphrynoides occidentalis) is a small and inconspicuous, toad endemic to the high altitude grasslands of the Nimba Mountains. It’s very restricted (< 4km²) and patchy distribution; enforced by the fact that the Nimba Mountains are now considered to be a World Heritage in danger, lead to the declaration of the Nimba toad as critically endangered by the IUCN. The most exciting characteristic is nevertheless its viviparous reproduction. Mothers nourish their young during the gestation by oviductal secretions and give birth to fully developed juveniles after nine months. This makes the Nimba toad the only truly viviparous anuran (frogs and toads) on Earth!

The main goals of this Nimba toad project are to determine the key environmental variables for the toad’s distribution and temporal distribution changes, the toad’s abundances and the temporal variance in its abundance and the variables important for the toad’s population structure. Together these results should enable us to develop potent recommendations for the protection of this very special toad.

Laura Sandberger-Loua prepared her PhD thesis within this part of the Nimba Project.

To determine a species’ distribution, it’s taxonomy needs to be known. We rediscovered the Liberian Nimba toad which was described as a separate species, examined its taxonomic status and consider it a sub-species of the Guinean/Ivorian Nimba toad.
Including Liberia the global distribution of Nimba toads is restricted to <4km² of high altitude grasslands above 1200 m asl, partitioned into three patches all separated by more than 5 km. Comparison with the past indicate that the toads distribution was slightly larger in 1950s than it is now. Using models (GLM, GAM, zero-inflated models) we identified the most important factors determining the elevation boundary (weather) and the patchy distribution (geology).

A populations’ structure is highly influenced by migrants successfully reproducing in the new population. With a population genetics study we examined the population differentiation and the permeability of the environment separating the three populations.
Another important factor is the number of reproducing individuals (effective population size) and the mating structure within a population. Therefore, we estimated the number of fathers siring Nimba toad litters. We found in combination with behavioural observations, that pre-mating female choice and male harassment are the main driver for moderately low numbers of multiply sired litters.

Forest amphibians are generally more sensitive to habitat alterations than savannah species, which are often distributed over wide areas within West Africa. Forest specialists may breed at ponds, rivers, tree holes or have a water independent reproduction. Riparian amphibians are often restricted to rivers with good water quality and/ or to particular characteristics (slow or fast flowing, rocky or muddy parts) of a river. Different species should show different sensitivities to different environmental characteristics and deviations from the optimum of this factor. Hence, amphibian assemblages should be determined in part by the environment and the quality of habitat. As in general forest amphibians and riparian amphibians are often more sensitive, habitat alterations should first be detectable within amphibian communities within forests along rivers. Therefore, we established a monitoring programme to examine the riparian amphibians within the forests around the Nimba Mountains. With this work we want to increase the knowledge on the connection between habitat parameters and particular species, as well as the amphibian assemblage occurring within a particular area. Additionally, we examine if and how habitat alterations (water quality, habitat quality etc) may show and after which delay from the environmental alterations within the amphibian communities.

This work is covered by the PhD thesis of Joseph Doumbia.

Publications containing data from this project