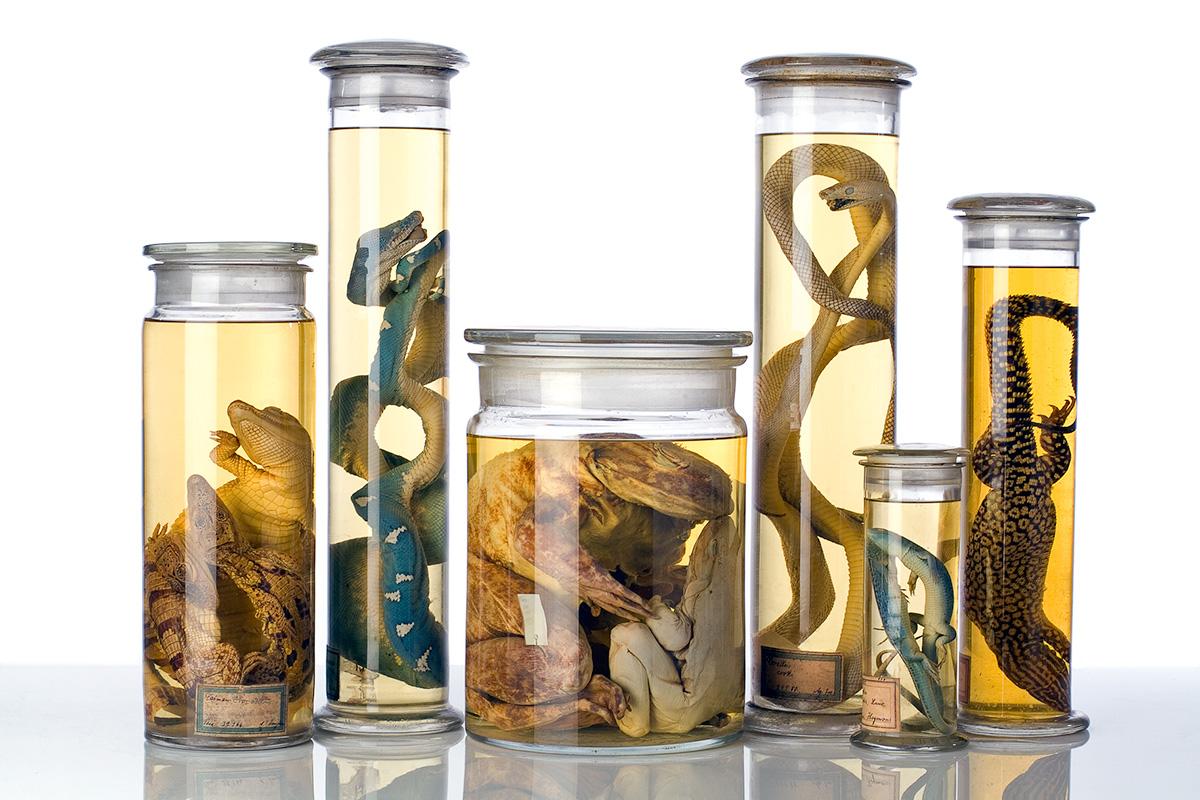 The Herpetological Collection comprises 160,000 amphibian and reptiles, of which the oldest specimens are 280 years old. It contains 1,400 shells, skeletons and dry specimens, approximately 155,000 ethanol preserved animals, as well as tissue samples and recordings of frog calls. It also contains approximately 5,000 photos of various specimens (mainly type specimens) and micro CT scans of over 1,000 species.

While the historical part of the collection (mid-18th century to before the Second World War) comprises species from all over the world, the current research focus is mainly on African amphibians.

In the course of the 19th and 20th centuries, many important parts of the collection were contributed by eminent collectors and explorers from all over the world. The current herpetology group, led by the curator Mark-Oliver Rödel, is conducting research in Africa, Madagascar and Europe.

The herpetological collection of the Museum für Naturkunde takes third place in Europe and is among the 10 foremost collections in the world. Its type specimens (approximately 2,600) referring to approx. 1,900 species descriptions make the collection one of the internationally most significant reference points for taxonomic and systematic research.

A unique feature of the MfN research museum is the linkage between the collection and data from the Historische Arbeitsstelle (Department of Historical Research), which allows making a connection between the history of the collected items and their collectors, and information form the collection. Finally, it is possible to make research about the collections' historical details.

One of the most spectacular new discoveries in the herpetological collection – sabre-toothed frogs:

The genetic relationships of tropical amphibian species has been very little researched. MfN scientists Michael Barej and Mark-Oliver Rödel wanted to elucidate the relationship of a group of frogs that have adapted to life in fast-flowing rivers and waterfalls in African rain forests. To their great surprise, the West African frogs proved to be not very closely related to the Central and East African species of similar morphology. Their discovery was the scientific equivalent of a lottery jackpot. The scientists were able to demonstrate that the West African torrent frogs must have separated from other frog groups as early as in the Cretaceous, i.e. in the days of the dinosaurs. The scientific name of the new frog family, Odontobatrachidae, points to an unexpected anatomic characteristic – backwards-pointing teeth in the upper and massive fangs in the lower Jaw. It is not quite clear yet what the frogs use their teeth for – possibly for hunting and eating other frogs.

This giant snake (Phyton sebae), its abdomen and stomach opened to reveal the head and beak of a bird, is a specimen originating from the most famous natural history collections of the 18th century – belonging to the Dutchman Albertus Seba (1665-1736). According to studies by Aaron Bauer from the Villanova University (USA) and Rainer Günther (curator emeritus MfN, Berlin), various amphibians and reptiles that were part of a collection donated to the Museum in 1817, could be identified as coming from Seba. In fact, 23 MfN specimens, belonging to 21 taxa, can be traced back to Seba’s second collection. Many of them have type status. This Rock Python, Python sebae, is now thought to be the oldest herpetological specimen in the MfN collection and dates back at least to 1734. This adds a new historical dimension to the Berlin collection, as it turns out to contain the largest number of herpetological specimens originating from Seba. The discovery of the material also opens up opportunities for further exploration not only of the taxonomy of species whose types have been rediscovered, but also of the history of the Museum’s collections from the 18th and early 19th centuries. 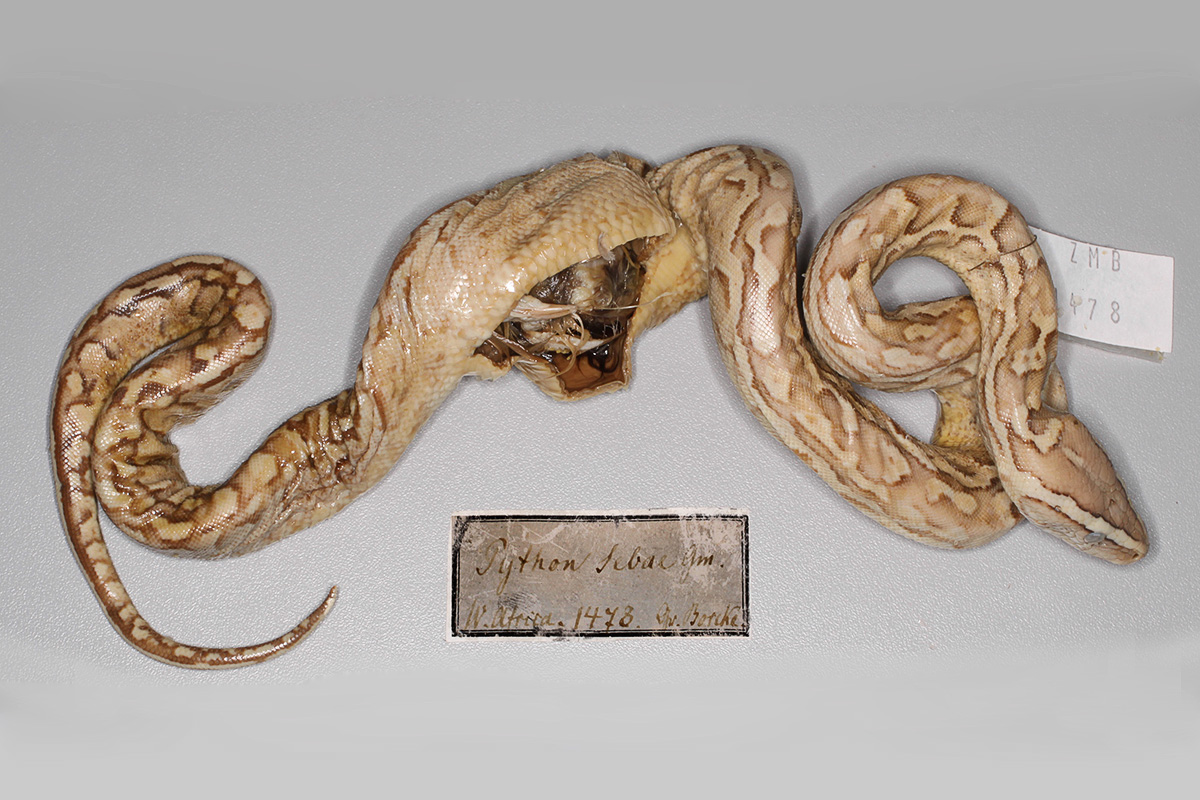 Research in the MfN herpetological collection focuses on the taxonomy and phylogeny of recent amphibians and reptiles, but it has a far wider reemit. Thus, we are currently establishing new methods that will allow the use of the collection to study the effects of environmental changes on species. One of our current hot topics relates to changes in the characteristics of native frogs in an urban environment. The collection is frequently used by visiting zoologists and palaeontologists not only to research taxonomic questions, but also to elucidate the evolution of morphological and anatomical characteristics or seek answers to biogeographic questions.

Here you can find further information on the curator's Nimba Project.

The collection data are in the process of being digitised. Some taxonomic groups have already been completely digitised and can be accessed via the curator and the collection manager.