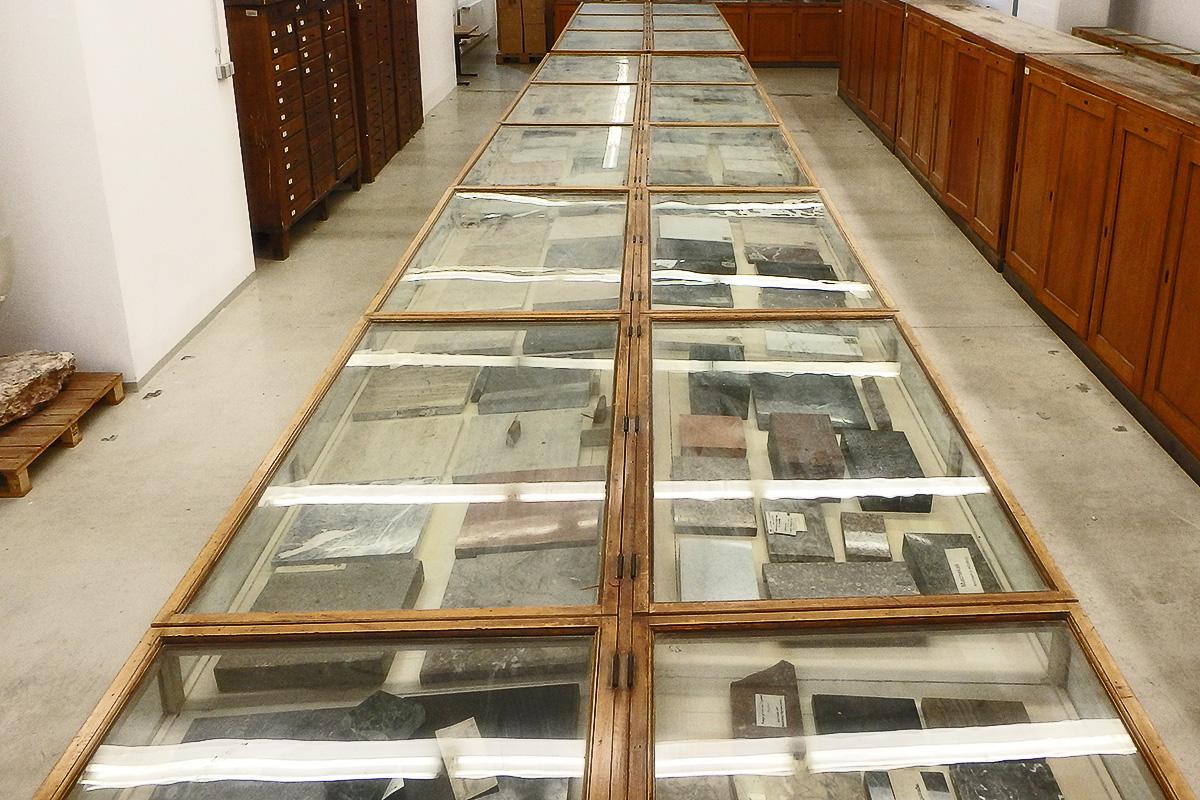 The Rock and Ore Collection comprises approximately 70,000 rock and ore samples and is subdivided into Regional Rock, Systematic Rock, Impactite, Crystalline Erratic Rock, Ore, and Natural Building Stone sub-collections. There are also thin sections and polished thick sections of rocks and minerals attached to the collection. The comprehensive Impactite collection comprising 5,000 impact crater rock specimens is unique in Europe and one of the largest in the world.

About half of our specimens have been recorded in our database, and work is ongoing. The subcollections Systematic Petrography and Impact Crater Rocks have been completely digitised.

Within the context of the SYNTHESYS project, the Museum für Naturkunde Berlin developed the GeoCase research portal, which gives access to data of specimens from European geoscientific collections that have been digitised. Historic labels from the Petrography and Economic Geology Collection can be viewed on the Europeana portal.

The history of the collection is inextricably linked to that of the Mineral Collection. The oldest specimens originate from scientific voyages and expeditions of the late 18th and 19th centuries and are part of the Regional rock collection. These are in particular igneous and metamorphic rocks from Germany, Poland, Italy and Scandinavia. There are also original samples from the Russia expedition undertaken in 1829 by Alexander von Humboldt, Gustav Rose and Christian G. Ehrenberg, and from the geological exploration of South America by Friedrich Sellow (1882), Ignaz von Olfers (1882) or Ludwig Brackebusch (1884), which represent important historical connections.

The Systematic Rock Collection was originally compiled for teaching purposes and contains specimens of the most important igneous and metamorphic rocks. The Crystalline Erratic Rock collection was taken over from the Preußische Geologische Landesanstalt/Reichsamt für Bodenforschung shortly after the Second World War. It also includes specimens that once belonged to the pioneer of drift material research, Julius Hesemann (1901-1980).

The Ore collection was compiled by the pioneer in ore microscopy, Paul Ramdohr (1890-1985), including samples from the Mineral Collection, his own samples and gifts from mining companies. It includes ore minerals, ore samples and associated rock samples from many classical ore mining sites all over the world.

The Impactite Collection contains rocks from impact craters all over the world and is the latest highlight of the Rock and Ore Collection. It holds samples from 73 of the 188 known impact craters on Earth, focusing on regions such as the Nördlinger Ries in Southern Germany and the Araguainha crater in Brazil.

Suevite is a typical impactite that forms when a cosmic projectile hits the Earth. It contains mineral and rock fragments from the crater target at various degrees of shock metamorphism as well as fragments of impact melt. The components of suevite can provide evidence of shock metamorphism and high pressure phase transformations, both of which are crucial for the unambiguous identification of impact craters. The suevite shown here originates from the Nördlinger Ries, an approximately 14.6 million-year-old impact crater in southern Germany with a diameter of approximately 22 km. This piece was collected as part of research work by the University of Münster. When Dieter Stöffler began to work at Museum für Naturkunde in 1993, the suevite moved to Berlin together with 600 other impact crater rocks, forming the founding stock of the Impactite Collection that was established at that time. 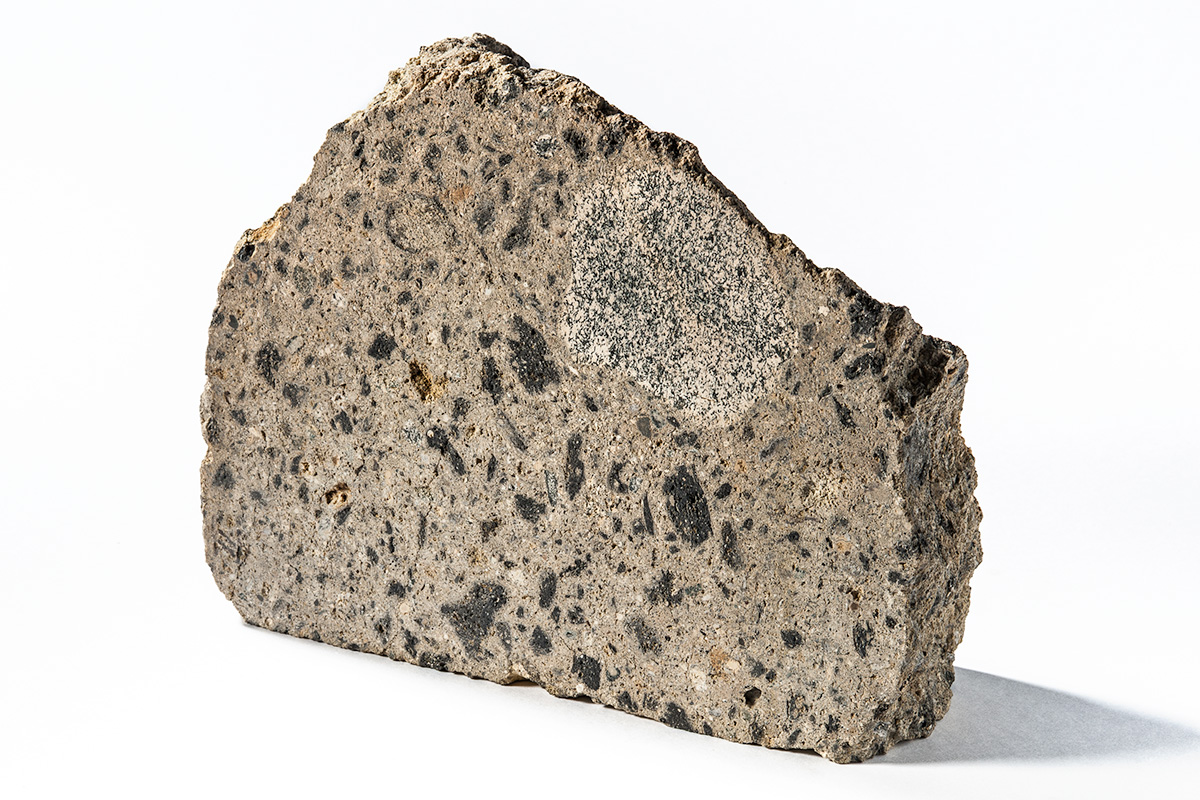 Carl von Oeynhausen (1795-1865) and Heinrich von Dechen (1800-1889) travelled in Britain from September 1826 to November 1827, on behalf of the Oberberghauptmannschaft (mining authority) in Berlin, with the purpose of gathering information on coal mining and the transport system. On this journey, they also carried out geoscientific studies, collecting minerals, rocks and fossils. Both climbed Ben Nevis in Scotland on July 4th 1827 for geological studies and collected the gneiss sample shown here. The specimen reached Berlin’s University together with approximately 4,000 other samples and was recorded in a hand-written collection catalogue. This piece of gneiss is now part of the Regional Rock Collection. 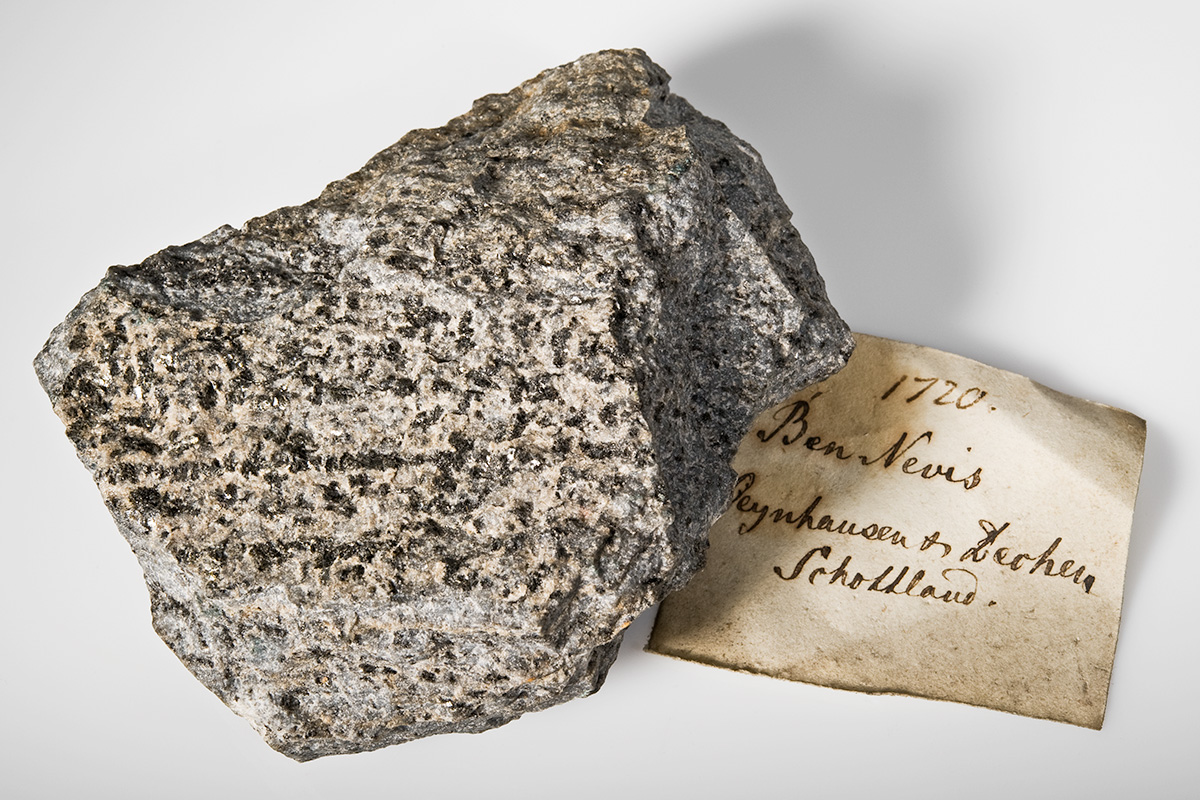 This piece is a metamorphic conglomerate with large quartz pebbles and a pyrite-bearing matrix. It originates from a fossil placer deposit dating back to the Archaean 2.9 billion years ago. This placer deposit in the Witwatersrand Basin in South Africa has considerable economic significance due to its gold and uranium deposits. Approximately 50% of all gold that has so far been mined comes from this site alone, which is also the largest gold reserve on Earth. This piece of metaconglomerate was given to the Museum für Naturkunde by Uwe Reimold in 2003 and is now part of the Ore Collection. 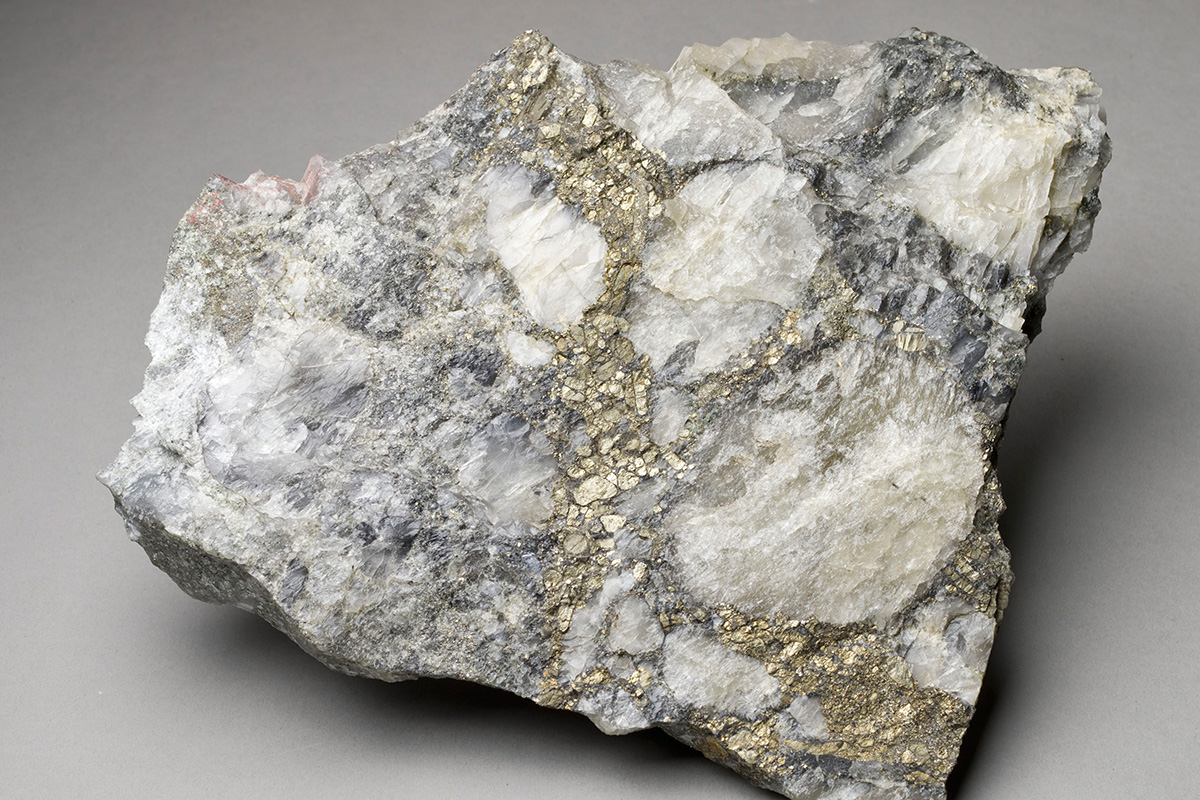 The Impactite Collection is closely connected to the Global Catastrophes Department in the Science Programme Evolution and Geoprocesses at the Museum, where impact events and their repercussions are studied. The collection is generally open to those interested in the research. The collection material can be studied macroscopally as well as using a stereo microscope. For further examinations of the material, the use of the laboratories in the Global Catastrophes department could be arranged. Please contact our curator Dr. Ralf-Thomas Schmitt.