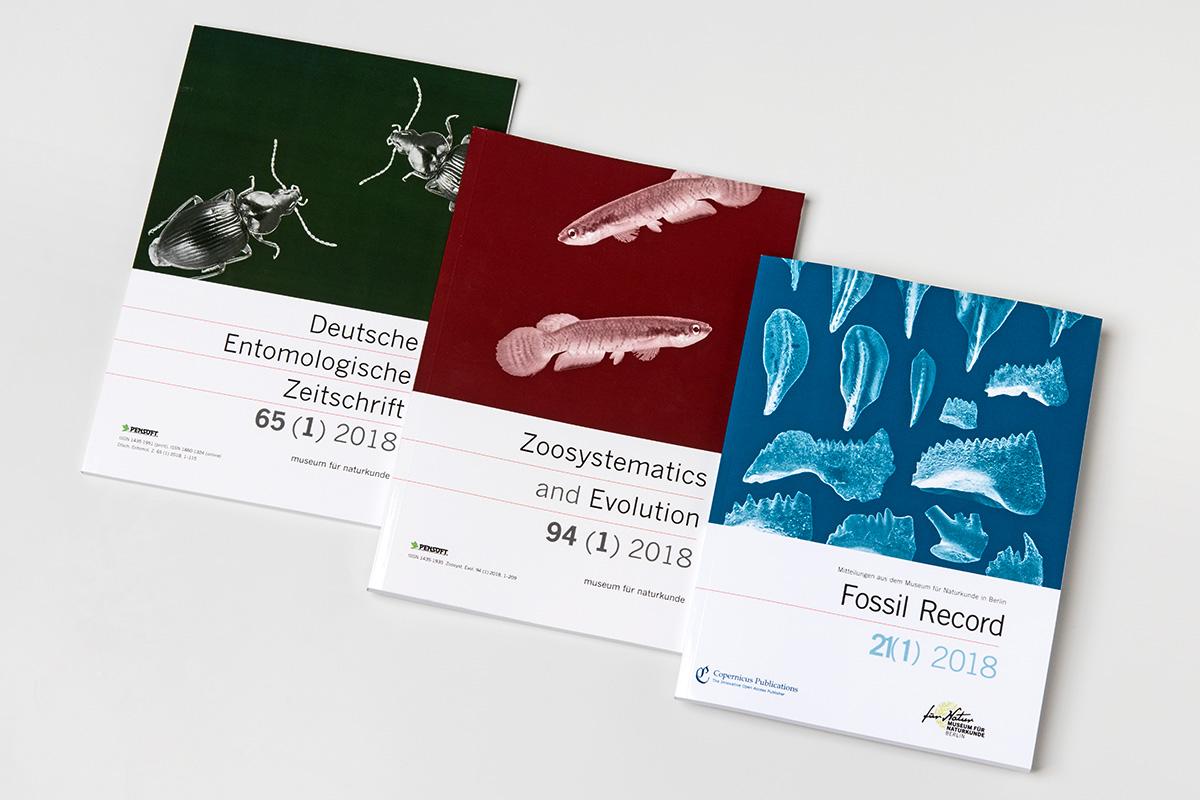 The Museum für Naturkunde publishes three scientific journals: Deutsche Entomologische Zeitschrift (DEZ), Zoosystematics and Evolution (ZSE, formerly Mitteilungen aus dem Zoologischen Museum Berlin) and Fossil Record (FR). Each journal is published with two issues per year. The Museum bears the editorial responsibility and is owner of the titles from the beginning of the foundations in 1857 (DEZ), 1898 (ZSE) and 1998 (FR).

All three journals are closely linked to the museum's main research topics and are therefore a far-reaching international publication platform for current research results in the fields of paleontology, entomology and the life sciences.

Since 2014, the three journals have been openly accessible and thus support the canon of free availability of knowledge and promote scientific exchange even more strongly. All three journals are published in English and offer print-on-demand. The publication costs (APC' s) are currently covered by the museum up to a certain limit.

Please submit your manuscripts online at the homepages of the journals.

Fossil Record is the ISI-listed palaeontological journal of the Museum für Naturkunde with an Impact Factor of 2.081 (2021). This journal was founded in 1998 under the name Mitteilungen aus dem Museum für Naturkunde in Berlin, Geowissenschaftliche Reihe and appears with two issues each year. Fossil Record seeks to appeal to an international audience. Large format, high quality illustrations and with an option for publishing monographs, this journal is open to all authors worldwide.

All manuscripts are subject to at least two peer-reviews.

Authors worldwide are invited to submit manuscripts. From 2014 to 2021, the Fossil Record was published as an open access journal by Copernicus Publications (Göttingen, Germany). Since 2022, the journal has been published by Pensoft.

Fossil Record publishes original papers in all areas of palaeontology including the taxonomy and systematics of fossil organisms, biostratigraphy, palaeoecology, and evolution. All taxonomic groups are treated, including invertebrates, microfossils, plants and vertebrates. Fossil Record emphasizes specimen-based research and welcomes contributions dealing with any palaeobiological processes and patterns. In addition to the regularly published issues, larger single topic contributions such as doctoral theses can be printed.

Founded in 1857 as Berliner Entomologische Zeitschrift, our journal Deutsche Entomologische Zeitschrift builds on a long tradition of disseminating knowledge on the systematics of insects. The first edition was published and edited by Ernst Gustav Kraatz. In the course of the first 150 years in the history of DEZ, more than 22,000 species, about 2 % of all known species of hexapods from all over the world have been described in the journal., thus contributing significantly to our knowledge of global biodiversity.

Deutsche Entomologische Zeitschrift is dedicated to providing a high-quality forum to contribute to the documentation of insect species, their distribution, their properties, and their phylogenetic relationships. All submitted manuscripts are subject to at least two external peer-reviews by leading specialists in the respective topic. Distinguished authorities form the international advisory board which guarantees the high scientific profile of the journal. At present, the DEZ has an impact factor of 0.778 (2021).

Since 2014 the DEZ is published Open Access with the publisher Pensoft.

Deutsche Entomologische Zeitschrift is an international journal of systematic entomology. It publishes original research papers in English on the systematics, taxonomy, phylogeny, comparative morphology, and biogeography of insects. Other arthropods are also considered where of relevance to the biology of insects. The geographical scope of the journal is worldwide. Priority is given to revisional work and comprehensive studies of phylogenetic, biological or zoogeographical relevance. We also invite review articles pertaining to the systematics and biology of insects.

In 1898, Karl August Möbius (1825–1908), then Director of the Zoological Collections, launched a journal called "Mitteilungen aus der Zoologischen Sammlung des Museums für Naturkunde in Berlin" (News from the Zoological Collection of the Museums für Naturkunde in Berlin). Möbius thus founded a journal closely connected to the collections of the Museum. The journal now looks back at more than a hundred years of history.

In early 2008, it was renamed "Zoosystematics and Evolution". This was to signal that the journal strengthens its emphasis on zoosystematic contributions and to those with a perspective in evolutionary biology. Since 2014 the ZSE is published Open Access with the publisher Pensoft and has an impact factor of 0.903 (2021).

We invite contributions by all authors interested in these subjects, including those not formally associated with the Berlin museum. All submitted manuscripts are subject to at least two peer-reviews.

Zoosystematics and Evolution is an international, life science journal, devoted to whole-organism biology. It mainly publishes original research and review articles in the field of taxonomy, biosystematics, evolution, morphology, development and biogeography of all Metazoa. Its scope encompasses primary information from collection-related research, viz. taxonomic descriptions and discoveries, revisions, annotated type catalogues, aspects of the history of science, and contributions on new methods and principles of systematics. Articles whose main topic is ecology, functional anatomy, physiology, or ethology are only accepted when of clear systematic or evolutionary relevance and perspective.