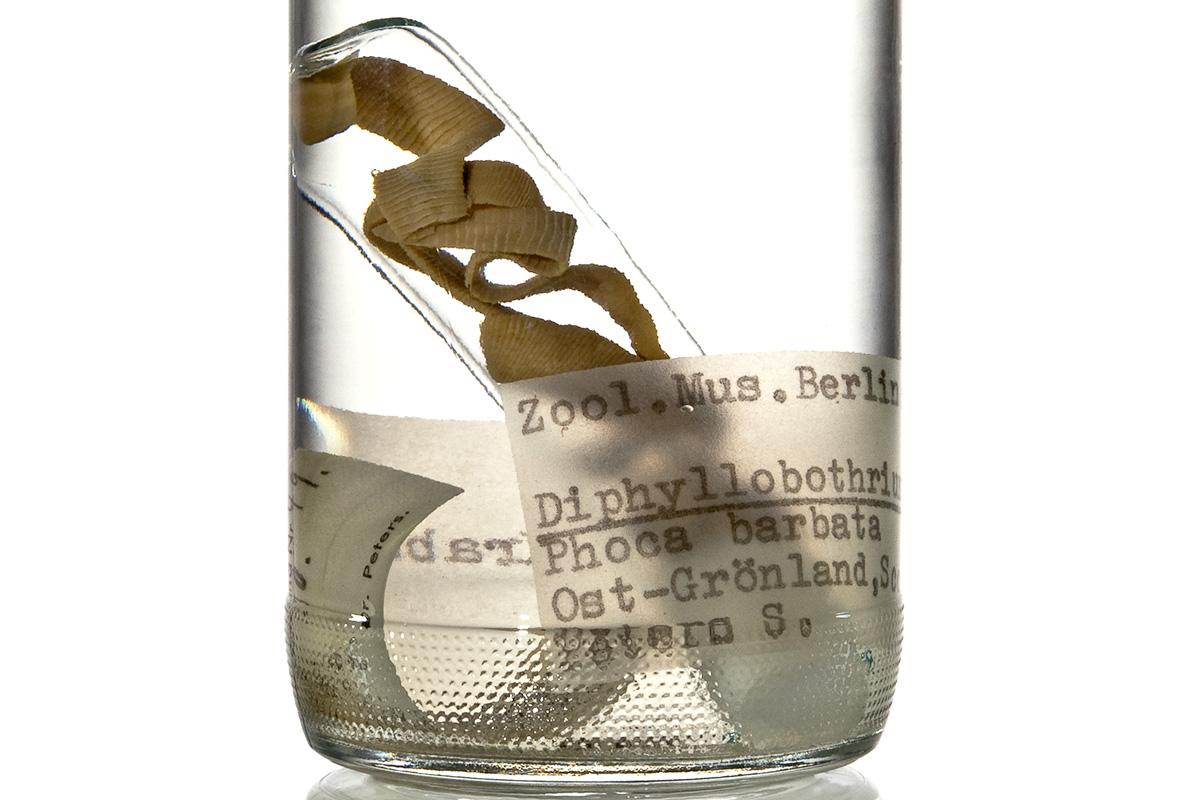 The collection of vermiforms comprises a mottled mixture of preserved vermiforms of various invertebrate groups and is not a unified collection in terms of systematics or taxonomy. The collection was named “Vermes” – worms, which is a biological/historical category comprising the following groups:

The collection holds in total approximately 100,000 specimens, of which 3,611 lots in the numbered catalogues represent type specimens for species. Approximately 14,000 are preserved in ethanol, about 16,000 are microscope slides and several hundred tubes contain dry specimens.

The Naturalienkabinett der Akademie der Wissenschaften (Natural History Collection of the Academy of Sciences) had early zoological collections since 1716. These were taken over by the Akademisches Museum in 1799 and in 1803 by the Anatomisches Kabinett (Anatomical Collection). When what is now the Humboldt-Universität was founded in 1810, the zoological collections were divided and assigned to the Anatomisch-Zootomisches Museum of the Medical School and the Zoologisches Museum of the School of Philosophy. The Anatomisch-Zootomisches Museum collected parasitic worms, skeletons of vertebrates and preparations of inner organs to better understand human physiology. The Zoologisches Museum, which had similar ideas, but failed to put them into practice, continued to collect insects, worms, fishes, amphibians, skins of vertebrates and voucher material of skeletons. This unhappy state of affairs only came to an end when the two collections were reunited in the current Museum building in 1889. Many specimens were collected during the 18th and 19th century or brought back from major marine expeditions such as the SMS Gazelle Expedition (1874), the German Deep Sea Expedition (1898-99) and the German South Polar Expedition (1901-1903).

The collection is used by the Curatorship and external scientists. The main focus is on taxonomy, often in the context of biodiversity research. The specimens and in particular the types are used for comparisons with extant material, for new descriptions and categorisations of species as well as the revision of species names. New research queries keep emerging that refer to specific specimens or sectors of the collection.

The wide range of different worm groups, represented by comprehensive type material, is unique in Berlin. Parasitic helminths, a heterogenous group of worms that was named by Carl Asmund Rudolphi, founding father of helminthology. The collection includes Rudolphi’s own historical preparations, and the bequest of collection and purchase documentation is stored at the Historische Arbeitsstätte. No other collection in Germany has such a rich contingent of parasites as can be found in the Berlin collection.

The Curatorship Library contains 19,000 reprints, monographs and books. Of some of the literature, only a few copies exist in Germany. These are in demand from scientists from other parts of Germany and abroad. The library is in constant use so that queries can be answered and research done.