Fossil Record one of the most cited palaeontological journals worldwide 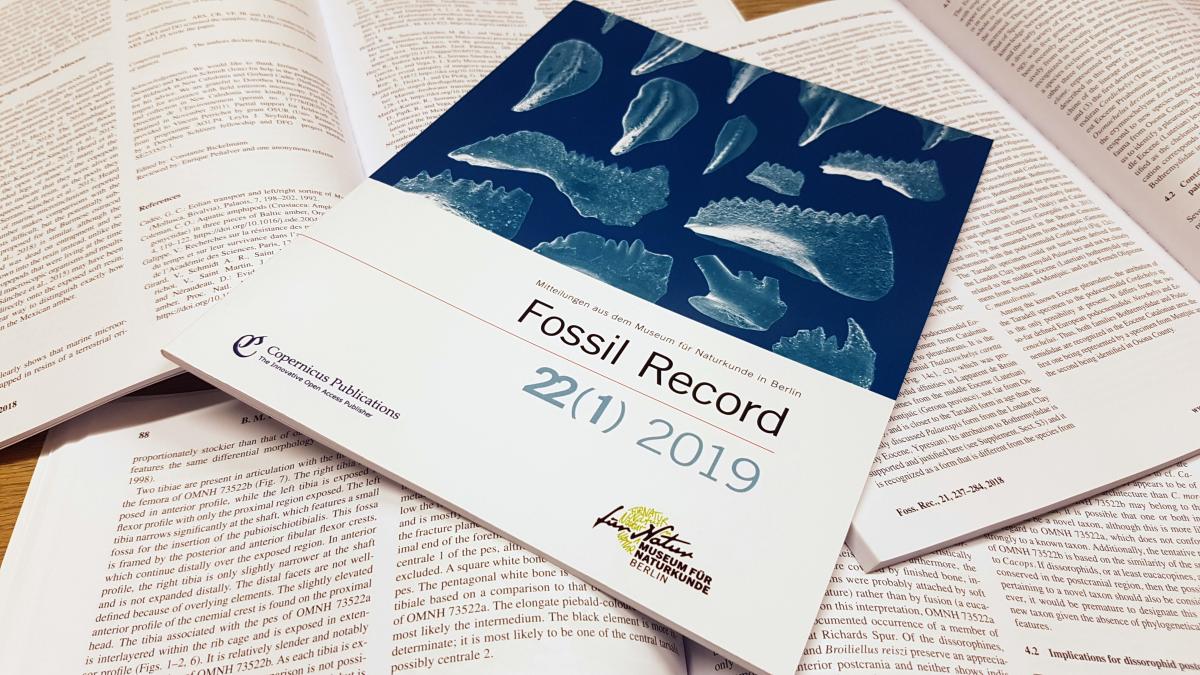 The Museum für Naturkunde Berlin publishes three scientific journals: Fossil Record, the German Entomological Journal, and Zoosystematics and Evolution. The museum bears editorial responsibility and is the publisher of the titles. An interview with Dr. Florian Witzmann, palaeontologist and one of the chief editors of Fossil Record:

Why does a natural history museum publish scientific journals?

FW: The Museum für Naturkunde Berlin is a globally active, integrated research museum. The results of research on the development of the earth and life are communicated to the public in a variety of ways, for example in the exhibition, at events and through publications in renowned scientific journals.

What is the profile of the journal Fossil Record?

FW: Fossil Record is a SCIE-listed palaeontological journal of the Museum für Naturkunde Berlin and publishes original papers from all areas of palaeontology, including taxonomy and systematics of fossil organisms, biostratigraphy, palaeoecology and evolution. All taxonomic groupscovered, including invertebrates, microfossils, plants and vertebrates. The journal is large-sized, contains high quality illustrations and offers the possibility to publish monographs. Since 2014, Fossil Record is an open access journal and is published by Copernicus Publications (Göttingen, Germany). The editors are an international team of scientists working in different palaeontological disciplines.

FW: Since 2009, the journal is SCIE-listed. SCIE stands for Science Citation Index Expanded (Web of Science Group), a world-leading index for measuring the impact of journal citations on the scientific community. The former editor of the Fossil Record, Dr. Dieter Korn, was in charge of the index. He introduced strict criteria, for example, that articles published only in English, that two volumes are published per year and that two international reviewers are appointed for each article. These were important steps in the improvement of the quality of our journal.

How long has the magazine been around and who is the target group?

FW: Fossil Record was founded in 1998 under the name Mitteilungen aus dem Museum für Naturkunde Berlin, Geowissenschaftliche Reihe, by the former director Prof. Hans-Peter Schultze and is published with two issues per year. It targets an international readership engaged in palaeontological research: students, postdocs, and scientists worldwide. Since the journal is Open Access, anyone with internet access anywhere in the world, from Zehlendorf to Zambia, can download all these articles and gets informed on current research. This is also a mission of the integrated, open research museum.

At the beginning of July 2020, you received the news that the SCIE-listed journal Fossil Record is in the "1st Quartile". What does this mean?

FW: There is a large number of palaeontological journals worldwide in which individual articles are published. Other contributions are cited in the articles. The more relevant an article is, the more it is cited. The more articles from Fossil Record are cited, the higher the resulting citation index will be. In 2016 the so-called Journal Impact Factor was 1,250, now it is 2,081, i.e. each article is cited twice a year on average. The journal is now one of the most frequently cited palaeontological journals worldwide.

The research museum can be very proud of this. How did you manage to be among the most recognized?

FW: Since 2014, the three journals of the Museum für Naturkunde Berlin have been freely accessible worldwide, supporting the canon of free availability of knowledge and thus promoting free scientific exchange (Open Access). The journals are published in English and offer print-on-demand. Manuscripts can be submitted directly online. Authors from all over the world are invited to do so and make intensive use of this service. Publication is comparatively fast, averaging 145 days from submission to publication. The costs are covered by the Museum für Naturkunde Berlin. I would like to thank the Directorate General for this support. I would also like to emphasize the great work of the Science Programme “Digital World and Information Science” whose publication management of our three MfN-journals and the promotion of Open Access at the MfN contributed significantly to the success of Fossil Record.

One more private question at the end: Do you have a highlight publication in Fossil Record?

FW: I like articles that are both collection-based and have analytical, evolutionary questions. In 2009 such an article about the individual development of fossil amphibians was published (DOI: 10.1002/mmng.200800012). One of the authors, Nadia Fröbisch, is now professor at the Museum für Naturkunde Berlin.

Interview by Dr. Gesine Steiner, Press officer of the Museum für Naturkunde Berlin. Further information on the journals can be found here.