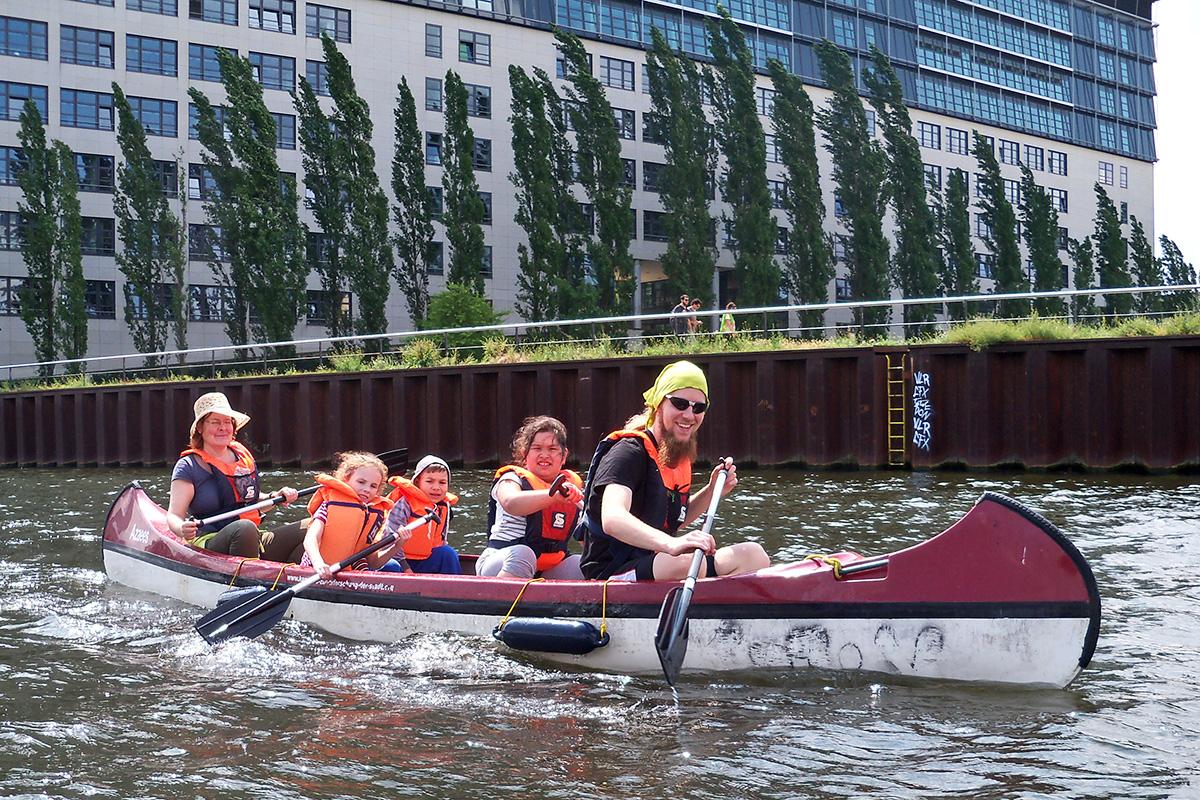 The Education Department at the Museum für Naturkunde closely collaborates with various partners, such as schools, child care centres, universities, adult education centres and artists. Here is an overview of some of our projects.

Cooperation projects with kindergartens and schools in the district Wedding

Since 2012, the Museum für Naturkunde and educational institutions as well as two neighbourhood organisations of the district Wedding in Berlin have formed an educational alliance with the common goal  to increase the educational opportunities for children and young people in this district. With funds from the funding programmes "MuseobilBox" of the Bundesverband Museumspädagogik e. V. and the funding programme "Kultur macht stark" of the BMBF (Federal Ministry for education and research), the museum was able to offer permanently two educational programmes for kindergarten and primary school children from 2013 - 2017.  In the Researchers Club pupils aged 11 and 12 met biweekly in the microscopy centre of the Museum. The museum project "Wild Animals in the city" was aimed at younger children in kindergarten age. Once a year the children present their projects in the form of self-designed science boxes.

This initiative helped to build a long-term cooperation between the Museum and Wedding’s educational institutions and to develop educational projects in child care centres and schools, involving the children themselves. The projects for kindergarten children is continued by a new funding of the Berlin Senate from 2018 to 2020.
A cooperation with the Kitaverbund Brunnenviertel, Gustav-Falke-Schule, Quartiersmanagement Brunnenviertel-Ackerstraße und Brunnenviertel-Brunnenstraße
Projektteam Museum: Lina Wischnewsky, Jessica Baltuttis, Melanie Krause („Tiere Berlins“), Astrid Faber, Mathias Zilch und Natalie Köppe (project director and coordinator)

A combined art and science project on the Peruvian stick insect
Many children, child care centres and schools are taking part in the ‘adopt a stick insect’ programme and are now proud owners of a terrarium with live stick insects. As adoptive parents of a stick insect, they explore the life and behaviour of these only recently discovered insects. They feed them privet leaves and watch how stick insect larvae hatch from tiny eggs. They communicate their experiences and observations in the SchreckenBlog, (stick insect blog), their communal online research blog. They are supported by Museum staff, who advise the children on how to keep and study such exotic insects. The open and participative approach of the project appeals to the children’s exploratory mind and creativity. They are involved in the continuous development of the project.
A project developed by Roter Fleck WISSEN SCHAFFT WISSEN – Initiative
Idea, concept, implementation and project coordination: Dr. Katinka Pantz

Partnership for the conservation of biodiversity
The Hagenbeck-Schule has been a partner school of Museum für Naturkunde since 2012. Both partners are committed to preserving biodiversity and to finding ways of protecting biodiversity sustainably. The Hagenbeck-Schule partnership was developed for the long term with stability in mind. Projects are being developed in close cooperation between teachers and Museum staff. Here is a selection of projects that have so far been carried out:

Discovering nature in the city with the App Naturblick

Green cities provide space for experiencing nature, recreation and various encounters. However, nature can only be appreciated and protected if we approach it with understanding and knowledge. In the BMU-funded project "Discovering nature in the city" new media and digital technologies are being developed and used to raise awareness of urban nature and to communicate environmental education digitally. The "Naturblick" app is geared to young adults exploring Berlin’s nature. Easy-to-use identification keys help you to recognise species and to strengthen the perception of one's own neighbourhood as a place of nature experience and one's own sustainable engagement. This involves the individual acquisition of knowledge and skills and the possibilities of lifelong learning with a focus on urban biodiversity.

The Museum für Naturkunde has a learning lab, the Carl Zeiss Microscopy Centre and is part of the learning labs network GenaU (Gemeinsam für einen naturwissenschaftlich-technischen Unterricht).
The network consists of learning labs at research institutions and universities in Berlin and Brandenburg. They offer experimenting courses for entire school classes of all ages in science and technology subjects.
They are complemented by higher-level work groups and continuous training for teachers.
Further information at www.genau-bb.de

In cooperation with the organisation Vereinigung Junger Freiwilliger e. V. (Association of Young Volunteers), six young adults can currently spend a Voluntary Ecological Year in the scientific collection at the Museum für Naturkunde. Here they support the museum staff in the inventory and digitisation of collection objects and in their scientific work. They also accompany visitors in the open Microscopy Centre as well as school groups in microscopy courses and excursions. Young adults, who would like to get to know the scientific and educational work at a research museum and have pleasure in bringing science closer to visitors, can register with the Vereinigung junger Freiwilliger e.V..

The Museum also cooperates with following institutions and schools: