Dinosaurs! Age of the giant lizards 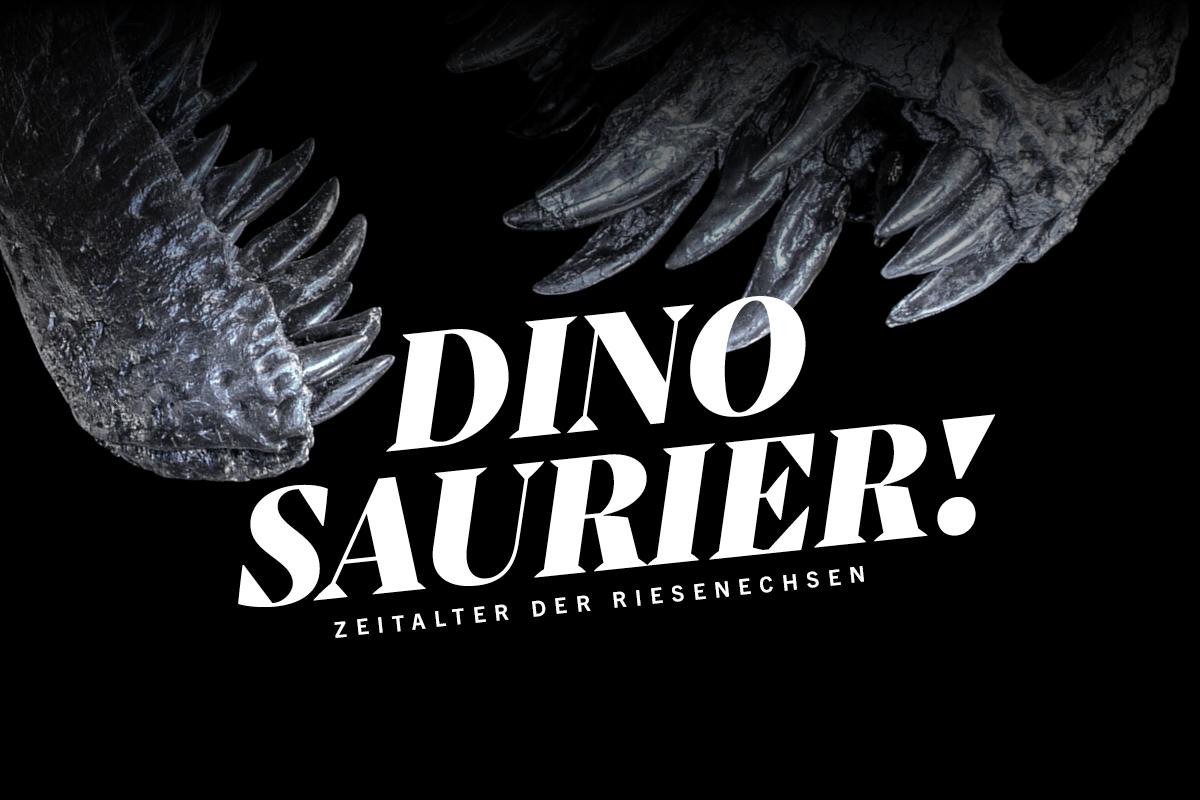 The new special exhibition "Dinosaurs!" lets you discover dinosaurs from the three geological eras Triassic, Jurassic and Cretaceous for the first time.

Dinosaurs were an incredibly successful group of animals. They populated our planet for more than 150 million years, with their reign spanning three geological eras: Triassic, Jurassic and Cretaceous. They survived one of the five great mass extinctions and adapted to changing environmental conditions. The end of their reign came suddenly and occurred 66 million years ago.

What does this story have to do with us? Find out and be amazed by spectacular fossils from three ages of the dinosaur era.

Star of the exhibition: Tristan Otto

The twelve meters long and four meters high skeleton of the predatory dinosaur from the Upper Cretaceous period is 66 million years old. Its night-black colour is characteristic of fossils from the so-called Hell Creek Formation, a fossil-rich rock layer in the US state of Montana, where the T. rex was found in 2010. Like Tristan Otto, all previous T. rex finds originate from North America. The recovery and preservation of the bones took a total of four years. Tristan Otto is one of the best-preserved Tyrannosaurus rex specimens worldwide, with an almost completely preserved skull. He is named after the sons of the two owners.

Eye to eye with predatory dinosaurs

The exhibition kicks off with three original spectacular predatory dinosaur skulls on display. Surrounded by sharp teeth, visitors can view the impressive skulls of T. rex Tristan Otto and Allosaurus up close. This meeting of the leading predators Allosaurus and T. rex would never have happened in real life. Allosaurus roamed the forests in the Jurassic period, while T. rex lived about 80 million years later in the Cretaceous period. The skull of a T. rex juvenile called “Casper” by its owner is also part of the presentation. Casper only reached the age of about seven years, so they were a special find as young T. rex have been found only rarely so far. Visitors can explore what is known today about the predatory and social behaviour of the carnivores eye to eye with the predatory dinosaurs.

A walk through the history of the earth

Different dinosaur species lived in the three geological eras, which visitors move through in this special exhibition. Beginning with the oldest Earth Age, the Triassic, visitors travel to the Jurassic period and complete their tour in the Cretaceous period 66 million years ago. Along the way, they encounter dinosaurs from all these geological eras. Visitors are welcomed by Plateosaurus, a Triassic herbivore that is not only the oldest dinosaur in the exhibition in terms of geological history, but also one of the earliest dinosaur finds ever discovered, dating back to 1834.

In the following Jurassic Age, the dinosaurs had their heyday. This age is well known through the film "Jurassic Park". The skeleton of the small Nanosaurus also comes from this time. In contrast to its predatory contemporaries the Allosaurs, the Nanosaurus fed on plants. At the end of the journey through the history of earth, the T. rex Tristan Otto awaits the visitors. He was one of the last living dinosaur species.

Or was he not?

Most of the pieces in the special exhibition "Dinosaurs!" are loans from private owners. You can find out more about the topic of privately owned fossils here.