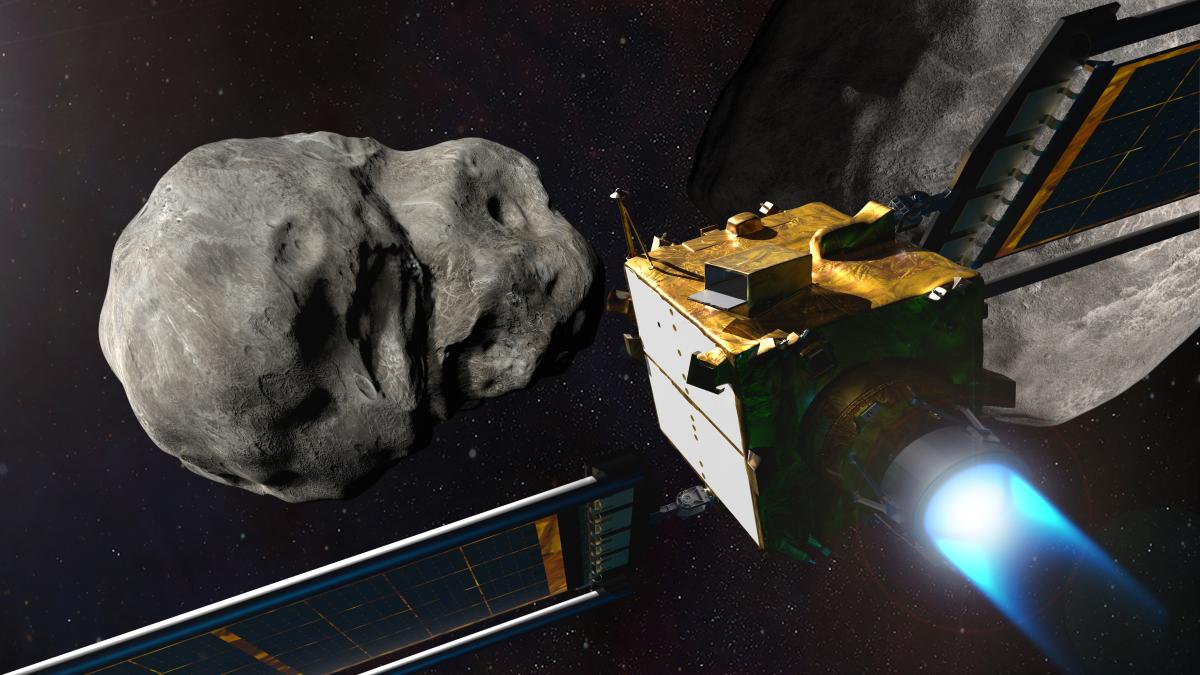 NASA's DART space probe, launched last year, will test whether the course of an asteroid can be changed at a distance of eleven million kilometres from Earth on 27 September 2022 at 1.14 a.m. CEST. DART will make a targeted impact on the 170-metre asteroid Dimorphos. It is the first time in the history of spaceflight that an attempt will be made to influence the orbit of a celestial body by a man-made body. The German Aerospace Center (DLR) and the Museum für Naturkunde Berlin are involved in the analysis of the impact.

The Earth has always been threatened by asteroids. The extinction of the dinosaurs was triggered by an asteroid hit. That the danger of the strike of an asteroid on Earth remains real today became clear on 15 February 2013. At that time, an asteroid entered the Earth's atmosphere and exploded over the Russian city of Chelyabinsk. More than 1,600 people were injured. Yet the object was only about 18 metres in size.

"We live in the age of space travel. This gives us the opportunity to use space probes to change the orbit of an asteroid that is threatening to crash into Earth," says Dr Jean-Baptiste Vincent of the DLR Institute of Planetary Research. The German Aerospace Center (DLR) has been observing and characterising Earth-crossing asteroids for decades.

"On the one hand, we try to characterise these small but sometimes also dangerous celestial bodies, to understand their physical properties, and on the other hand, to draw conclusions on how we could ward them off should calculations show that they will collide with Earth in the future," explains Dr Stephan Ulamec from the DLR User Centre for Space Experiments (MUSC) in Cologne.

"How efficiently an asteroid is deflected by colliding with a spacecraft is decisively influenced by the physical properties of the body, i.e. how porous and solid the rock is," explains Prof. Dr. Wünnemann from the Museum für Naturkunde Berlin, who, together with his team, creates computer simulations of the impact process in order to make predictions that are as precise as possible.

All three scientists are involved in the NASA mission DART ("Double Asteroid Redirection Test"). DART is a cube-shaped satellite with an edge length of just under two metres and a mass of 610 kilograms. The mission was launched on 24 November 2021 and directed to its target, the binary asteroid Didymos with its satellite Dimorphos. Didymos, the larger of the two bodies, has an irregular diameter of nearly 800 metres, Dimorphos of 170 metres. Dimorphos orbits Didymos in twelve hours at a distance of 1,200 metres. The two asteroids orbit the Sun in 25 months on an orbit that intersects with Earth's orbit, making them potentially dangerous "NEOs" (Near-Earth Objects). In 2003, the two asteroids came within six million kilometres of Earth.

The researchers assume that the asteroids' orbital periods change by a few minutes due to the impulse from DART, depending on the nature of the material. Is it a compact body or a rubble pile of rock fragments? At the Museum für Naturkunde Berlin, Wünnemann and his team are simulating various scenarios of Dimorphos' composition in order to predict the size of the crater, among other things.

The space probe is completely destroyed on impact. The impact is observed by two previously deployed small satellites developed by the Italian Space Agency (ASI). The small satellites will communicate directly with Earth, send back images of the crater measuring a few tens of metres, the ejecta and the cloud from the impact of DART, and take measurements from a distance of 55 kilometres three days after the impact during their flyby of Didymos and Dimorphos. NASA's Lucy mission, launched last year to the "Trojan" asteroids in Jupiter's orbit, will also observe the impact from a distance of 19 million kilometres.

For a detailed study of the impact and its aftermath, the European Space Agency's Hera mission, coordinated with NASA, will be launched in 2024 and is expected to reach the binary asteroid system in December 2026, about four years after DART's impact. Hera's detailed investigations will then significantly expand knowledge about the possibilities of asteroid deflection. DART and Hera are missions of the international research project AIDA (Asteroid Impact and Deflection Assessment).

Press pictures can be downloaded here.