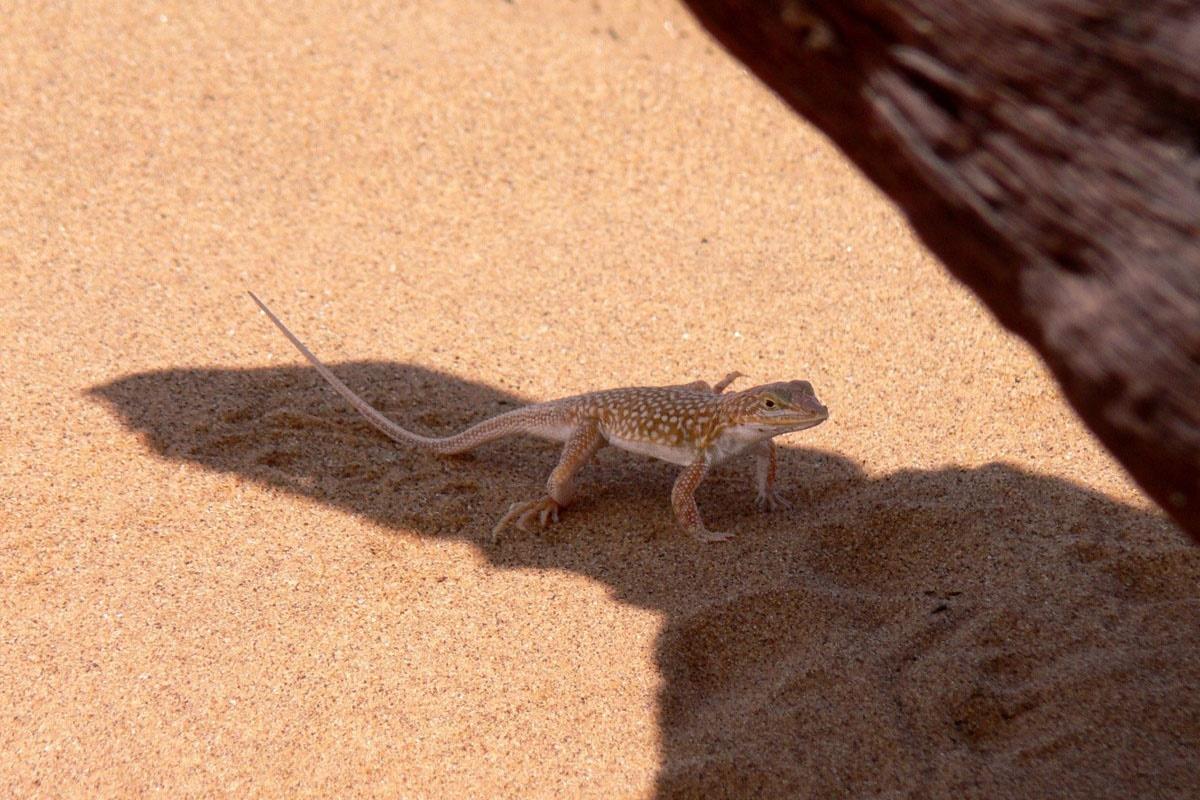 A team of scientists from 17 countries, including the Museum für Naturkunde in Berlin, is today publishing ecological research on lizards in Nature Communications and investigating the question of whether these animals, which are warm and changeable, benefit from climate change. The study shows that tropical lizard species often operate at body temperatures close to the ambient temperature. These species will not survive if climate change leads to elevated ambient temperatures. Species from temperate climates are also at risk, as warmer temperatures are associated with reduced humidity. Species are forced to be more active than they can tolerate in drier conditions.

Lizards are a group of animals that proverbially love the sun (also called “heliotherms”). Because these are cold-blooded animals, they depend on warmth and solar radiation to attain the temperatures they like. So the obvious hypothesis would be that they will benefit from global warming. But will they?

Climate change is toppling our Earth's ecosystems out of balance in multiple ways, with often dramatic consequences. But surprisingly, the underlying processes are only poorly understood, and it often is unknown how the actual consequences - negative or sometimes even positive? - will look like.

A team of 45 researchers from 17 countries has now come closer to answering these questions in a study published today in "Nature Communications". The researchers focused on the physiology of the so-called lacertid lizards, a group that is widespread in Europe, Asia and Africa. Lacertid lizards contain species occurring in the blazing heat of the Namib desert, but many others are restricted to chilly habitats on mountains above 2000m in Europe. One of them, the Viviparous Lizard, even reaches the Arctic Circle, farther north than any other reptile.

To everyone in Europe, these are perhaps the most well-known reptiles, regularly seen basking on stone walls around the Mediterranean, sand dunes in the Netherlands and piles of wood in Germany. “These lizards have been one of the dominant reptile groups in Europe for more than 20 million years, but are now getting increasingly threatened”, says Johannes Müller, a paleontologist at the Museum of Natural History Berlin, Germany. Miguel Vences, an evolutionary biologist at Braunschweig University of Technology who coordinated the study explains the team's motivation: "The Wall Lizard in Germany is rapidly expanding its range with rising temperatures while other species on mountains in Spain are disappearing. We need to better understand why some of these lizards are threatened and others not - this is why we set out to study their physiology and evolutionary history".

Lizard biology is determined by climate

The study experimentally determined which temperature lacertid lizards prefer, and how tolerant they are against water loss in arid conditions, against the backdrop of their evolutionary tree. It was known that lizards in tropical environments often operate at temperatures very close to those of the environment, and this was not different in tropical lacertids - when climate change leads to a temperature increase in their environment, they may not be able to persist.

"We found in these lizards a strong adjustment between physiology and environmental temperature and this likely makes them very sensitive to global warming” concludes Joan Garcia-Porta, researcher at the Centre for Research on Ecology and Forestry Applications, CREAF, Spain and currently at Washington University in St Louis, USA, the first author of this study.

But what about lacertids in temperate environments? Based on newly compiled physiology data of over 50 species, the researchers found that much of their biology is equally determined by climate. Miguel Vences comments: "It was amazing to discover how neatly these species are adapted to their environment. Their physiology, size of distribution ranges, species richness, and even mutation rates - everything correlates strongly to the temperatures they experience in the wild."

The study used state-of-the-art DNA sequencing methods and analyses of fossils to reconstruct the evolution of 262 species of lacertid lizards. According to Iker Irisarri, a researcher at the Spanish Research Council CSIC in Madrid who contributed to these analyses: "These animals in Europe have been the focus of hundreds of studies over the last years. Our new genomic analyses finally ascertained how they relate to each other in evolutionary terms, and when they originated."

Glimpsing into the past of lacertid evolution showed that many of them originated in warm past climates, but since then they have adapted as Earth cooled down, and spread into very cold regions in the process. "The story of non-tropical lacertids is one of persistence against cold. There has been no precedent in their evolution to cope with either heat or with dry conditions for millions of years" says Katharina Valero, a lecturer at the University of Hull, UK.

Lacertid declines so far are affecting mostly species on mountains and dense forests. Confirmation of the study's hypothesis comes from the perhaps most cool- and moist-loving viviparous lizard. "Populations in the Pyrenean Mountains with particularly high environmental temperatures are already extinct - a presage of what might happen with other lizards." says Barry Sinervo, a professor at University of California at Santa Cruz who has been studying lizard declines for over 10 years.

Miguel-Angel Carretero, a lizard specialist at CIBIO institute, Portugal, adds: "The mechanisms by which these lizards decline are complex, but we start to understand them better. Warmer temperatures also mean lower humidity, and climate change forces these lizards being active in dry environments that they cannot cope with".