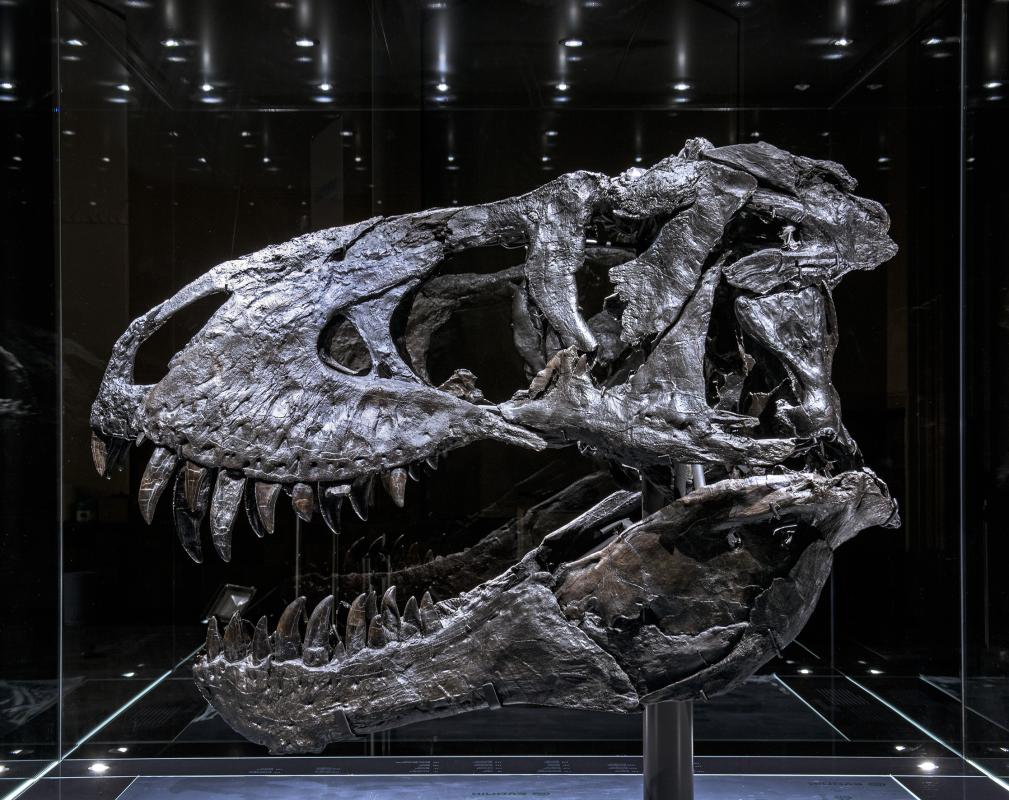 Researchers in Germany identified bone disease in the fossilized jaw of a Tyrannosaurus rex (T. rex) using a CT-based, nondestructive imaging approach, according to a study being presented at the annual meeting of the Radiological Society of North America (RSNA). The imaging method could have significant applications in paleontology, researchers said, as an alternative to fossil assessment methods that involve the destruction of samples.

A familiar subject of today’s popular culture, the T. rex was a massive, carnivorous dinosaur that roamed what is now the western United States millions of years ago. In 2010, a commercial paleontologist working in in Carter County, Montana, discovered one of the most complete T. rex skeletons ever found. The matte-black fossilized skeleton dates back approximately 68 million years to the Late Cretaceous period. It was sold to an investment banker, who dubbed it “Tristan Otto” before loaning it out to the Museum für Naturkunde in Berlin. It is one of only two original T. rex skeletons in Europe.

Charlie Hamm, M.D., a radiologist at Charité University Hospital in Berlin, and his colleagues recently had an opportunity to investigate a portion of the Triston Otto’s lower left jaw. While previous fossil studies have mostly relied on invasive sampling and analysis, Dr. Hamm and colleagues used a noninvasive approach with a clinical CT-scanner and a technique called dual-energy computed tomography (DECT). DECT deploys X-rays at two different energy levels to provide information about tissue composition and disease processes not possible with single-energy CT.

The CT technique enabled the researchers to overcome the difficulties of scanning a large portion of Tristan Otto’s lower jaw called the left dentary. The piece’s high density was a particular challenging, as CT imaging quality is known to suffer from artefacts when looking at dense objects.

“We needed to adjust the CT scanner’s tube current and voltage in order to minimize artefacts and improve image quality, said Dr. Hamm. “Fortunately, our team has quite some experience in that field, enabling us to quickly optimize the imaging protocol.”

On visual inspection and CT imaging, the left dentary showed thickening and a mass on its surface that extended to the root of one of the teeth. DECT detected a significant accumulation of the element fluorine in the mass, a finding associated with areas with decreased bone density. The mass and fluorine accumulation supported the diagnosis of tumefactive osteomyelitis, an infection of the bone.

“While this is a proof-of-concept study, DECT noninvasive imaging that provides morphological and molecular information on often unique fossil objects might answer an unmet need in paleontology, avoiding defragmentation or destruction,” Dr. Hamm said.

The DECT approach has promise in other paleontological applications, such as age determination and differentiation of actual bone from replicas. The experimental design, including the use of a clinical CT scanner, will allow for broad applications without the need of an experimental setup, Dr. Oliver Hampe, Senior Scientist and vertebrate paleontologist from the Museum für Naturkunde in Berlin, said.

The new study is just the latest in a series of paleontological research projects Dr. Hamm and his colleagues at the Charité and the Museum für Naturkunde  in Berlin has been involved in. Recently, they collaborated with paleontologists from the Chicago’s Field Museum and colleagues from the Richard and Loan Hill Department of Bioengineering at the University of Illinois at Chicago to perform a CT analysis of the world-famous T. rex “Sue” that is housed in the museum.

“With every project, our collaborative network grew and evolved into a truly multidisciplinary group of experts in geology, mineralogy, paleontology, and radiology, emphasizing the multidisciplinary nature and relevance of the results to different scientific fields,” Dr. Hamm said.

The authors would like to thank Niels Nielsen and Jens Peter Jensen for making the T. rex available to the scientific community.