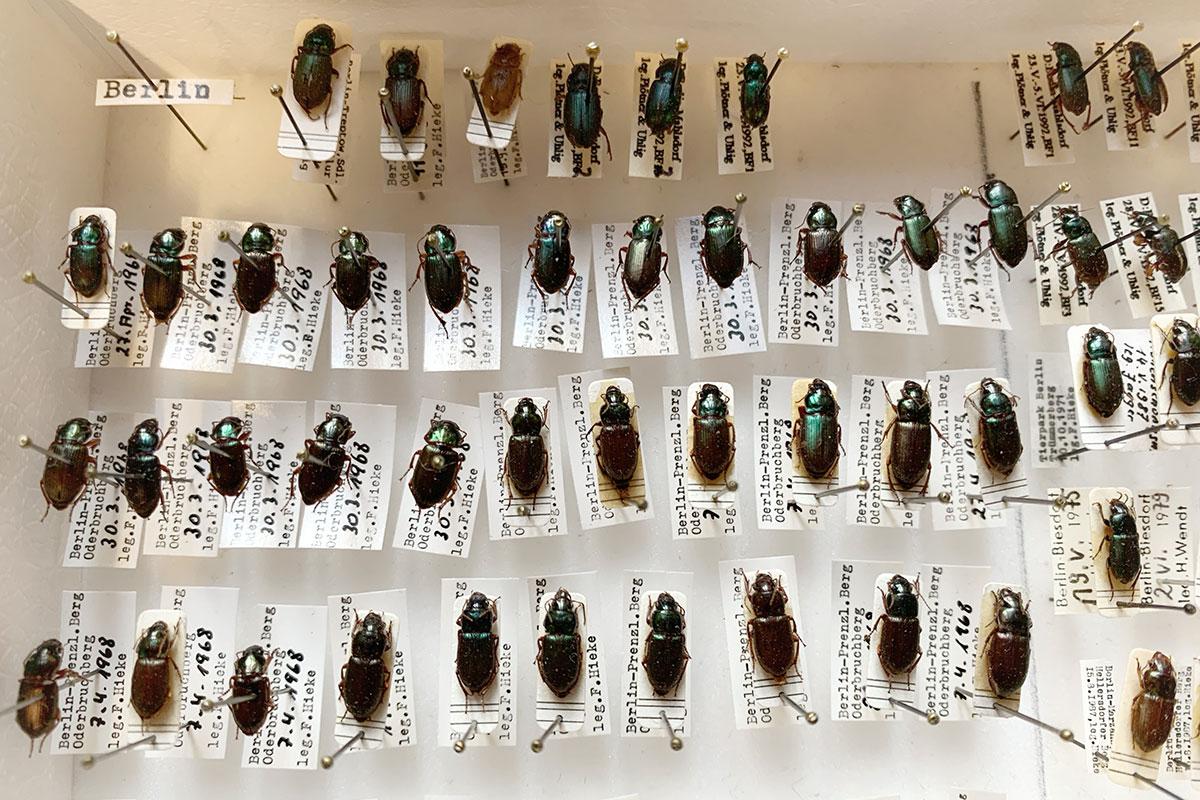 Environmental changes usually lead to the replacement of original animal and plant communities by new assemblages. However, some species persist and thus should show respective adaptations to the new environmental conditions. A team of researchers from the Museum für Naturkunde Berlin has now demonstrated, using a ground beetle species, that the living conditions for this beetle in Berlin have improved over the last 125 years. The study in the journal 'Frontiers in Ecology and Evolution' also shows in exemplarily how important natural history collections are for the study of the effects of long-term environmental changes.

Humans constantly change the environment. Urbanisation and agriculture in particular have led and continue to lead to the establishing of new ecosystems. Species composition in these new ecosystems often differs fundamentally from that of the original habitats; many species disappear, new ones immigrate. However, there are also species that can cope with the changes and persists in the altered environment. At the Berlin-Brandenburg Institute for Biodiversity Research (BBIB), a consortium of four universities and five Leibniz Institutes, researchers from a wide range of disciplines study the biodiversity and ecology of animals and plants in Berlin and Brandenburg. Within this research network, a team of researchers from the Museum für Naturkunde Berlin has set itself the task of investigating whether and how species in this region have adapted to changes over the past 125 years.

For a study now published in the journal 'Frontiers in Ecology and Evolution' and financed by the Federal Ministry of Education and Research (BMBF,  mso-ascii-theme-font:minor-latin;mso-fareast-font-family:Calibri;mso-fareast-theme-font:
minor-latin;mso-hansi-theme-font:minor-latin;mso-bidi-font-family:"Times New Roman";
mso-bidi-theme-font:minor-bidi;mso-ansi-language:DE;mso-fareast-language:EN-US;
mso-bidi-language:AR-SA">Verbundprojekt: Bridging in Biodiversity Science—BIBS; Förderkennzeichen: 01LC1501A-H), the researchers of the Museum für Naturkunde Berlin selected a ground beetle species that is still frequently found in the Berlin-Brandenburg region. Since comparisons of behaviour or biology are not possible retrospectively, the researchers looked for features that could provide information about the species' life history and that could still be reliably recorded on old collection specimens. The study species occurs in three different colour morphs: green, bronze or mixed colours. These colours can be recognised unchanged on museum specimens, even after more than 100 years. Altogether 660 individuals, collected at different times in different habitats in Berlin and Brandenburg, were available to the team. The oldest animal came to the Museum für Naturkunde Berlin in 1893.

The authors demonstrated that most of the animals are coloured green. Only females from Berlin, collected before or around the Second World War - at a time when environmental pollution was much higher than today - comprised more bronze-coloured individuals. From the 1950s until today, the number of bronze females decreased and the number of green females increased again. Among the male beetles, the proportion of different colour variants remained constant over the entire period, both in rural Brandenburg and in the urban area of Berlin. The researchers at the Museum für Naturkunde Berlin interpret these results as the result of different processes of natural and sexual selection. Since the green animal color morphs are more conspicuous to predators in (soot-)polluted habitats than the bronze animals, bronze females were more likely to survive the polluted city. When pollution in Berlin improved due to environmental protection measures, the green colour morphs, which also dominated in more natural habitats, regained their dominance. Silvia Keinath, the first author of the study, explains: "It is remarkable that these significant adaptations could occur within such a short period of time and that these changes are gender-specific.” The authors assume that the female beetles have a greater preference for green males, thus preventing the males from adapting to the polluted environment. Mark-Oliver Rödel, head of the study, adds: "This work shows in an exemplary way how research collections of natural history museum scan contribute to track and understand changes in species and ecosystems over long periods of time".