Knees and hips: Muscle studies in dinosaurs and their relatives 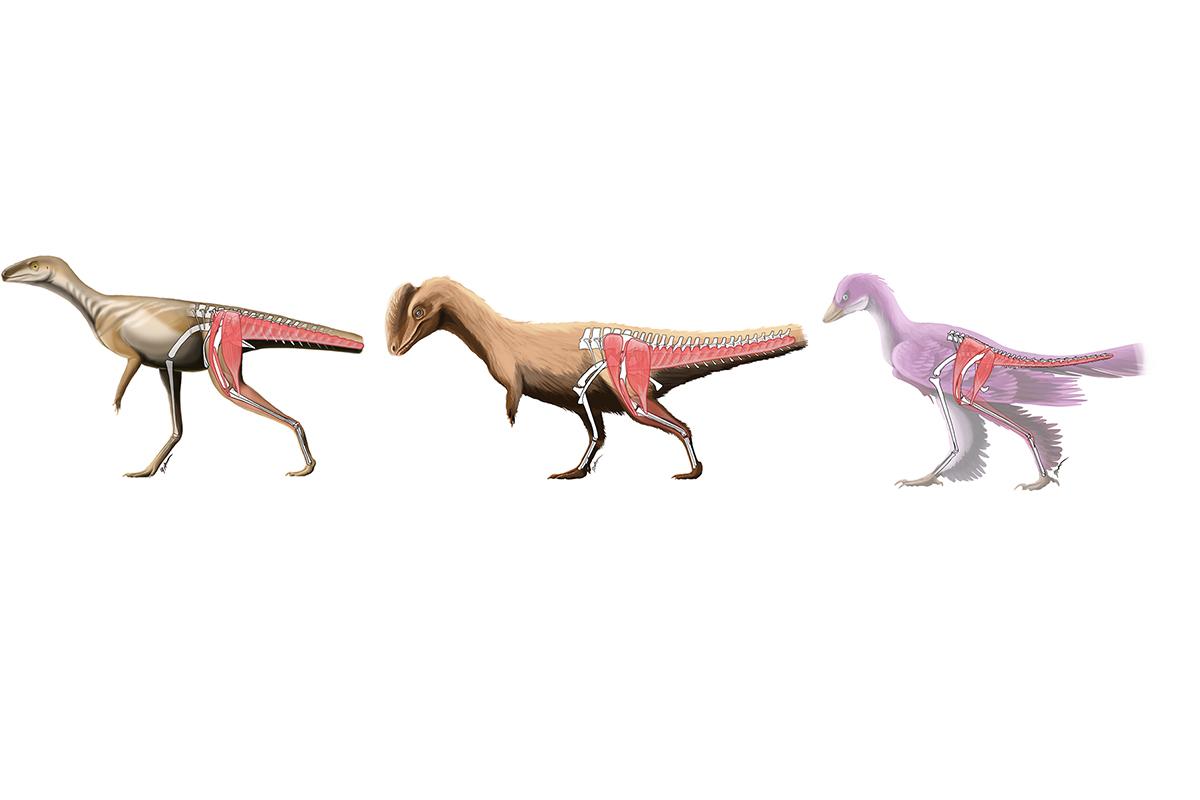 A new study provides insights into the development of leg muscles in dinosaurs. Researchers at the Royal Veterinary College (RVC) in London, in collaboration with Brandon Kilbourne, Museum für Naturkunde Berlin, scanned fossil bones of dinosaurs to create digital skeletons with muscles anatomically positioned over the bones. The results of the simulations and modeling show that the locomotion of birds and their dinosaur ancestors differed significantly and that the locomotion of early dinosaurs was more comparable to mammals, such as humans, rather than birds.

Researchers from the Royal Veterinary College (RVC) in collaboration with Brandon Kilbourne of the Museum für Naturkunde Berlin published a new study today in Science Advances. The team scanned fossils of dinosaurs, including those from the museum's research collection, created 3D models of the bones and articulated them into digital skeletons. They then added hindlimb muscles to the models. By examining the attachment points on the fossil bones and comparing them to living animals, they were able to determine where these muscles attached. The computer models then calculated the leverage of the muscles around the joints, and statistical analyses plotted the changes in these functions over the course of dinosaur evolution.

Models of thirteen species with 35 muscles were created. The researchers discovered that the ability of hind limb muscles to support and move the body changed dramatically before and during the evolutionary transition to birds. The change in hip muscles facilitated the birds' characteristic crouched leg posture - as opposed to a relatively upright posture in early dinosaurs and mammals. Knee muscles also reflected these changes, from a "hip-controlled" early mode of locomotion - as in living crocodiles - to a more "knee-controlled" one, as in modern birds. The most surprising discovery was that relatively large-bodied, carnivorous dinosaurs that used hind legs for bipedal locomotion during the early Jurassic period about 200 million years ago evolved an unusually specialized muscle function associated with more mobile leg joints.

The research findings have shed new light on previous knowledge regarding the evolution of dinosaur locomotion. Previously, it was thought that leg posture gradually became less upright and more crouched during dinosaur evolution, shifting from a hip-driven to a knee-driven mechanism of walking and running. However, the discovery of specializations in large-bodied dinosaurs uncovered an intriguing "reinvention" of the mechanism of limb function that did not fit easily into the bird-like evolutionary pattern. The team interpreted this "reinvention" as a phase of locomotor evolution that was reversed in the later avian lineage.

"The locomotion of early dinosaurs is in some respects more comparable to that of mammals than birds. Using musculoskeletal models, we have studied the evolutionary changes over 230 million years that led to the knee taking a central role in the terrestrial locomotion of the roughly 10,000 bird species living today. By looking at changes in the three-dimensional leverage of 35 muscles over hundreds of millions of years, we have a clearer picture of this transformation and its complexity than ever before," said second author Dr. Brandon Kilbourne of the Museum für Naturkunde Berlin.

Pictures for free in relation to the press release.