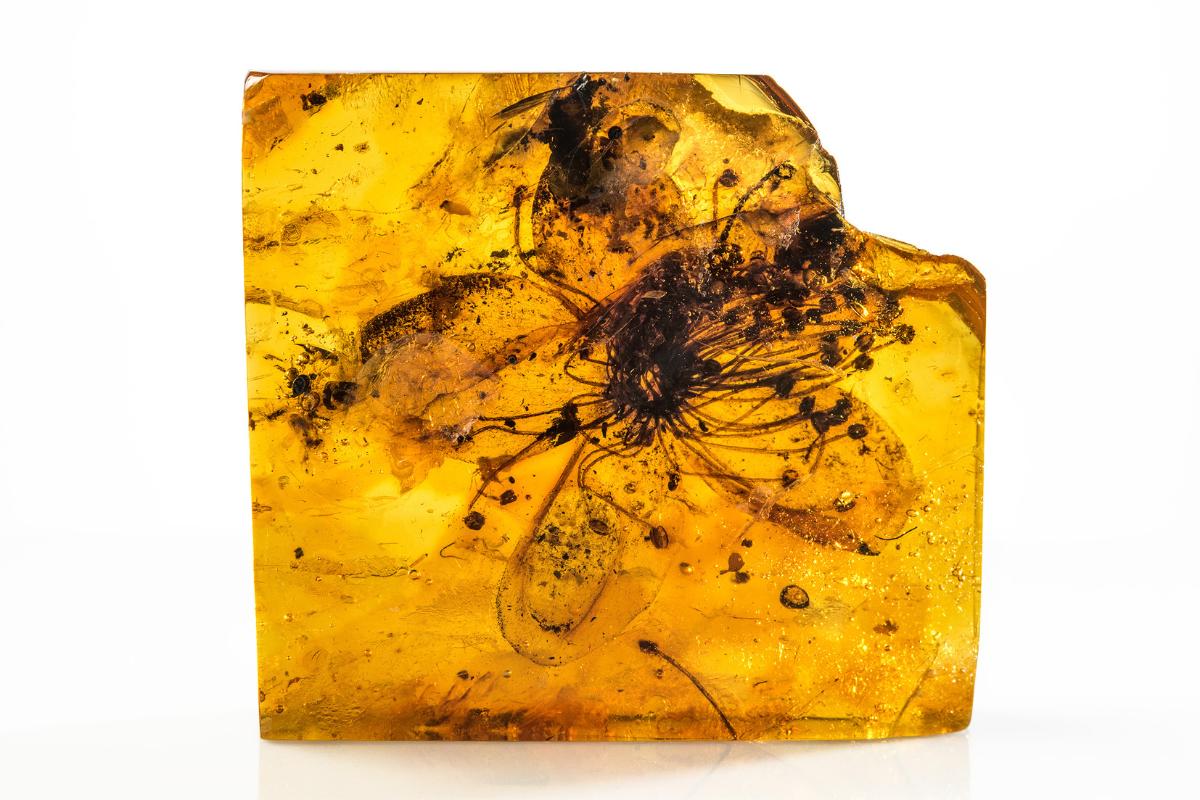 Scientists of the Museum für Naturkunde Berlin and the University of Vienna studied an exceptionally large flower inclusion, almost measuring 3 cm across. This flower and its pollen were enclosed and preserved in resin about 38-34 million years ago. It is about three times as large as most floral inclusions and therefore the largest flower, which was discovered from any amber so far. These new findings help to shed new light into the Baltic amber forest and allow drawing conclusions about the climate of the past, as well as the evolution of forests.

Amber is like a time capsule – it preserves inclusions of plants and animals over millions of years in incredible detail. Plant inclusions in amber are specifically rare, but extremely valuable for science. They allow to reconstruct the vegetation during several periods of Earth history and to understand the flora of the so-called amber forests.

The flower inclusion of this study is enclosed in Baltic amber and derives from the largest amber deposit worldwide in Kaliningrad at the Baltic Sea coast. The flower was described over 150 years ago as Stewartia, a genus that belongs to the tea family (Theaceae). However, in the following years, this was regarded as doubtful.

Dr. Eva-Maria Sadowski of the Museum für Naturkunde Berlin and Dr. Christa-Charlotte Hofmann of the University of Vienna comprehensively revised this fossil for the first time, which is currently housed at the Federal Institute for Geosciences and Natural Resources (Berlin, Germany).

In general, amber inclusions of flowers are a few millimeters small and only rarely, larger than 10 mm. It is still unknown, which processes might limit the size of plant inclusions. However, it is suggested that depending on the resin surface tension and viscosity, smaller plant organs are likely more easily retained than larger ones. The scientists discovered numerous pollen grains that were released by the stamens of the amber flower. "It is very exceptional to find such a large flower in amber, with the stamens at the perfect point of being just open to release their pollen while the flower was retained by resin," says Eva-Maria Sadowski.

The pollen was carefully scratched out of the inclusion by using a scalpel and then, the scientists examined the pollen grains under a scanning electron microscope. "Only an extremely high magnification allows us to see the morphological details of the pollen grains that are only few micrometers in size," adds Christa Hofmann.

The features of the pollen and the flower inclusion helped the scientists to assign this fossil to an Asian member of the genus Symplocos, which contains trees and shrubs of the "sweetleaf" family (Symplocaceae). It is the first fossil record of this genus from Baltic amber – but Symplocos was not the only plant of the Baltic amber forest. About 34 to 38 million years ago, this forest harbored numerous plant species whose modern relatives are also restricted to East and South East Asia.

During that time, the climate in Europe was warmer and rainfall was more common, which allowed members of the beech family (e.g. chinkapin, Castanopsis) and conifers (such as the Japanese cedar, Cryptomeria) to thrive. Together, they formed a diverse ecosystem, composed of coastal swamps, mires and mixed forest. "Our new findings about this extraordinary and beautiful flower inclusion are additional puzzle pieces that allow us to decipher the flora of the Baltic amber forest and to understand the climate of the past." Eva-Maria Sadowski says. "This new knowledge helps us to gain deeper insights into the forests of Earth’s history and to understand their evolution in time and space."