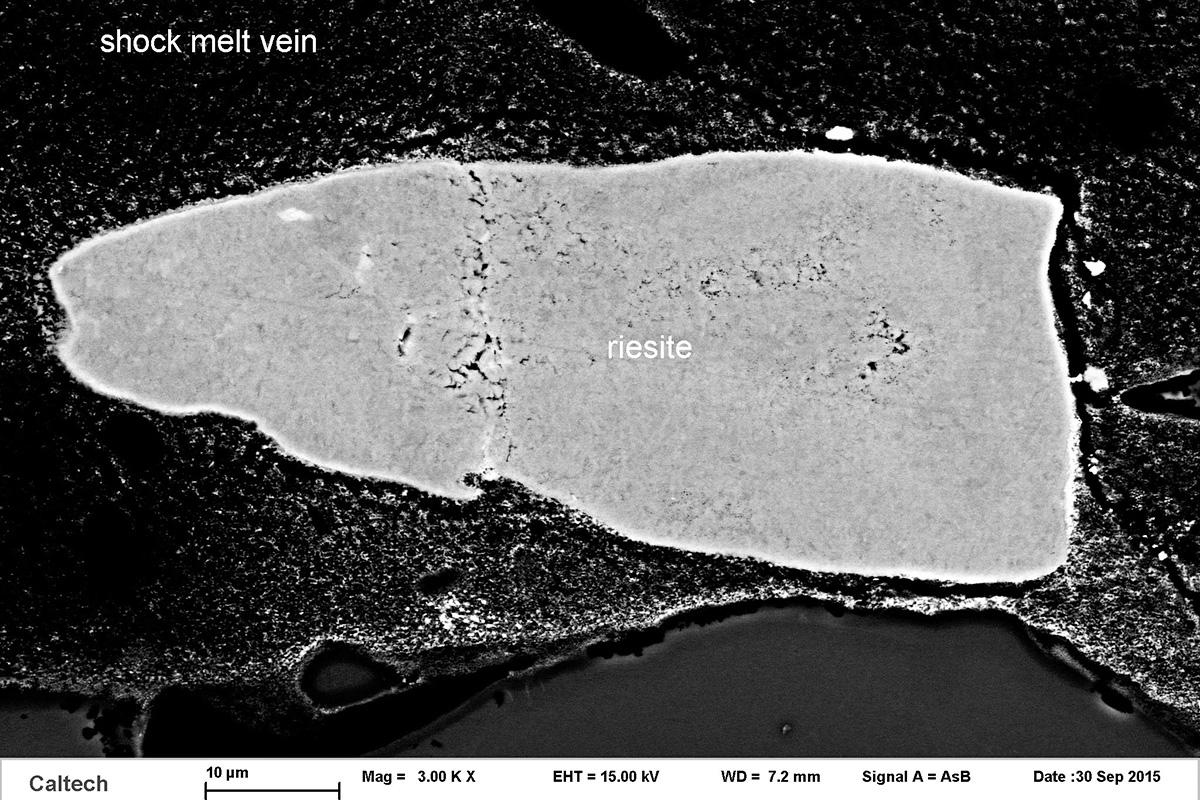 A new, so far unknown mineral has been discovered in the Ries of Nördlingen, one of the best-preserved impact craters on Earth formed some 15 million years ago by the impact of an asteroid. It has therefore been named “riesite”. Its discovery is the result of an international cooperation between scientists from the USA and Germany who are working in Las Vegas, Heidelberg, and in the Natural History Museum at Berlin.

For the new high-pressure mineral discovered in the Ries crater, the discoverer Prof. Oliver Tschauner (Las Vegas) and Prof. Chi Ma (Pasadena) proposed the name “riesite”. The International Mineralogical Association (IMA) confirmed this name officially in January 2017. The discovery of this mineral is the result of a new analytical technique in which synchrotron radiation is applied instead of the more conventional techniques such as optical microscopy or electron microscopy. PD Dr. Volker Stähle (Heidelberg), and Prof. Dieter Stöffler (Berlin) provided suitable samples from the Ries to the US colleagues.

“Impact research is one of the core subjects on which the Museum für Naturkunde focuses its work. Impact research has significant implications for our society, as became clear recently when an asteroid came close to Earth,” as Prof. Johannes Vogel, Director General of the Museum für Naturkunde Berlin, explains. “It is our mission to draw attention to our research and inspire the public with our enthusiasm for nature.”

Riesite occurs in the form of extremely small grains. It was found in melt veins of a gneiss-like rock that was exposed to extremely high pressure and to temperatures of more than 1500 °C during the Ries impact. Riesite is chemically a special high-pressure form of titanium dioxide (TiO2). Titanium dioxide occurs in small amounts as the mineral rutile in many crustal rocks of the Earth and therefore also in the crystalline basement rocks of the Ries. They were originally present in a depth of more than 600 m. The impact exposed them to extremely high pressure and temperature and ejected the shock-metamorphosed rocks out of the crater to the surface where they were deposited as the so-called suevite breccia. The transition from rutile to riesite is rather complicated because rutile is first transformed to another high-pressure mineral called akaogiite. Subsequently akaogiite transforms in part to the mineral riesite during pressure-temperature release.

The suevite layer, in which riesite was detected, forms the uppermost layer of the ejecta blanket of the Ries crater. Suevite is a typical rock that occurs in a large number of impact craters on Earth. Already the Romans used suevite as a building stone in the Ries. During the Middle Age, it was frequently used in Nördlingen and other towns of the Ries and in the 19th century even in cities like Leipzig and Berlin. On the walls of buildings made from suevite stones, such as the St. George cathedral in Nördlingen, one can see inclusions of rocks, which contain riesite and many other high-pressure minerals, altogether 10 minerals including diamond. This is the highest number of high-pressure minerals among all known 190 impact craters on Earth.