A new mineral from the Moon 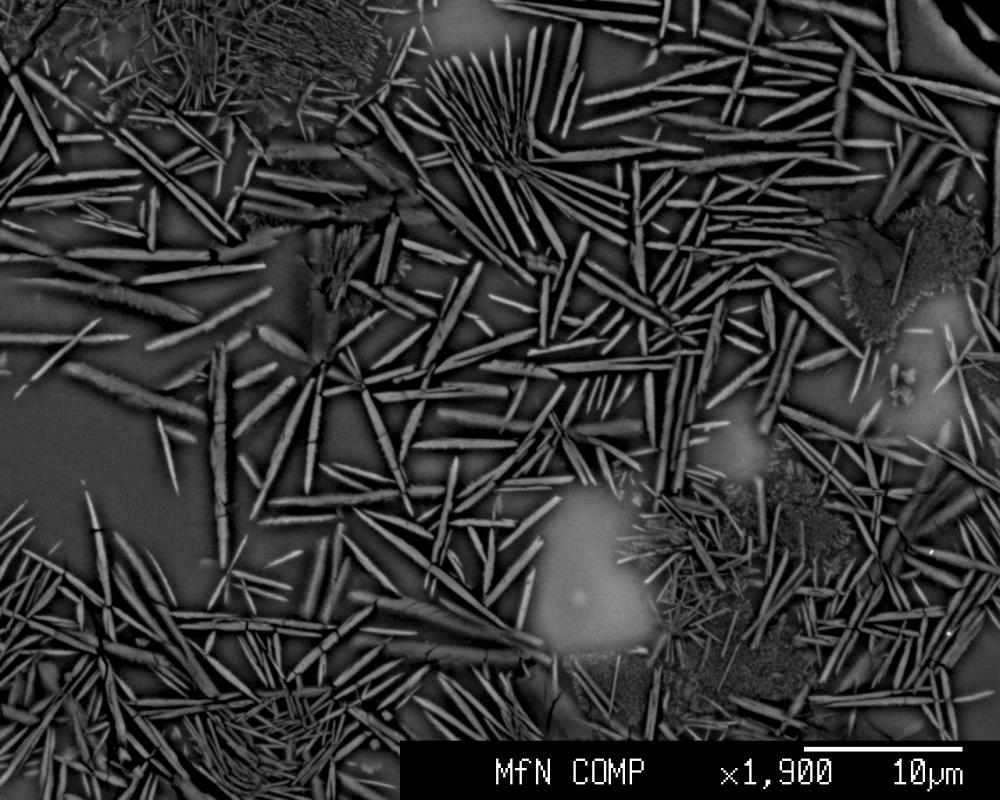 A team of European researchers with participation of the Museum für Naturkunde Berlin has discovered and described a new high-pressure mineral in the lunar meteorite Oued Awlitis 001, named donwilhelmsite, which is of great relevance for the formation history of the moon and for processes occurring in the Earth’s interior.

"Since 25 years I am almost daily working on meteorites, but discovering a new mineral and seeing it for the first time is really an outstanding experience", says Ansgar Greshake, Scientific Head of the Meteorite Collection at the Museum für Naturkunde Berlin.

Impact and meteorite research is one of the main research topics of the Museum für Naturkunde Berlin. The formation and subsequent geological as well as biological evolution of planet Earth was strongly influenced by large-scale impacts of cosmic bodies. These extraterrestrial projectiles sometimes also hold some secrets such as previously unknown minerals. Currently, there are only about 5,000 minerals known worldwide. Now, an international research team with participation of the Museum für Naturkunde discovered a new mineral in a lunar meteorite.

Besides the about 382 kilograms of rocks and soils collected by the Apollo and Luna missions, lunar meteorites allow valuable insights into the formation of the Moon. The crater-covered lunar surface attests to the strong influence of asteroid impacts on the geological evolution of the Earth’s satellite. In rare cases, some material ejected by such impacts was subsequently delivered as lunar meteorites to Earth. Some of these meteorites experienced particularly high temperatures and pressures during their ejection. The extreme physical conditions often led to shock melting of microscopic areas forming veins or melt pockets within the meteorites. These shocked areas are of great relevance as they mirror pressure and temperature regimes similar to those prevailing in the Earth’s mantle, and therefore are natural crucibles hosting minerals that are otherwise naturally inaccessible at the Earth’s surface. Minerals like wadsleyite, ringwoodite, and bridgmanite, constituting large parts of the Earth’s mantle and synthesized in high-pressure laboratory experiments, are commonly described and named based on their natural occurrences in meteorites.

The new mineral donwilhelmsite [CaAl4Si2O11] is the first high-pressure mineral found in meteorites with application for subducted terrestrial sediments. Mainly composed of calcium, aluminum, silicon, and oxygen atoms, donwilhelmsite was discovered within shock melt zones of the lunar meteorite Oued Awlitis 001 found in 2014 in the Western Sahara. This meteorite is compositionally similar to rocks comprising the Earth’s continents. Eroded sediments from these continents are transported by wind and rivers to the oceans, and subducted into the Earth’s mantle as part of the dense oceanic crust. Once dragged to depths of about 460-700 km, their constituent minerals transform at high pressures and high temperatures existing at those depths into denser mineral phases, including the newly discovered mineral donwilhelmsite. In the terrestrial rock cycle, donwilhelmsite is therefore an important agent for transporting crustal sediments through the transition zone of the Earth’s mantle (460-700 km depth).

The new mineral was named in honor of the lunar geologist Don E. Wilhelms, an American scientist involved in landing site selection and data analyses of the Apollo space missions that brought to Earth the first rock samples from the Moon. Part of the meteorite Oued Awlitis 001 is now on display at the Natural History Museum Vienna.

Free pictures in conclusion with that press release:

1. Scanning electron microscope image of the new mineral, Donwilhelmsite, in the lunar meteorite Oued Awlitis 001. © Museum für Naturkunde Berlin, Ansgar Greshake
2. Electron diffraction pattern from one direction and the crystal structure model of donwilhelmsite © Institute of Physics of the Czech Academy of Science, Mariana Klementova.
3. Fragments of the lunar meteorite Oued Awlitis 001 acquired by the NHM Vienna and used for the scientific analyses. The largest specimen is on display at the NHM Vienna. © NHM Vienna, Ludovic Ferrière