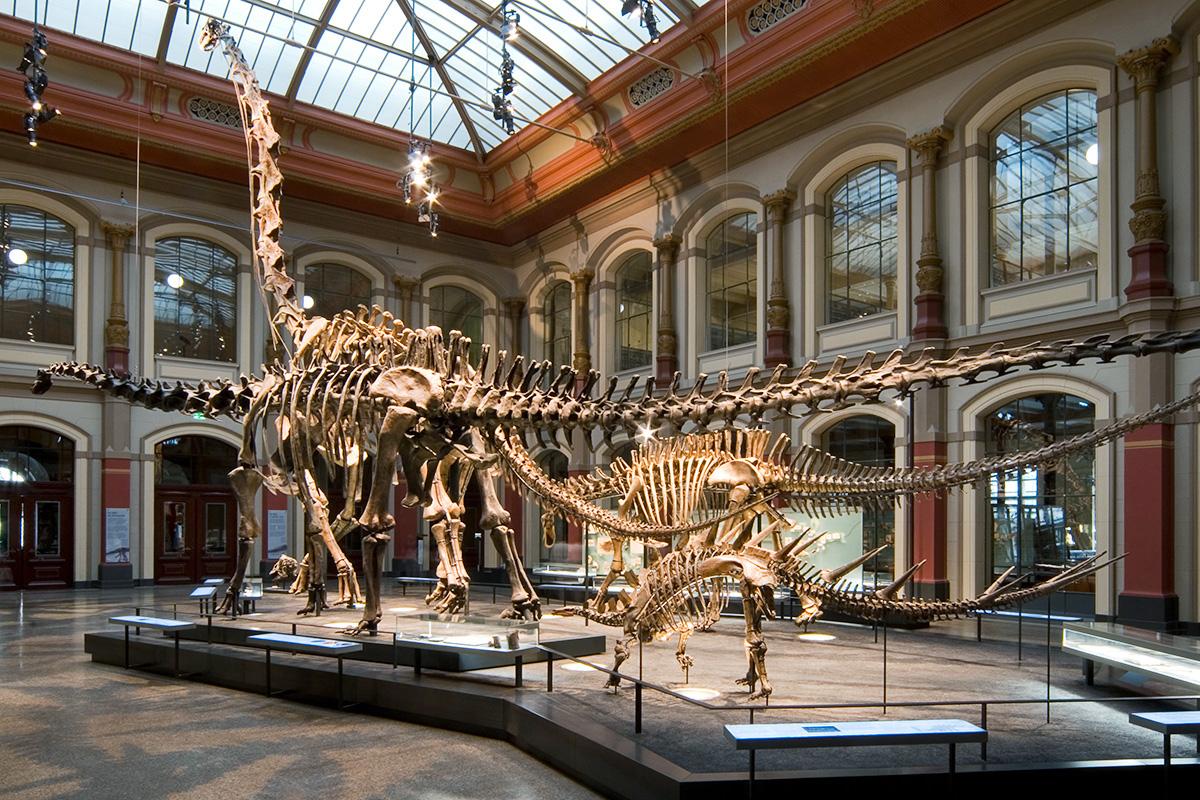 The research alliance Dinosaurier in Berlin. Brachiosaurus brancai als wissenschaftliche, politische und kulturelle Ikone, 1906-2016 (Dinosaurs in Berlin. Brachiosaurus brancai as an icon in scientific, political and cultural terms) funded by the Ministry for Education and Research, has been revisiting the excavation of specimens and their history during a palaeontological expedition in what was then the German colony of East Africa. The results give an insight into the colonial purchasing practices of natural history collections and focus on the particular context of the famous Tendaguru expedition. The Museum für Naturkunde Berlin is one of the few museums that face up to their colonial past, as reflected in their exhibits. The research results will be published in 2018 and help to shape the exhibition.

From 1909 to 1913, the former German colony of East Africa saw one of the most important palaeontological expeditions of all time at Tendaguru Hill. It was led by palaeontologists of the Berlin Museum für Naturkunde and mainly funded by donations. It yielded 230 tonnes of fossil material, including the skeleton of Brachiosaurus brancai that has been on display in the Museum’s atrium since 1937.

The findings of the research alliance highlight the context in which the fossils were acquired. In March 1908, the Tendaguru site was declared abandoned territory by the colonial administration. The crown took possession of the site and it became crown land. Such crown land declarations were part of the economic exploitation of the colony. For the local population, it meant effectively that they were dispossessed and dispelled. At Tendaguru, this served two purposes. Firstly, the African population was to be kept away from the excavation site and secondly, a permanent property right to the fossils was established for the German empire, as well as exclusive access to the excavation site of the Berlin expedition. By taking possession of the area, the German colonial state became the proprietor of the fossils buried in the ground. In addition, a ban on exports of fossils from German East Africa was introduced in 1911 to stifle all foreign competition.

The circumstances of the acquisition of the dinosaur fossils show how closely the Imperial Colonial Office in Berlin, the colonial administration in East Africa and the Museum für Naturkunde collaborated. The process of transferring dinosaur fossils from the soil of East Africa to the property of the Berlin Museum für Naturkunde was entirely legal according to the existing legislation of the German Empire and the German colony of East Africa. However, concepts of indigenous legislation, property and land ownership and the significance of the fossils for the local population were not considered at all. It could be said that Germany as a colonial power in East Africa prepared the ground for the recovery and acquisition of the dinosaur fossils. They demonstrate the intricate link between the Museum’s collection and German colonialism. In future, this historical background will be clearly outlined in the exhibition of the Museum and examples given.

The research alliance Dinosaurier in Berlin. Brachiosaurus brancai als wissenschaftliche, politische und kulturelle Ikone, 1906-2016 is a collaboration between the cultural research unit PAN – Perspektiven auf Natur (Perspectives on Nature) at the Museum für Naturkunde Berlin, the Department of Art History of the Modern Age at the Technische Universität Berlin (Prof. Dr. Bénédicte Savoy) and the Seminardes Seminars für Afrikawissenschaften (Institute for African Research) (Prof. Dr. Andreas Eckert) at the Humboldt-Universität Berlin. The research results will be published in 2018.