The rise and fall of elephants 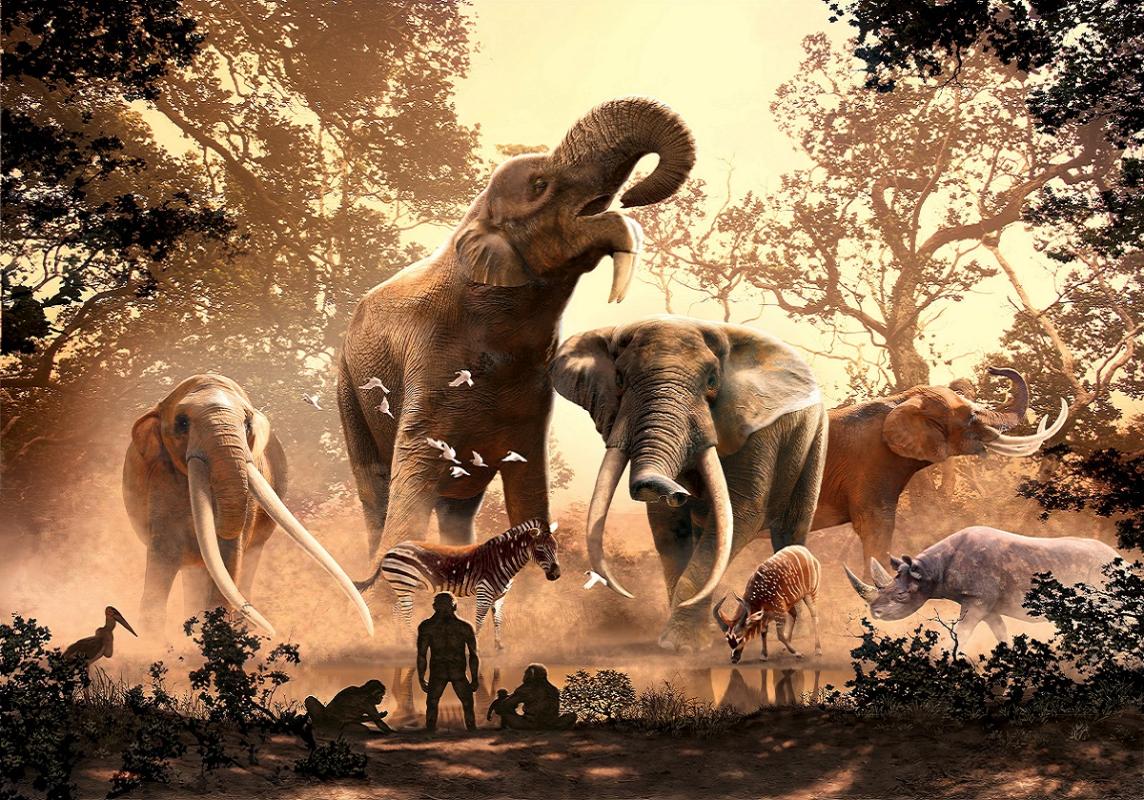 Earth-historical events such as ice ages or the shifting of continental plates are mainly responsible for the evolutionary success of proboscideans, but also for their decline. This is the main conclusion of a study published this week in Nature Ecology & Evolution by an international research team from Spain, Finland, Great Britain, Germany and Argentina with the participation of the Museum für Naturkunde Berlin.

Based on fossil finds, we know that the vast majority of species that once inhabited the earth have become extinct. For example, there are about 5,500 mammal species living on the planet today, but we know of at least 160,000 fossil species, so for every mammal species living today, there are at least 30 extinct ones. We therefore know with great certainty that the lineages of living things come and go along immense time scales. But what factors cause these lineages to come into being and disappear is still an unsolved question.

To investigate this problem more closely, the research team focused on a charismatic group: the proboscideans, which include today's elephants, but also the extinct mammoths, mastodons and dinotheria. The history of the proboscideans is one of glory and decline. Although today there are only three species of elephants left in Asia and Africa, we know fossil more than 180 species of these animals, which also inhabited Europe, South America and North America. "In the past, more than 30 species of these giants lived on the planet at the same time, and many ecosystems were so productive and ecologically complex that it was not uncommon for three or more species of proboscideans to live together in the same ecosystem," explains Juan López Cantalapiedra, a researcher at the University of Alcalá in Spain and lead author of the new study.

However, as the researchers were able to show, proboscideans were not always so diverse. In the first 30 million years of their history, the group was limited to Africa and Arabia, which together formed an isolated continent that was not connected to Asia as it is today. Until then, the evolution of these animals was quite slow and the few existing species were ecologically quite similar. But about 22 million years ago, Afro-Arabia connected with Eurasia and the proboscideans spread all over the world. The new challenges faced by the lineages scattered outside Afro-Arabia caused the ecology of the group to multiply. Species emerged with different, highly diverse tooth shapes, including strange, shovel-shaped tusks. "This ecological diversity reduced competition between species and allowed several of them to live together in the same ecosystem at the same time," points out Fernando Blanco, a researcher at the Museum für Naturkunde Berlin. This marked the beginning of the golden age of proboscideans. "If the link between Afro-Arabia and Eurasia had not happened, or had happened at a different time, the evolutionary history of proboscideans would have been radically different," Blanco adds.

The new study also revealed the factors that determined the group's ultimate decline. Seven million years ago, modern savannah ecosystems spread across all continents, and because of this change, many proboscideans adapted to life in forested areas disappeared. At the same time, however, new forms appeared that were able to feed on less nutritious plant material such as wood and especially grass, which is typical of savannas. Today's elephants are among these evolutionary newcomers.

About 3 million years ago, the rules of the game changed again with the onset of the ice ages. In Eurasia and Africa, the extinction rate quintupled. But as the researchers were able to show, the extinction rate rose even further in Eurasia and America 160,000 and 75,000 years ago, respectively. Were humans responsible for this debacle? "At that time, Homo sapiens had not yet made it to these continents," Cantalapiedra explains. The analyses showed that the different phases of extinction were linked to the decline and rapid fluctuations in global temperatures as a result of the ice ages. "The impact of our ancestors probably contributed to the extinction of the few surviving species, such as the woolly mammoth, a little later."

The photos may be used free of charge for reporting purposes in connection with the press invitation, provided the copyright is mentioned.

1. An example of the enormous variety of forms that the proboscideans achieved, including their different tusk types. From left to right, the species are arranged from geologically old to young. Illustration by Oscar Sanisidro.

2. About 4 million years ago, an Australopithecus anamensis observed the richness of proboscideans in what is now Turkana, Kenya.  From left to right Anancus ultimus, Deinotherium bozasi, Loxodonta adaurora and Loxodonta exoptata.  Illustration by Julius Csotonyi.