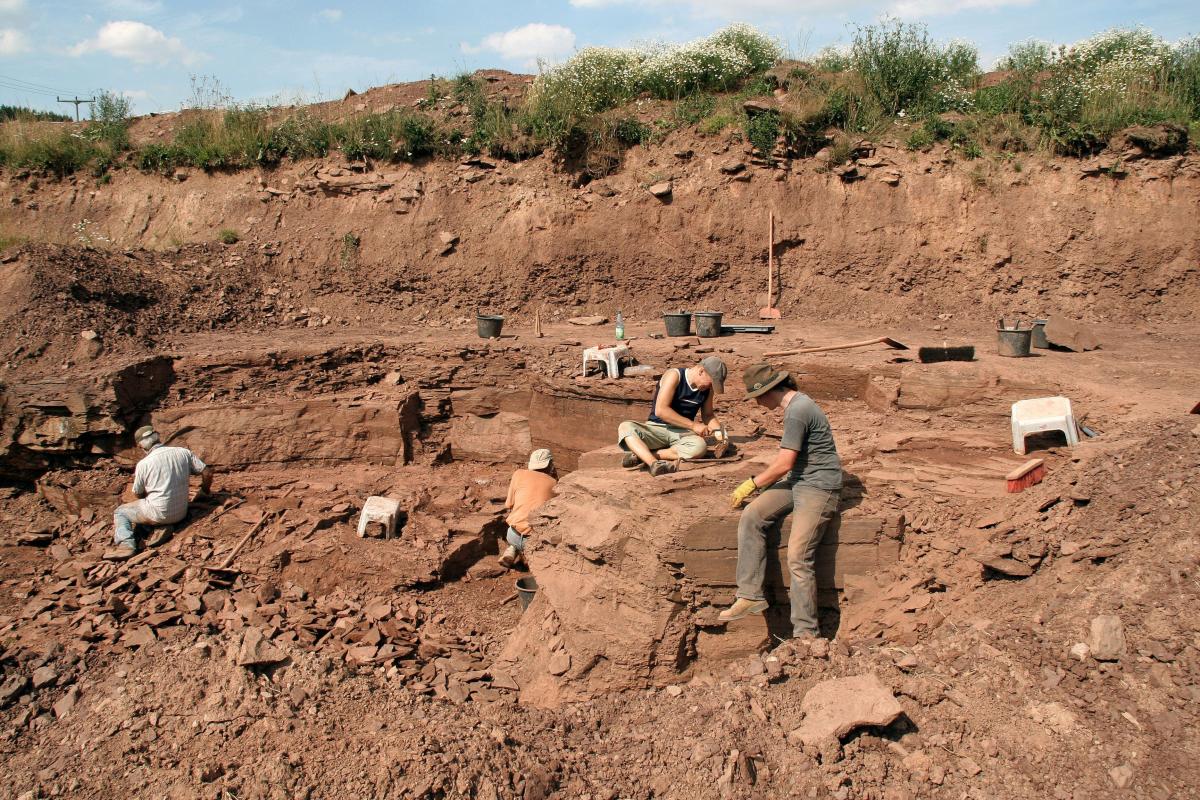 An interdisciplinary research team starts a unique project with palaeontological excavation with the fossil deposit Bromacker in the Thuringian Forest, Germany. The aim is to gain detailed insights into the palaeobiology of early land vertebrates and their habitats. At the same time, citizens can look over the shoulders of researchers working on the BROMACKER project.

In August 2020, the BROMACKER project will launch a new type of scientific cooperation at the unique fossil site Bromacker in the heart of Germany, in the Thuringian Forest. For the first time in more than a decade, systematic excavations and geological drillings are taking place there. But that's not all: The goal of the cooperation is to use the Bromacker fossil deposit to interconnect research and knowledge transfer in such a way that the public is provided with a window on the early evolution of vertebrates on land.

Over the next five years, the Museum für Naturkunde Berlin – Leibniz Institute for Evolution and Biodiversity Research, the Stiftung Schloss Friedenstein Gotha, the Friedrich Schiller University Jena and the UNESCO Global Geopark Thuringia Inselsberg – Drei Gleichen will be working together to achieve this goal. This research project, which is unique in Germany, is funded by the Federal Ministry of Education and Research.

Researchers will pursue geological, taxonomic, palaeoecological and physiological questions in order to in the future better understand life at the Bromacker fossil site as a whole. With new ways of science communication, the public will participate in research and enter into dialogue with researchers. For example, in addition to a Bromacker Lab, there will be digital media and guided tours of the excavation site as well as insights into live preparation and live CT scanning of fossils. In the course of the project, it is planned that citizen scientists will have the opportunity to participate in research tasks.

"Research is more exciting than any blockbuster. We open up research and establish contact with researchers: not only when the research is finished, but already during the first excavation. The Bromacker site is an immeasurable treasure of millions of years old, early land vertebrates, which is now finally being brought out of its Sleeping Beauty slumber for the general public," says Johannes Vogel, Director General at the Museum für Naturkunde Berlin. "As a research museum, we are pushing the opening up of science further with our future plan and want to learn from people. Please support us, join us."

"The Bromacker site is unique in the world in terms of first-class preserved three-dimensional vertebrate fossils and an extraordinarily large diversity of species in the early Permian, about 290 million years ago. The excavations and state-of-the-art research approaches will provide valuable insights into the palaeobiology and ecology of early terrestrial vertebrates and their environment," says Jörg Fröbisch, Professor of Palaeobiology and Evolution and Project Manager (MfN). "We want to find out how the evolution of stable ecosystems works. Of particular interest is the evolution of the earliest herbivores and the subsequent evolution of the trophic pyramid with many herbivores at the base and few top predators, i.e. carnivores, at the top."

"Our aim is to reconstruct the habitat of these reptiles and their food as well as the prevailing climate in this area, which is characterised by rivers, swamps and lakes, in three dimensions," says Christoph Heubeck from the Friedrich Schiller University Jena. "Geological studies by our staff and students at the numerous outcrops in the area, detailed mapping, several shallow drillings in the vicinity of the fossil-bearing quarries and a deep geological drilling in the centre of the sedimentary basin will contribute to this. We also intend to present the results in a three-dimensional, interactive computer model". 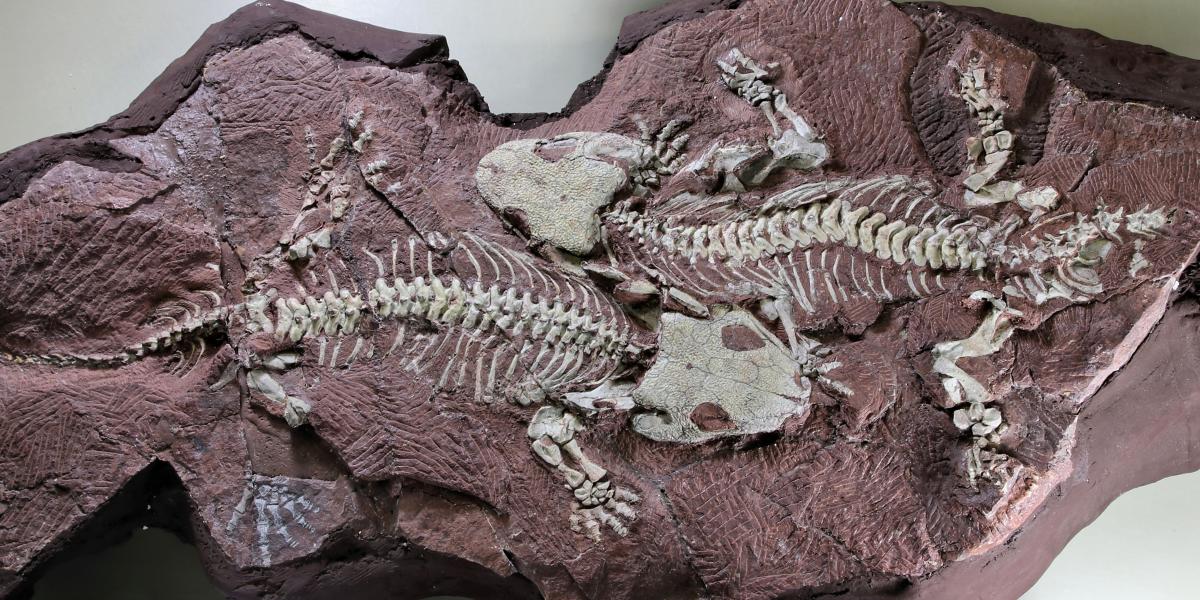 Science communication of the future

"For the first time, this project combines the research fields of natural science and knowledge transfer on an equal footing. BROMACKER has the potential to become an exemplary approach both nationally and internationally: For more dialogue about research," says Tobias Pfeifer-Helke, Director of the Stiftung Schloss Friedenstein Gotha, whose collections include the fossils of the twelve species of land vertebrates discovered in the fossil site to date.

"Directly in the Thuringian excavation site, a visitor platform is planned from which the public can follow the work of the paleontologists during events and guided tours and get an authentic view of the jobs in one of the world's most important fossil sites," says Syliva Reyer-Rohde, head of the management office of the UNESCO Global Geopark Thuringia Inselsberg – Drei Gleichen.

"In recent years, the Museum für Naturkunde Berlin has successfully experimented with many open formats of science communication. This experience is used here as a basis for the development of innovative offers for citizens. For example, the preparation of the finds in Berlin is made visible live to the public. However, we not only want to provide new insights and experiences for the public, we also want to show through the participating scientists that highly complex research and certain forms of science communication can be combined," says Uwe Moldrzyk, Head of Exhibition Development, MfN.

About the Bromacker excavation site

Although Germany is not a large territorial state, it is characterized by its complex and varied geology and thus houses some of the world's most famous fossil sites from various geological eras. The fossil deposit Bromacker in the early Permian Tambach Formation between the communities of Tambach-Dietharz and Georgenthal in the Thuringian Forest has been known for more than 100 years. Outside of the USA, it represents one of the most important and productive fossil deposits for terrestrial tetrapods from the early Permian period, dating back some 290 million years ago. In the late 19th century, researchers first found footprints and burrowing traces.

Thomas Martens, a palaeontologist from the Museum der Natur in Gotha, first found bones in 1974. After German reunification, he, together with David Berman and Amy Henrici from the Carnegie Museum in Pittsburgh and Stuart S. Sumida from California State University, San Bernardino, carried out annual excavations from 1993 to 2010, which yielded numerous skeletons, some of them complete, in a state of preservation that is unique in Europe.

The importance of the Bromacker fossil site for documenting the early evolution of vertebrates on land is comparable in its significance to other outstanding sites in Germany, such as the Messel Pit UNESCO World Natural Heritage Site and the world-famous sites in Holzmaden and Solnhofen. 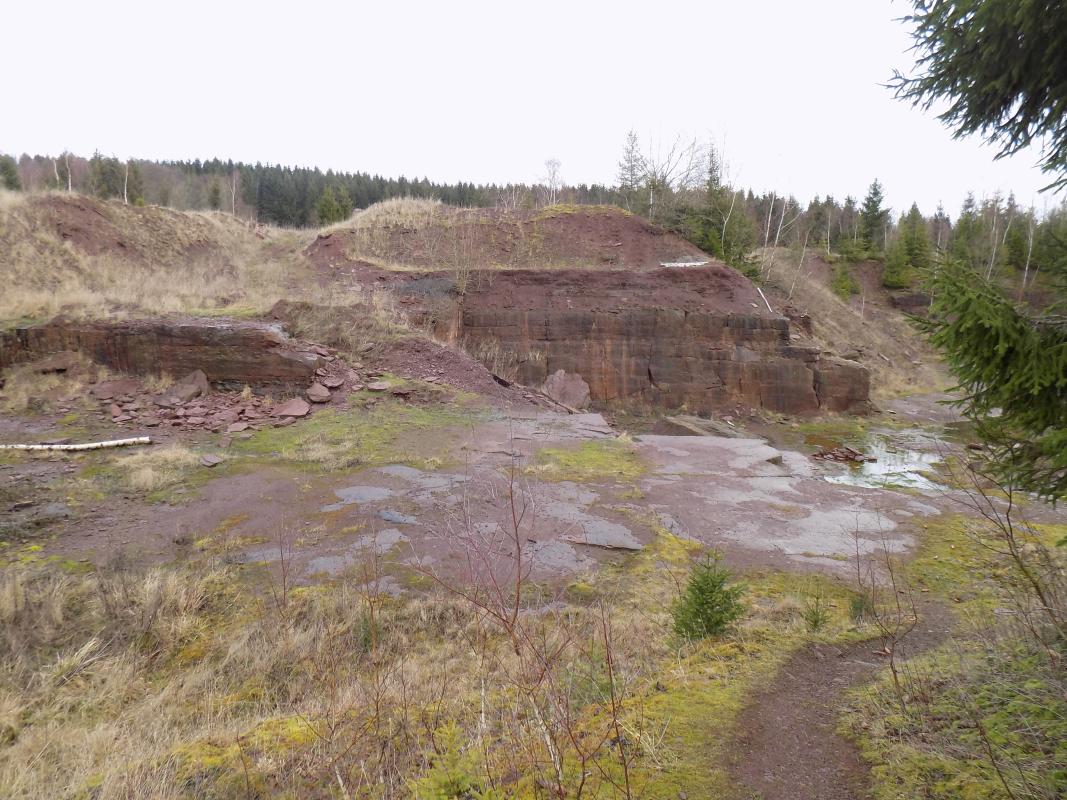 Research at a glance

Biomechanics
Functional morphological studies with the help of the most modern 3D image technologies (computer tomography, 3D laser scanning, photogrammetry, finite element analysis) on the basis of body fossils as well as on the basis of the associated trace fossils (tracks of the living world of that time)

Geology and climate
Sedimentological-geological investigations of the different fossiliferous horizons in the Tambach Formation by means of outcrops as well as deep drilling with geochemical analyses (isotopes) in order to obtain new knowledge about paleoclimate, depositional space and taphonomy
Knowledge transfer and science communication
New and innovative communication and participation formats, communication measures optimised for specific target groups, digital exhibition

Pictures for free use in connection with this press release can be found here.