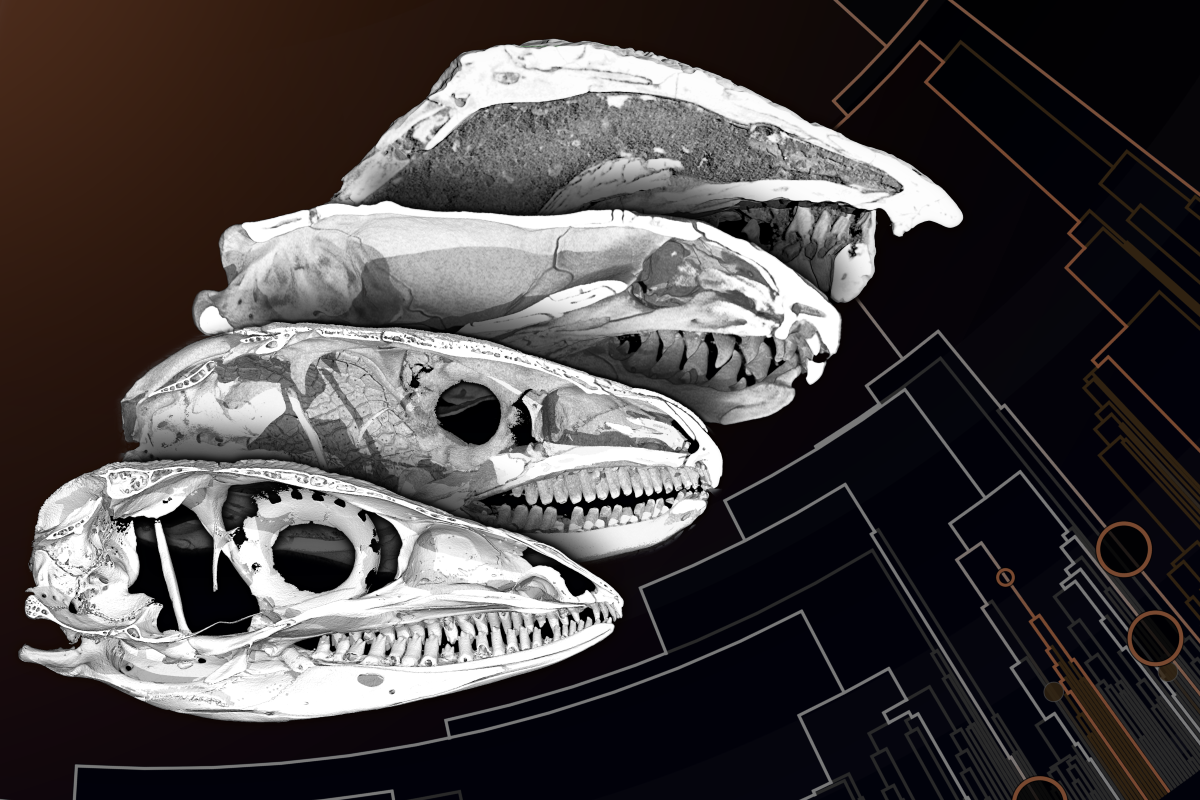 Ebel and colleagues, an international research team at the Museum für Naturkunde Berlin, investigated the skull roof in reptiles using computer tomography (CT). Most of the examined specimens belong to the museum's research collection. The study was published in the scientific journal BMC Biology and reveals a hitherto unknown case of convergent evolution. In this process, very similar body structures evolve from very different ancestors, such as the wings of birds, bats and insects. The study is accompanied by publicly accessible data and provides novel insights into the lifestyle of extinct species.

Why are terrestrial vertebrates so highly diverse? In times of anthropogenic change and mass extinctions, this key question to evolutionary research is more relevant than ever. In the animal kingdom, the evolution of varied forms is often attributed to modifications in accordance with different environments and lifestyles. "However, we were not around when, millions of years ago, historic key events determined the destinies of entire evolutionary lineages. Therefore, 160 years after Darwin's theory of evolution, our understanding of certain mechanisms is still incomplete", explains Roy Ebel, first author of the paper and evolutionary biologist at the Museum für Naturkunde Berlin.

In order to better understand the complex interrelations between lifestyle, form, and evolution of vertebrates, Ebel and colleagues looked into the skull roof structure of squamate reptiles – i.e., lizards and snakes. Most of the studied specimens came from the research collection of the Museum für Naturkunde Berlin. "We wanted to understand to what extent their bone structure reflects certain lifestyles", says Ebel. Many of these reptiles use their skulls as a digging tool. Nonetheless, this question has never been systematically investigated. In their study, Ebel and colleagues therefore used complex simulations to reconstruct the evolution of a specialised burrowing lifestyle over a period of 240 million years. "To our astonishment, we found that burrowing evolved independently in 54 lizard and snake lineages", says Ebel. "These reptiles are therefore particularly well suited as a model system for the study of convergent evolution."

In the second phase of their study, Ebel and colleagues compared the skull roof structure of lizards and snakes in accordance with their lifestyles. To this end, they made use of high-resolution micro-CT scans for the 3D visualisation of bone tissue. Employing a new, effective protocol, all measurements and analyses of the digital 3D volumes were carried out at the CT-lab of the Museum für Naturkunde Berlin. A large sample size has allowed the drawing of conclusions about the entire squamate reptilian clade with over 11,000 species. "For burrowing lizards and snakes, we can now say that they have repeatedly evolved a particularly dense and compact skull in independent evolutionary processes", Ebel summarises the results. In their study, the scientists also identified typical proportions of both the skull and between the skull roof bones as convergently evolved modifications associated with lifestyle.

With their findings, Ebel and colleagues have discovered a novel case of convergent evolution: very similar structures have evolved as a response to a common lifestyle in different lineages. Such independently evolved similarities reflect a certain function, in this case burrowing, and can therefore not be used to reconstruct species' evolutionary relationships. "Nonetheless – or precisely therefore", says Ebel "the knowledge of these processes is of outstanding importance. By means of skull roof structure, we can now look into prehistoric times and reconstruct the lifestyle of reptiles that became extinct many millions of years ago. Our findings thus cast completely new light on the evolutionary history of certain lineages". This is especially true for snakes, whose origin has been the subject of controversial debate for decades. Having said this, the study of Ebel and colleagues may also have important implications beyond squamate reptiles. A burrowing lifestyle has likely played a key role in the evolutionary history of turtles and certain amphibians. In this context, Ebel explains: "Current studies even suggest that our own ancestors, i.e. the mammalian stem lineage, would not have survived the largest mass extinction in earth's history at the end of the Permian about 250 million years ago, if they had not adopted a burrowing lifestyle. It is therefore of inestimable value to understand such historical lifestyle transitions."

All CT-scans will be made accessible upon the publication of the paper via the Data Repository of the Museum für Naturkunde Berlin. They will thus be available to researchers worldwide.

Picture for free in relation to that press release: