Of the advantages of being thick skulled: the story of aquatic sloths 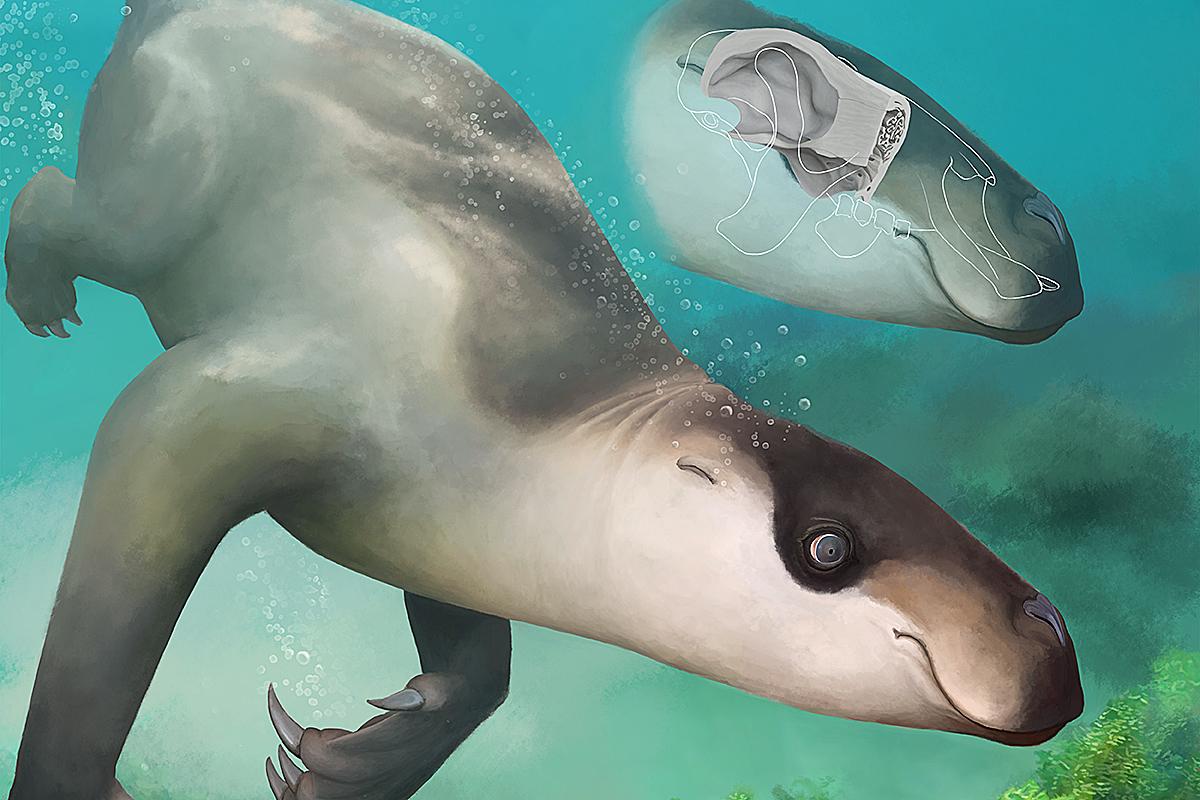 Sloths are mammals today represented by a few tree-dwelling species of small size, restricted to central Latin America. However, their extinct relatives were much more diverse, including for instance the elephant-sized “ground sloth” Megatherium, and even an aquatic lineage, the genus Thalassocnus. Interpreted as marine shallow-diving animals, these sloths of roughly the size of a large pig were roaming the Pacific coast of central South America 8-4 million years ago. Researchers from the Museum für Naturkunde Berlin and Muséum national d’Histoire naturelle of Paris recently discovered something unique about the bones of these the animals: their whole skeleton was extremely dense. Such an adaptation is well-known in the limb bones and ribs of shallow-diving aquatic tetrapods (limbed vertebrates), such as manatees. But, in Thalassocnus, even some skull bones were thickened and dense. The turbinates, usually paper-thin bones found in the nasal cavity of terrestrial mammals, are found in these aquatic sloths as drastically thickened. This anatomical feature, not known in any other animal, challenges our understanding of evolutionary transitions to an aquatic lifestyle.

The fauna of the West coast of the central South America should have been a sight to behold during the Miocene and up to the beginning of the Pleistocene (~23-4 million years ago). Indeed, one could encounter extremely strange animals roaming the shore, among them, the aquatic sloth Thalassocnus. The geological Formation of Pisco (Peru) yielded dozens of skeletons of this mammal, represented by five species that thrived ~8-4 million years ago. Scientists were already surprised to find, a few years ago, that the limb bones and ribs of these sloths were indicative of a shallow-diving lifestyle: some of the inner cavities of these bones were partly filled with bony tissue, making them denser. In their terrestrial close relatives, the “ground sloths”, the bone are more porous, and hence lighter. Now, researchers used high-resolution computed tomography (µCT) to reveal the inner structure of the skull of these aquatic sloths. And what they found was beyond their expectations.

The skull of most terrestrial mammals, as extant sloths for instance, is formed by rather thin walls, and encloses empty spaces termed sinuses. In the aquatic sloths, the skull walls are thickened, and sinuses partly filled with dense bone. Furthermore, in most terrestrial mammals, the nasal cavity encloses the turbinates (or nasal conchae), thin scrolls of bone of which the sole purpose is to bear the nasal mucosa (permitting exchanges between breathed air and blood flow). It was therefore highly unexpected to find that even these bones were dramatically thickened in the nasal cavity of Thalassocnus. The thickened turbinates appear to have conferred little or no advantage. To explain such an odd feature, the authors have suggested that a systemic acquisition (affecting the whole skeleton structure) of bone mass increase might have been involved in the adaptation of these sloths to the marine environment.

Free pictures you will get here: