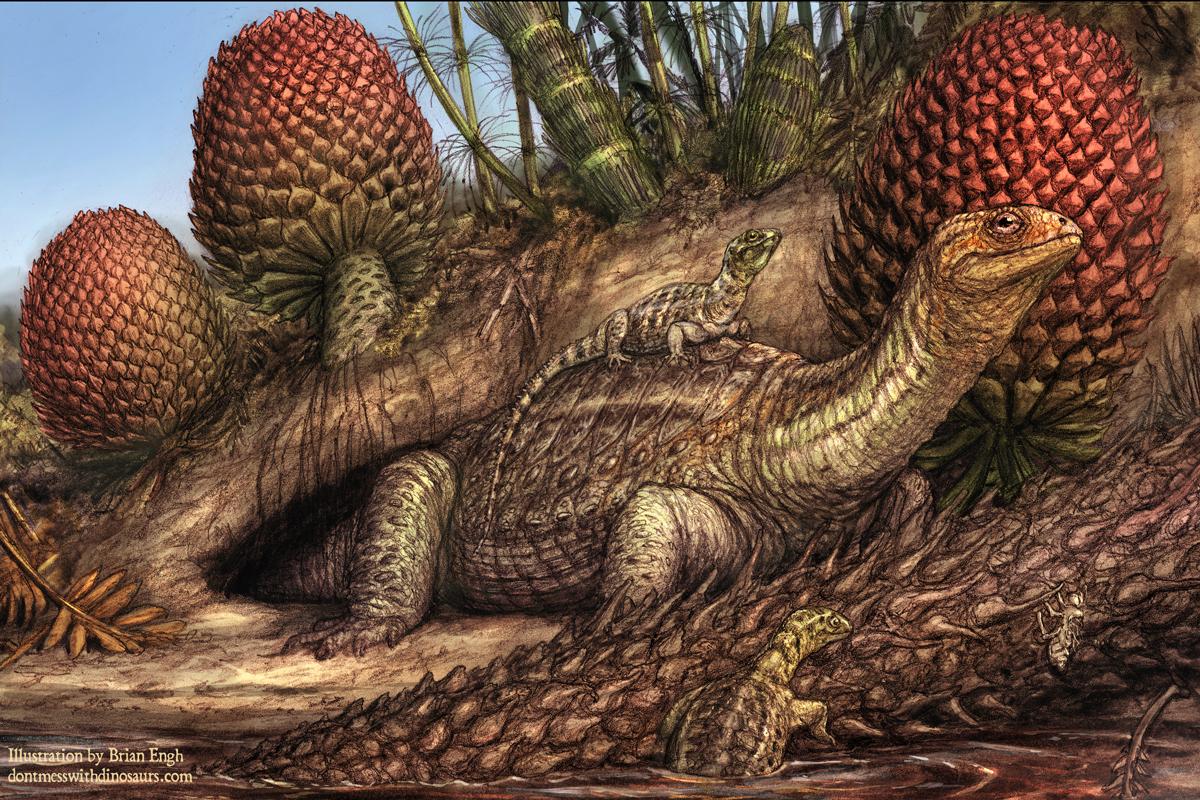 In a collaborative effort, palaeontologists and physicians from Germany, Canada, and the US worked together at diagnosing a pathology in a 240-million-year-old specimen of Pappochelys rosinae, the oldest known stem-turtle from the Triassic time period. “Morphological inspection and micro-CT studies of the pathological bone revealed that it suffered from bone cancer”, explains Yara Haridy from the Museum für Naturkunde Berlin, lead author of this study. “This in one of the oldest cases of cancer in the fossil record of vertebrates, and the oldest case in an amniote, which is the group that encompasses reptiles, birds and mammals”, says Florian Witzmann, co-author and Haridy’s colleague at the museum in Berlin. The palaeopathological study was published in the prestigious Journal of the American Medical Association Oncology (JAMA Oncology). Palaeopathology is the study of ancient diseases and malformations, and this branch of science is used to understand how diseases, pathogens and healing evolved. It is a young science that is based on interdisciplinary collaboration between palaeontologists and physicians. “Generally, paleopathologies are rare in fossils, particularly malignant cancers which are almost unheard of in the fossil record, making this a rare find indeed” says co-author Patrick Asbach, radiologist at the Charité Hospital - Universitätsmedizin Berlin.

The stem-turtle, Pappochelys rosinae was discovered at the Schumann Quarry in Vellberg-Eschenau, southwestern Germany and made headlines in 2015 as an important piece of the turtle evolution puzzle. The pathological Pappochelys specimen is stored in the fossil vertebrate collection of the Staatliches Museum für Naturkunde Stuttgart. “The question of the origin of turtles and their specialized body plan has puzzled scientists for a long time”, explains co-author Rainer Schoch from the Staatliches Museum für Naturkunde Stuttgart and one of the discoverers of this important fossil animal, “Pappochelys nests at the base of the grade towards modern turtles, followed by the successively more turtle-like taxa.” Furthermore, Pappochelys has yet to evolve a turtle shell, giving scientists a clue as to how that evolution occurred. In this study the scientific team worked on an isolated femur of this shell-less turtle which peaked their interest due to a mysterious growth on it. With assistance from Kristin Mahlow, scientific assistant of the Micro CT lab at the Museum für Naturkunde Berlin, the growth was diagnosed as a periosteal osteosarcoma, a particular type of malignant bone cancer.

Cancer is generally defined as the unregulated division of abnormal cells, this applies to soft tissue tumors, as well as hard tissues such as teeth and bone. “Naturally, in the fossil record most soft tissue does not preserve and therefore paleontologists are limited to hard tissue pathologies”, says co-author and palaeopathologist Bruce Rothschild from the Carnegie Museum in Pittsburgh and the Indiana University Ball Memorial Hospital in Muncie, Indiana. From fossil pathologies scientists can tell when certain traits appeared in vertebrate history, in this instance the presence of uncontrolled cell growth (i.e cancer) tells us that there is usually a cell growth regulator in place that keeps cell growth in check. “In this stem-turtle’s case this gene has likely been mutated causing a malfunction, in humans these are called tumor suppressor genes and they are a hot topic of medical research”, says co-author Nadia Fröbisch from the Museum für Naturkunde Berlin. Unfortunately, it is impossible to know if this ancient turtle ancestor had the same cancer-causing genes as humans do, nor is it possible to know if this cancer proved fatal for this animal. “Our finding provides further evidence that cancer is not restricted to the modern human physiology. Instead, the susceptibility to this disease roots far back in the evolutionary history of vertebrates, hundreds of millions of years before the origin of humans” concludes Yara Haridy.

To read the whole publication follow this link: Not available until the 5th of February

You can get the photos here:

The photos can be used free of charge as coverage in correlation with press release.

Image 1: A life reconstruction of the 240-million-year-old shell less turtle ancestor Pappochelys rosinae, living at the edge of a lake.
Credit: Brian Engh/dontmesswithdinosaurs.com

Image 3: Picture of the fossil legbone showing a large tumor. The micro CT cut away shows the internal structure of the bone that allowed scientists to diagnose the specimen.
Credit: Yara Haridy/Florian Witzmann