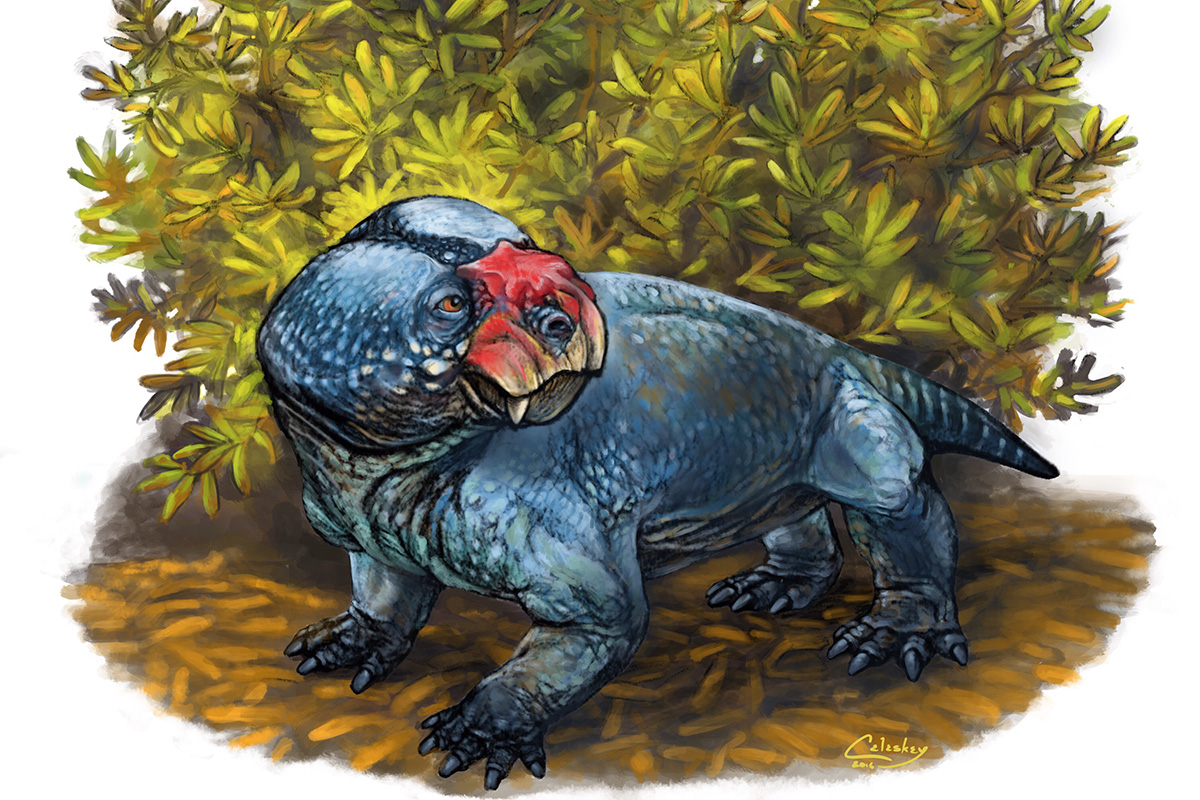 Fossil skulls with massive tusks representing a new species of extinct herbivore have been described by a team of researchers from the Museum für Naturkunde Berlin, Iziko Museums of South Africa, and the University of the Witwatersrand in Johannesburg. The new species, Bulbasaurus phylloxyron, fills an important gap in the fossil record of early relatives of mammals.

Bulbasaurus is a member of a group of extinct animals called dicynodonts. “Dicynodonts are very strange-looking animals, with a turtle-like beak, tusks, and a stocky body sort of like a pig. There is nothing alive today quite like them, but they were the most successful herbivores of their time” said lead author Dr. Christian Kammerer of the Museum für Naturkunde Berlin. Dicynodonts appeared before the dinosaurs and were most common in the Permian Period, 260 million years ago. Despite a somewhat “reptilian” appearance, they are actually ancient relatives of mammals. “Weird as it may seem, these animals are much more closely related to you and me than any actual turtle or dinosaur” said Dr. Kammerer.

The specimens of Bulbasaurus were initially discovered and collected by study co-author Dr. Roger Smith of the Iziko Museums of South Africa and University of the Witwatersrand. While visiting South African museum collections, Dr. Kammerer recognized that these specimens represented a new species based on the relatively large size of their tusks. “I knew that these skulls couldn’t be from one of the usual species of that age, because their tusks were huge compared to other, co-existing dicynodonts.” Bulbasaurus was a fairly small, roughly dog-sized animal, but had proportionally massive tusks for its size, comparable to those of the largest known dicynodonts. Indeed, Bulbasaurus exhibits many features of the skull previously known only in later, giant relatives. This indicates that these features first evolved at small size and were retained in giant descendants, rather than being adaptations for large body size.

The new species is most important because it resolves a problematic gap in the fossil record. Bulbasaurus is a member of the geikiid family of dicynodonts, a group that includes some of the most abundant and widespread species in later Permian rocks. The absence of geikiid dicynodonts in earlier strata has long been a mystery. Based on the records of other dicynodont groups, geikiids must have evolved early in dicynodont history, but paleontologists had never found geikiid fossils from those earlier deposits. This problem is known as a “ghost lineage”, where scientists know that a group of organisms must have been present at a certain time, but no fossils of that age have been found. Resolution of the geikiid ghost lineage required a combination of intense field effort and detailed study of museum specimens. “That specimens of a rare species like this were collected at all is a testament to the exhaustive, multi-decade field program of Roger Smith” said Dr. Kammerer. As for why specimens of Bulbasaurus in museum collections were not previously recognized as being early geikiids, he remarked, “Dicynodont skulls tend to look a lot alike, so if you are not a specialist in the group it is easy to overlook species-specific differences between specimens. I am sure that the solutions for a lot of gaps in the fossil record are already sitting in museums waiting to be studied, it just takes time and researcher expertise.”

CAPTION FOR ILLUSTRATION: Reconstruction of what Bulbasaurus may have looked like while alive. Art by Matt Celeskey.