A penis in amber 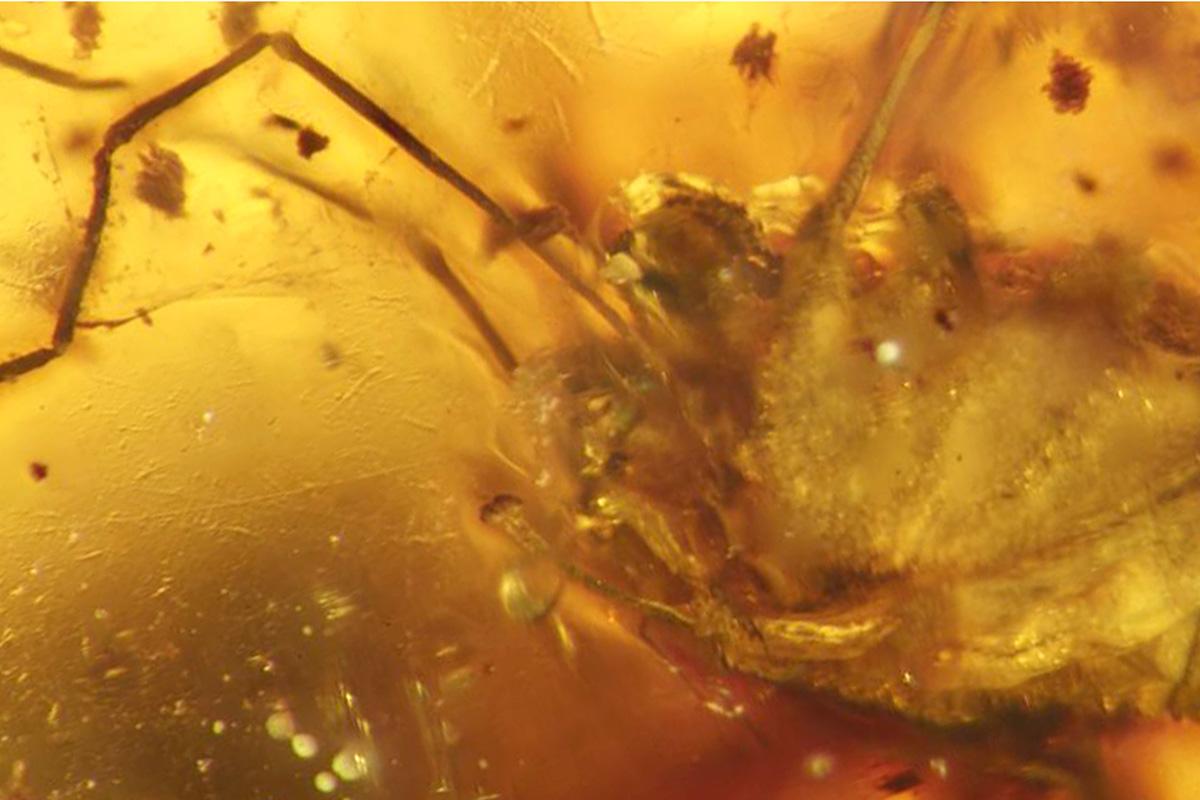 A research team led by Jason Dunlop from the Museum für Naturkunde Berlin published in the international journal The Science of Nature the unusual discovery of a 99 million year old harvestman with an extended penis. Male harvestmen transfer sperm directly into the female. In modern animals the fine structure of this penis is extremely important for identifying and placing the different species. The new fossil discovery shows that harvestmen in the Cretaceous mated in the same way as animals today. Based on the large eyes and spatula-like penis tip, the scientists were also able to describe the fossil in a new, extinct family.

Harvestmen (Opiliones) are a diverse group of arachnids with more than 6,600 described species. Only a few fossil species (38) are known, among them Halitherses grimaldii from the ca. 99 million year old Burmese amber from Myanmar in South-east Asia. This species was first discovered in 2005, but proved to be difficult to place in the harvestman family tree. An international research team led by Jason Dunlop from the Museum für Naturkunde Berlin discovered a new example of this species which proved to be particularly important in that – for the first time – the male genitalia (the penis) is clearly visible.

Normally this male organ is hidden within the body when not in use. By chance, in this extraordinary amber fossil the penis is preserved fully extended outside the body. It shows that Cretaceous harvestmen also used a penis to transfer sperm directly into the female’s body. In the taxonomy of modern harvestmen penis anatomy is extremely important: each species has its own unique structure. Also the major groups (or families) of the harvestmen have different penis forms. So far only a few fossil harvestmen have revealed their penis, which makes it difficult to compare them effectively with living species.

In Halitherses grimaldii the penis is spatula-shaped at the tip and is heart-shaped in outline, with a small tube extending from the very end. No living harvestman has a penis with exactly this shape. Also unusual are the large eyes of the fossil, although new results suggest that such large eyes are probably a primitive character in these harvestmen. In other words some early harvestmen should have had large eyes. This combination of features enabled the scientists to propose a new (extinct) family, Halithersidae, within the suborder Dyspnoi. This is the first time that a fossil family has been defined using a mixture of features relating to both the body and the genitalia, and allowed the researchers to study the relationships of these ancient fossils using the same approaches that they would use for living species.

This download link will give you access to photos and texts that you will be permitted to use free of charge in connection with reporting on this press release. If you do not yet have the log in information, please contact Gesine Steiner.

Please note that the image rights for the photographs are granted to the press free of charge. Any other use – including commercial use - of the images is not permitted. We would ask you for an accurate quote in relation to the exhibition (©), and we would greatly appreciate a free-of-charge sample copy of the publication for both the Museum für Naturkunde Berlin and the proprietor of the image rights.