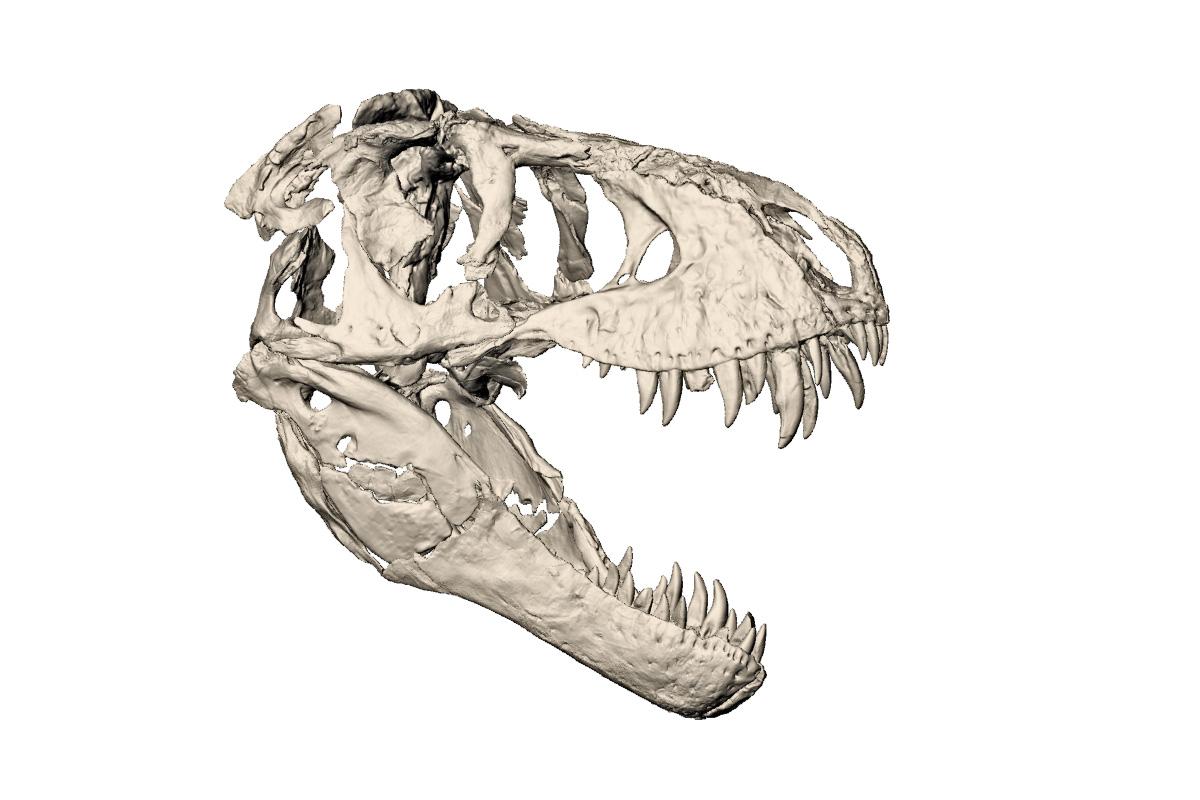 At the Museum für Naturkunde, Tristan Otto’s skeleton will be studied by a specialised team of researchers over the coming years, using cutting-edge technology and working in close collaboration with partners in science and research, industry and society.

Research around Tristan Otto began with the arrival of the original skull at the Museum für Naturkunde Berlin. In mid-July, a team of scientists travelled to Montana to carry out further excavations at the site where T. rex was found. The team’s ambition was to collect more information about the environment in which this giant carnivore lived. Can essential trace fossils such as crabs, snails, or bivalves be detected? Are remains of other vertebrates such as tortoises or fish to be found? Have any plant remains been preserved? The deposits around the site must be measured and samples taken. Modern analytic methods, as they are used in the isotope lab at the Museum für Naturkunde Berlin, allow us to draw conclusions on climatic conditions around 66 million years ago. Over the running period of the research project, parts of a puzzle will be put together in order to create a picture of the world Tristan Otto lived in.

The team’s findings will gradually feed into the exhibition, in which even now, visitors are introduced to the most exciting scientific questions in five areas of research.

In the anatomy research area, Daniela Schwarz, vertebrate palaeontologist, is looking for answers to exciting questions such as: How old was Tristan Otto? What information do his bones contain? Did the skeleton have the hallmarks of modern lightweight build?

So far, 50 T. rex specimens have been discovered – none of them complete. Any further discovery will therefore help scientists to gain new insights. According to current knowledge, a T. rex skeleton should consist of 300 bones. Of Tristan Otto, 170 bones were found – which makes it one of the most complete specimens worldwide.

Many bones are more than just static elements – they change over a lifetime and can give clues, for example, regarding the age of the animal. Enlarged bumps on the bones in the upper skull region and larger muscle insertion points are typical signs of an adult T. rex.

Not only the completeness, but also the preservation status is crucial. Scientists hope that inside Tristan Otto’s bones, they will find preserved cavities. Some of them were canals for nerves. The size of the canals will be an indicator as to how large the nerve was, and thus, how well-developed certain senses such as the sense of smell were. Most of the cavities, however, are filled with air, known as pneumatisation, which helps reduce weight. This light-weight design is characteristic for modern birds – the descendants of Tyrannosaurus. How much of it can already be found in the skeleton of Tristan Otto and other members of the species, which had to be quick and nimble when hunting, despite their size and massive muscles? Using CT scans that give a view of the inside of the bones, scientists are looking into this question.

Oliver Hampe, palaeontologist, is looking at Tristan Otto’s life history in the palaeopathology research area. Did Tristan Otto suffer from diseases? What injuries did he sustain? And what killed him in the end?

Fossil bones have stories to tell if you know how to read them. A good deal of knowledge is required when it comes to decide whether certain anomalies are traces of disease the animal suffered from in its lifetime or transformations induced after death. The study of pathological findings enables scientists to draw conclusions about Tristan Otto’s individual life history. Furthermore, it can contribute to a better understanding of the evolution of diseases and disease patterns.

Tristan Otto‘s skeleton shows a number of pathological changes. Swellings at the left dentary indicate an infection or a tumour, whereas the opposite maxilla reveals dental anomalies – signs of different growth at the transition between crowns and roots. Both phenomena are probably linked together. One would imagine that an infection of the lower jaw was extremely painful, so it would be used as sparingly as possible.

In addition, the skeleton shows ossification of cartilage and neo-articulation, which indicates a mature age for this individual or a long-term restricted movement of a body region. Some ribs show thickenings – signs of healed fractures. These injuries Tristan Otto certainly survived.

In the research area of functional morphology, everything revolves around the study of Tristan Otto’s motion sequences and abilities. The skeleton is examined with a focus on specific functions: How did Tristan Otto hunt? How fast and agile was he? And how did the skull withstand the enormous bite forces? These are questions occupying Heinrich Mallison, palaeontologist at the Museum für Naturkunde Berlin.

Tyrannosaurs rex was one of the most dangerous land-living predators of all time, and scientists are still trying to find an answer to the question how it hunted. Opinions differ: scavenger, ambush predator or nimble speedy hunter? With the aid of skeletons, facts can be collected to support the various hypotheses.

Based on the position of muscle insertion points, the proportions of leg, hip and tail bones as well as the shapes of joints, locomotion can be simulated. How fast could Tyrannosaurus rex run? How nimble were these animals? Many experts think that T. rex changed its behaviour as it grew. Young and adolescent animals were quick and very agile and hunted smaller prey, whereas adults, due to their increased weight and changes in the lever arms of the limbs specialised on larger, more phlegmatic plant eaters. There are even indications that T. rex would eat members of their own species.

Tyrannosaurus rex was at the top of a food chain. Its bite force reached 50,000 Newton, i.e. each of its teeth was driven into its prey at a pressure of 5 tons. This strength is almost beyond belief – a tiger achieves 1,500 newton, and humans just about 1,000. The question is how the skull could withstand such pressure. Comparisons with birds and reptiles are helpful. Many of them have joints within their skull and can distribute forces by active motion. Did Tristan Otto’s skull have similar shock absorbers?

Palaeobotanist Barbara Mohr and her colleagues study the ecosystem in which Tristan Otto lives, looking at questions such as: What did Tristan Otto’s habitat look like? What was the climate like at the time? And what animals and plants existed?

In addition to detailed studies of the skeleton and the rocks in which it was found, other objects found in association can be used to reconstruct the habitat of this long extinct species. Even the smallest objects - spores, seed capsules, bone fragments and teeth - can provide important information. Together with additional data from modern stable isotope analyses, we can use this information to reconstruct the ecosystem.

Tristan Otto's bones come from the Hell Creek Formation, which extends across Montana, North and South Dakota in the northern Great Plains of the USA.  The oldest layers of rock in the Hell Creek are 67 million years old; the youngest are 65 million years old.  It is rich in dinosaur fossils, but also in the remains of many other types of plants and animals. From these other fossils we know that the climate of Tristan Otto's time was warm, humid and temperate.

Fragments of trees, shrubs and flowers were found directly next to Tristan Otto, along with fish scales and crocodile remains. These, together with the clay rich rocks in which these fossils were found make clear that Tristan Otto lived in a rapidly fluctuating fluvial landscape, with species-rich mixed forests growing on the banks.

How old is the fossil? What is Tristan Otto’s preservation status? And why are the fossilised bones black? These are the questions Franziska Sattler, palaeontologist in training, and the team at the Museum are facing in the taphonomy research area.

The scientific evaluation of information surrounding embedded fossils is known as taphonomy. Researchers use geological, chemical, physical and biochemical methods to give insights into fossilisation. The rock layer in which a specimen is found gives the approximate age. Tristan Otto originates from the Hell Creek Formation in the USA, which can be attributed to the Cretaceous period 67 to 65 million years ago.

A long time has passed between the death of an organism and the discovery of its fossilised remains. Due to many influences, what is found is never an exact image of the living animal. Soft tissue and cartilage have usually decayed entirely. Erosion and chemical processes lead to the loss of parts of the skeleton. Overlying sediments, weighing tons, physically transform the bones. Of Tristan Otto’s bones, 170 have been preserved, but some of them have been considerably deformed.

The black colour of the skeleton can be explained by the inclusion of dark pigment resulting from anaerobic decaying processes and the penetration of clay minerals. The latter have another effect: they can absorb water and expand, thus Tristan Otto’s skeleton must be protected from humidity.