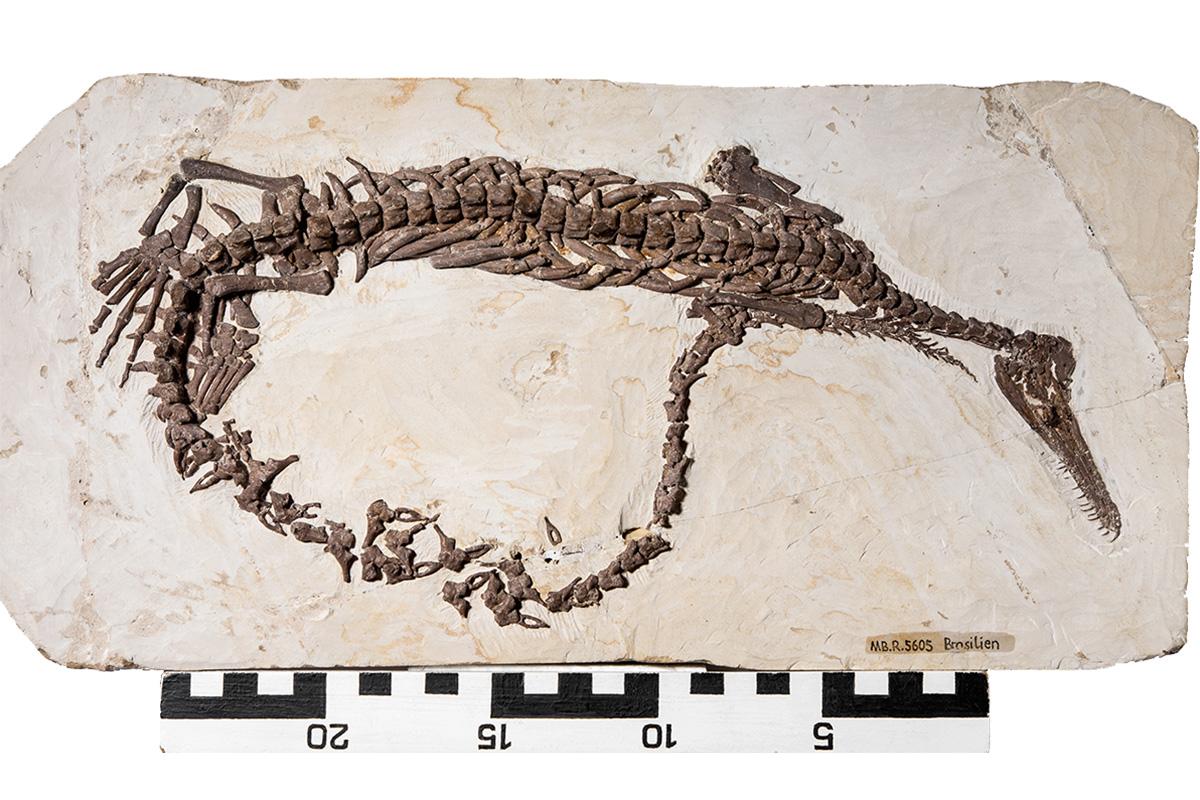 Origin of the project

This project was inspired by a series of newly published fossils of mesosaurs presenting novel interpretations of their anatomy and ecology, rekindling the debate on their temporal anatomy and questioning their phylogenetic position within early amniotes. My project intends to test these results using state-of-the-art 3D techniques and better-preserved material.

One of the main objectives of my research is to carry a detailed anatomical investigation of the three mesosaurids species (Mesosaurus tenuidens, Stereosternum tumidum and Brazilosaurus sanpauloensis) in order to reveal new phylogenetic characters.

The amniote tree of life is characterized by a bifurcation into the evolutionary lineage of mammals, Synapsida, and the reptilian evolutionary lineage, Sauropsida (the latter also including birds). Sauropsida is further divided into two major groups: Parareptilia and Eureptilia. Mesosaurids are generally considered to belong to Parareptilia, although some studies suggest that they represent basal sauropsids outside of the split between parareptiles and eureptiles. New phylogenetic characters will help testing existing hypotheses about their inter- and intrarelationships.

Through the 3D reconstruction of the general mesosaurid skull anatomy, I aim to resolve the controversial and historical question of whether their skull condition is anapsid (closed) or synapsid (one lower temporal fenestra). In addition to this, I work on a comprehensive redescription of their general anatomy, since the use of 3D unveils areas of their skeleton usually virtually impossible to observe.

Using recent methods of 3D analysis, I test whether there are differences in feeding behaviour (filter-feeders vs. active predators) and locomotion among the mesosaurid taxa.

Finally, I study the ontogeny of mesosaurs with special focus on postcranium to investigate potential variations in the growth patterns of mesosaurids, and hence see whether there might have been differences in feeding behaviour between juvenile and adult mesosaurs.

The first part of my work was to collect a substantial number of exceptionally well-preserved specimens of mesosaurs, coming from different. They have been CT-scanned to obtain high-resolution 3D models of unprecedented precision. With these reconstructions, I will be able to redescribe the skull anatomy of all 3 species mesosaurs to resolve the question of their temporal fenestration.

Based on the 3D models, I study inner cranial structures, such as the endocast, the inner ear, and other cranial organs envelops to find new elements on their sensory abilities. I also intend to perform a Finite Element Analysis, an engineering method that allows to map mechanical responses of an object to loads, so as to understand the mechanical properties of their skull, such as bite power and skull resistance. I will compare mesosaurs to other extant and fossil secondarily aquatic tetrapods. Through these methods, I wish to test the current hypotheses on mesosaurs’ ecology.

Finally, I am visiting international collections to take linear measurements and gather a database of pictures, on which I will apply geometric morphometrics as a basis for the ontogenetic study.