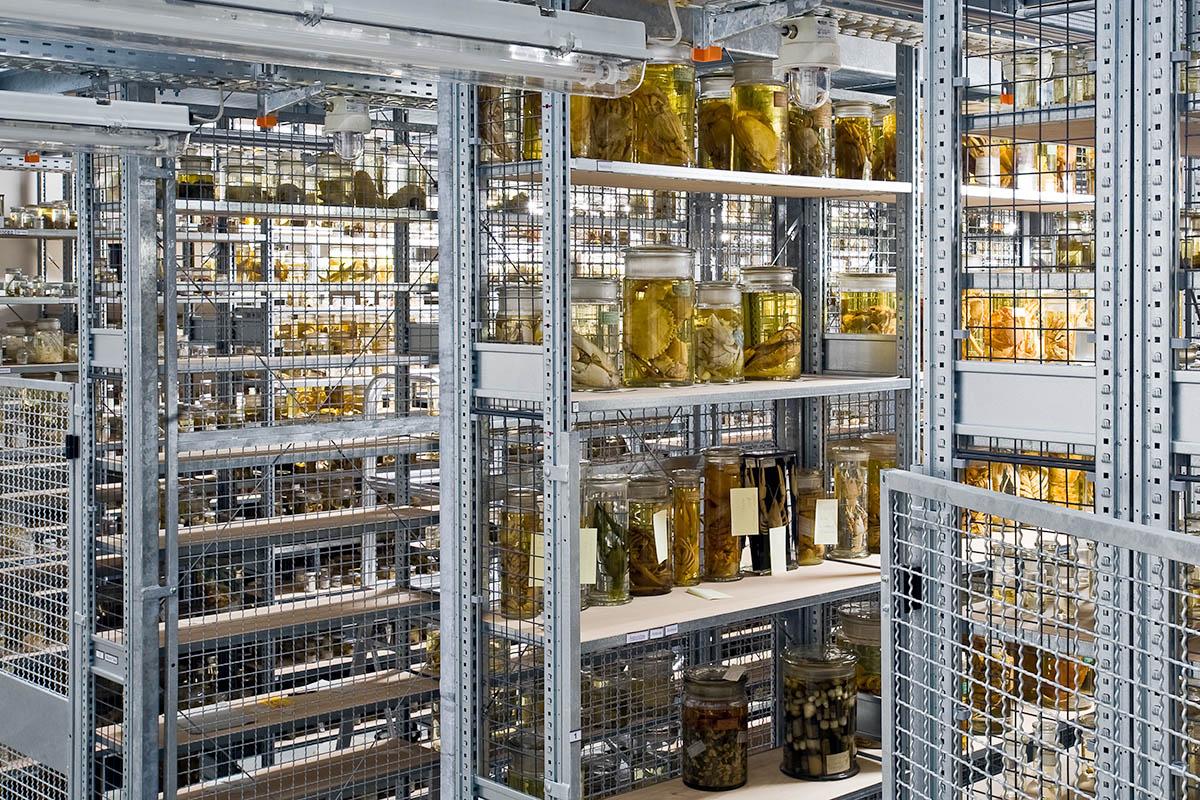 The entire Crustaceans Collection has been recorded in the SESAM database. We are now in the process of checking and harmonising geographical specifications and determining the coordinates. The collection catalogues have been scanned and can be viewed online.

The foundation of the collection are the crabs of naturalist and chaplain Johann F. W. Herbst (1743-1807) from the 18th century. Many collections by eminent experts on crustaceans have since been added.

The collection also includes collections by Franz M. Hilgendorf (1839-1904) from Japan, who founded the Deutsche Gesellschaft für Natur- und Völkerkunde Ostasiens (German Society for the Natural History and Ethnology of East Asia) in Tokyo and who, after his return in 1876 became an assistant to Director Peters at the Museum für Naturkunde Berlin in the Worms and Crustacea Department. It also contains material collected by zoologist Eduard von Martens (1831-1904), who worked as curator at the Zoological Museum Berlin until his death.

We would like to emphasize that the collection contains material from the great historic marine biological expeditions, such as the "Gazelle" expedition 1874-1876, the plankton expedition of 1889, which was the first expedition worldwide that focused on plankton, the German deep sea expedition with research ship "Valdivia" and the German South Pole expedition with the ship “Gauß” 1901-1903.

In addition, we have one of the largest collection of woodlice in the world.

This spiny lobster is a case in point that some specimens may be only of minor importance for research, but are associated with interesting anecdotes. A small brass plaque on the piece of wood on which the animal is mounted reads: Langosta capturada el 30.5.80 por Fidel junto a Erich Honecker en los cabezos de Punta Palmillas Cuba (Spiny lobster, caught by Fidel at Los Cabezos de Punta Palmillas, Cuba on 30/5/1980 in the presence of Erich Honecker). Fidel is, of course, Fidel Castro, who collected the animal with Erich Honecker on Cuba. As a matter of fact, this is the lesser of the two spiny lobsters associated with the Honeckers. The bigger and more beautiful one was caught by Margot Honecker in the presence of Fidel.

Homolochunia valdiviae was discovered in the deep sea off the East Coast of Africa during the first major German expedition to explore the deep seas in 1898 to 1899, also known as the "Valdivia expedition". The specimen was described in 1904 by the well-known zoologist Franz J.T. Doflein (1873-1924). The species name Homolochunia valdiviae pays homage to both the research ship and the leader of the expedition, Carl Chun (1852-1914).

A current research focus is on the taxonomy of amphipods, especially from Antarctica, Australia and Indonesia.

The collection is primarily used by researchers in systematics who receive the material on loan to undertake morphological and genetic research. It is currently also being used by ecologist (e.g. looking at the problem of alien species).

The library of the Crustaceans Department contains more than 19,000 books and reprints on the subject of crabs. The digital library containing works about amphipods is another focus of our work.