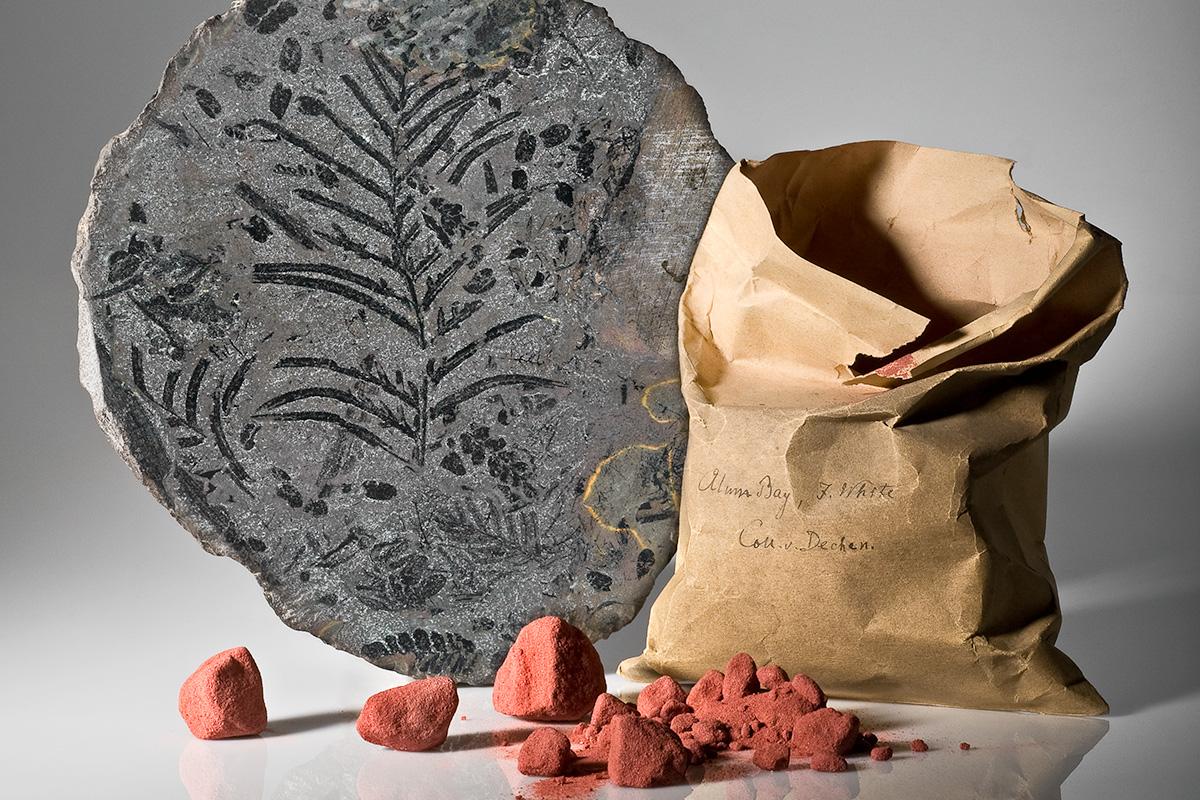 The Palaeobotany Collection comprises over 230,000 single and collective items with more than 9,100 figured specimens and types. The collection covers the entire geological history of plants. Subcollections of the Cenophytic and Mesophytic eras comprising gymnosperms and angiosperms contain approximately 67,000 single and collective items from the Lower Jurassic to the Holocene. These include over 5,800 Angiosperm and gymnosperm figured specimens and types. The sub-collections of the Palaeophytic period comprise approximately 120,000 items from the Precambrian to the Upper Perm periods. These include 3,300 figured and type specimens.

Geographical and geological foci include the Rhenish Lower Devonian, Central European Carboniferous, the Lower Permian (Rotliegend) of Thuringia and Saxony, the Cretaceous of Northern Germany and Brazil, as well as Tertiary lignite of Lusatia and Saxony-Anhalt. The material was historically often collected in connection with the commercial exploitation of coal deposits. This is why collections have been dominated by specimens from the Palaeophytic and Tertiary periods. The highly diverse material collected underground from the Carboniferous, mainly from Prussian coal deposits and the core sample collections from Saxony-Anhalt and Mecklenburg-Western Pomerania are particularly important. More recently, collections from the Mesophytic have been expanded with scientifically interesting material from the Triassic and Cretaceous period.

The collection has been arranged hierarchically according to stratigraphical, geographical, further stratigraphical and finally taxonomic criteria. This structure facilitates access to entire floras from defined time slices.

This solid foundation of collection material has been enhancing Berlin’s teaching and research efforts for centuries. A number of internationally renowned scientists worked at the Museum für Naturkunde, including Christian E. Weiss (1833-1890), Henry Potonié (1857-1913), Walther Gothan (1879-1954) and Winfried Remy (1924-1995).

Almost all voucher specimens have been recorded in our in-house Access database. Some parts of the collection have been recorded as Excel files. All inventory books, which are still kept up-to-date, have been scanned. The total number of digital entries for the Palaeophytic section is currently approximately 17,000 or 15 % of the entire collection.

The in-house database is fully functional and accessible, while external access is still very much work in progress.

The history of the collection predates the foundation of the Berliner Universität in 1810. There were fossils in the Königlich-preußische Sammlung (Royal Prussian Collection) that became later part of the scientific collections. Thus, when the Royal Prussian Mining Academy was founded in 1770, a first teaching collection was compiled and housed in a dedicated, publicly accessible building in 1801, in the Alte Münze. Parts of the collection were later transferred to the newly founded university in 1810.

Driven to a large extent by Alexander von Humboldt‘s (1769-1859) vivid interest in scientific collection, several important collections were purchased during the first decades of the 19th century. Thus, today’s collection contains historically valuable palaeobotanic material from Freiherr Ernst F. von Schlotheim (1764-1832), who, together with Graf Kaspar von Sternberg (1761-1838), is considered to be the founding father of modern palaeobotany. Thanks to Humboldt’s initiative, the collection purchased in 1846 from Forstrat Heinrich Cotta (1763-1844), founding father of modern forestry, is also part of today’s collection.

However, the bulk of the collection came together at the Preußisch Geologischen Landesanstalt (Prussian Geological Institute) until the early 1850s, thereafter the Zentrales Geologisches Institut (ZGI). From 1951/52 the collections became part of the Arbeitsstelle für Paläobotanik und Kohlenkunde at the Akademie der Wissenschaften. Until the late 1960s, the ZGI made claims for the material to be returned. When the Arbeitsstelle was dissolved in 1968/69, the collections became the property of the Geologisch-Paläontologisches Institut at the Museum für Naturkunde.

What makes this collection special is their high diversity, particularly from the Carboniferous, covering all important sites in Central Europe. The Westphalian D period is particularly well documented, including a comprehensive collection of Bulgarian material from the southern edge of Laurussia. The Rotliegend flora, especially from Thuringia, is also extremely varied and of international significance. Thus, not only the classical parts of the collection with their many vouchers and types make up the true value of the collection, but also the many sleeping beauties yet to be discovered.

This plant from the Lower Devonian in Waxweiler in the Eifel is a cladoxylale approximately 400 million years old. This find documents a surprisingly high development of plants in the Lower Devonian, a period that has so far been known for very simply organised plants. 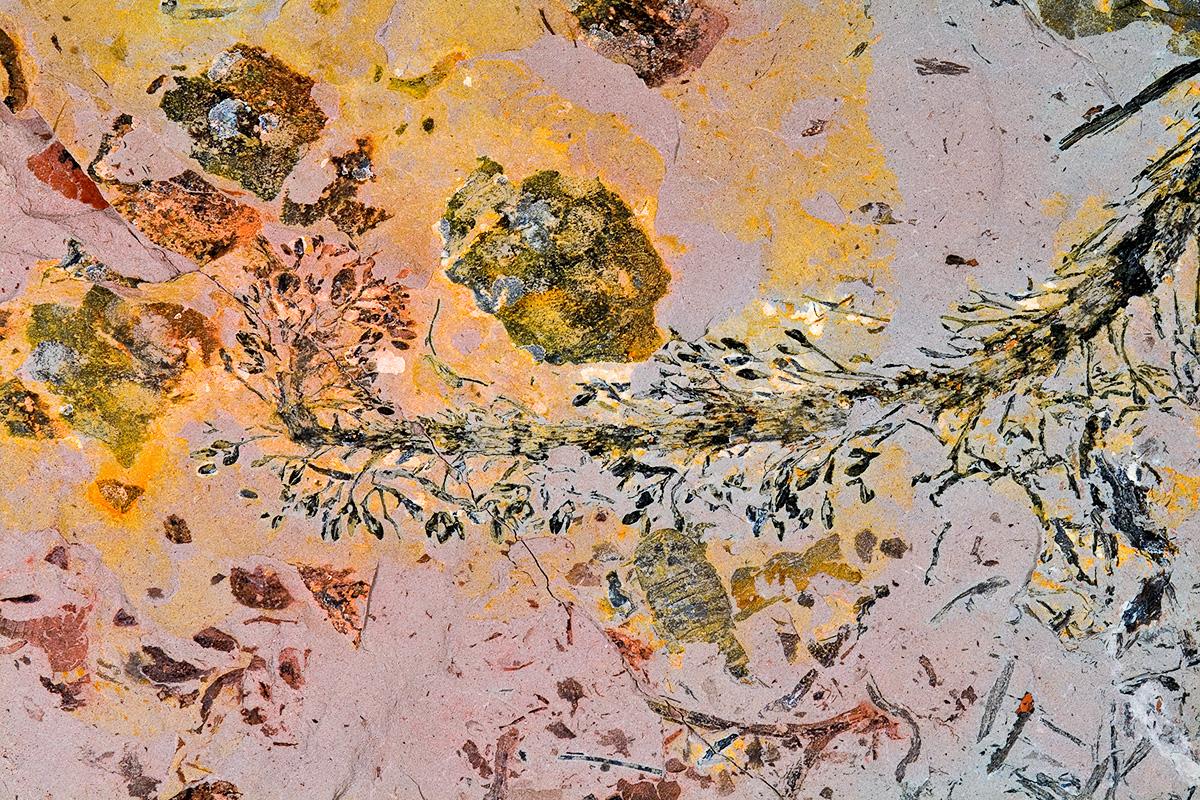 Almost complete front of Neuropteris attenuata, from Westphalian D of the Piesberg near Osnabrück, part of the Stossmeister collection. Such completely preserved fronds are extremely rare. 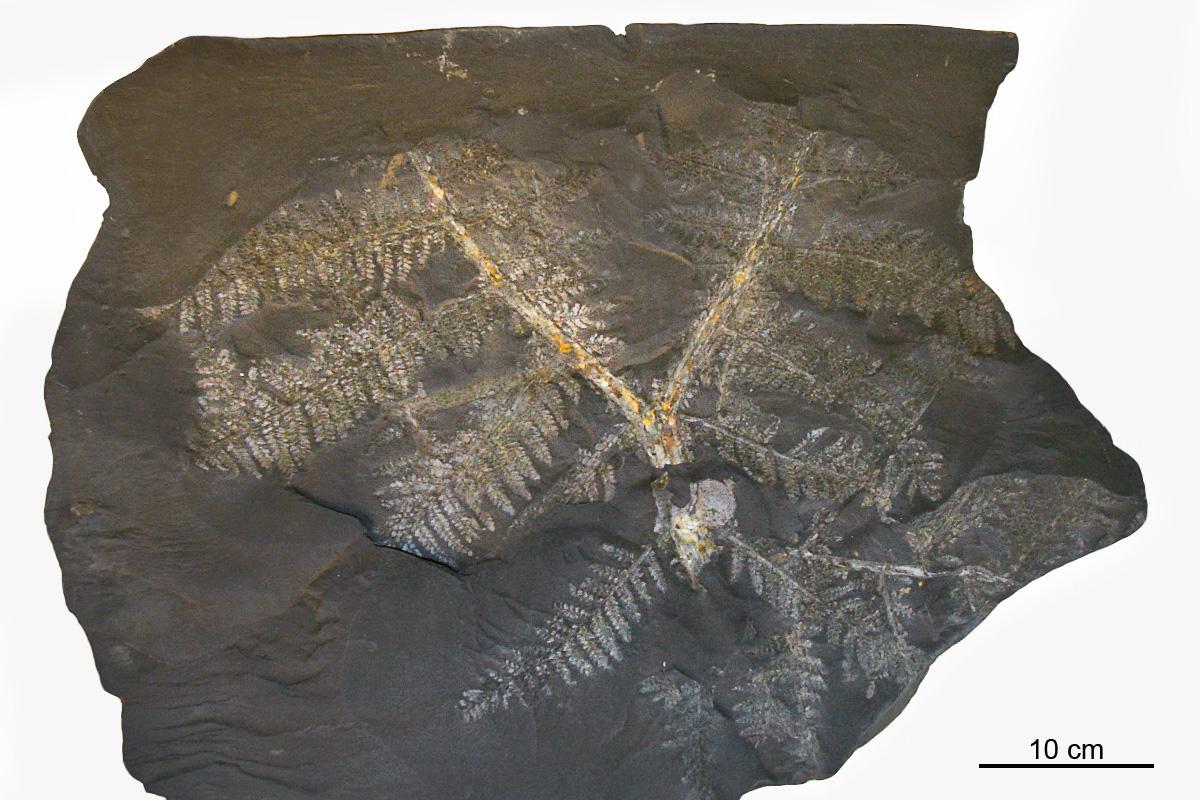 Silicified fern stem remains have been preserved from the Lower Permian, Rotliegendes, including every single cell. It is therefore possible to study their anatomy and histology in a way similar to studies on recent plants, although they are approximately 296 million years old. 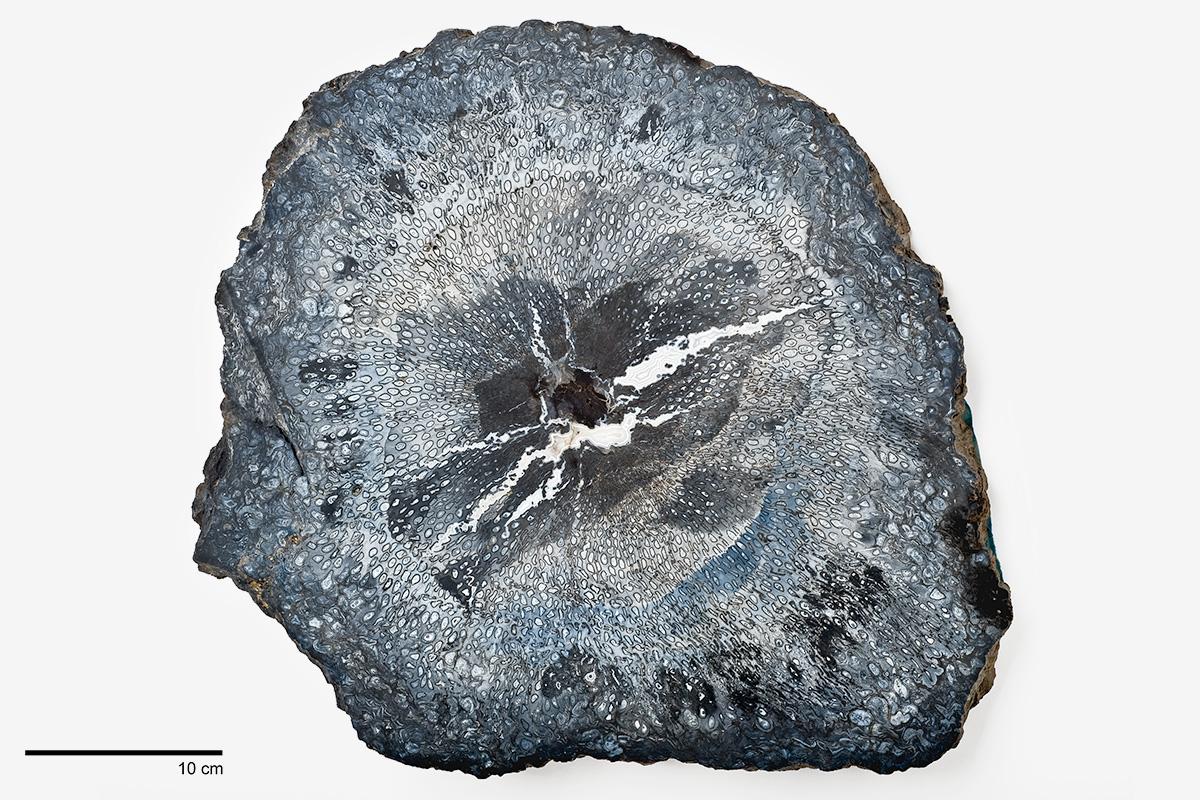 The collection has remained an important basis for palaeobotanic research. We are currently studying the Carboniferous in Central Germany between Leipzig and Wittenberg. The study material comes from core samples taken in the 1970s and 1980s. Many plants found in the lower strata in Saxony-Anhalt are being incorporated into the collection. In addition, early land plants from the Eifel region are being studied, focusing on conditions at the time of sedimentation and the differences in the profiles of vegetation horizons.

We are currently rearranging large portions of the Carboniferous and Devonian collections. These parts of the collection have been moved from the main building to external storage. This, however, does not affect their accessibility.

A reprint collection comprising approximately 10,000 items is attached to the Palaeobotany Collections. It developed from the former library of the Palaeobotany Curatorship and reprint collections from curators working at the Museum für Naturkunde after the Second World War. Stocks are currently inventorised in a simple database to facilitate access. Reprints can only be viewed on location. Loans are not permitted.