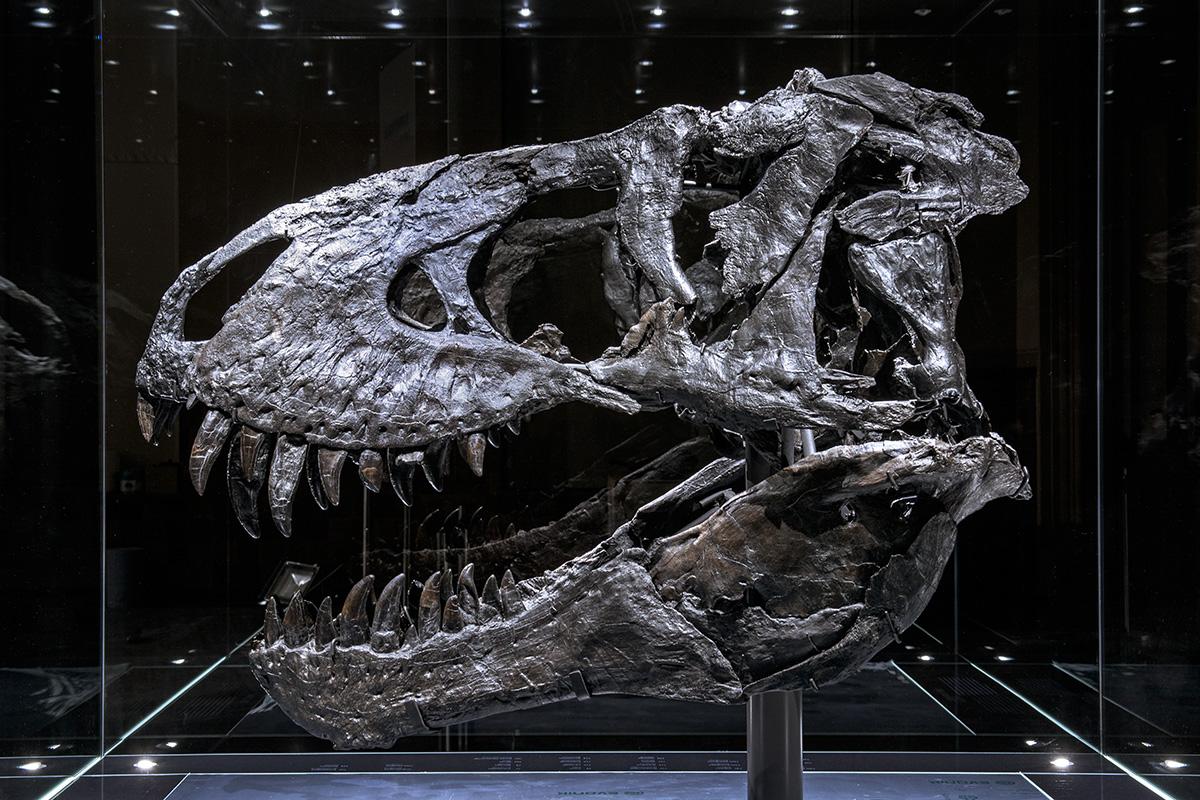 Tristan Otto is the only original skeleton of a T. rex in Europe to date. The twelve- metre-long and four-metre-high deep black skeleton of the predatory dinosaur from the Upper Cretaceous period was found in 2010 in the Hell Creek Formation in Montana, USA. It is among the best-preserved Tyrannosaurus rex specimens worldwide.

Tristan Otto bears the names of the owners‘ sons. The precious fossil is available to the Museum für Naturkunde for research and exhibition for the coming years. The skeleton remains private property, but is given an inventory number by the Museum. As MB.R.91216 this Tyrannosaurus find is identifiable in scientific terms and its data can be accessed.

“The Museum für Naturkunde Berlin is one of the world’s leading museums with outstanding exhibitions and research, particularly regarding dinosaurs. Therefore it seemed to me to be the perfect place for Tristan Otto.”

Niels Nielsen is a successful businessman and collector. Alongside art and manuscripts, his interests include dinosaurs. In November 2014, he was offered a particularly complete Tyrannosaurus rex skeleton. When visiting a preparation workshop in Pennsylvania, he fell in love with the deep black bones. Together with his friend, Jens Peter Jensen, he bought the fossil that was named Tristan Otto after the two owners’ sons.

Right from the beginning, Niels Nielsen was determined to give scientific research and the public access to the skeleton. He chose the Museum für Naturkunde in Berlin, to which Tristan Otto will be lent free of charge for the coming years.

The Tristan Otto agreement shows a way out of a dilemma much criticized by scientists – the purchase of fossils and artefacts by private individuals. With the purchase, many precious specimens become unavailable to research. Museums, on the other hand, do not have the means to cover the cost for salvaging and preparing such a find. Tristan Otto is an example of a solution to the problem. At the same time, all presentations and information that have been collected about the animal add to its value – in every sense of the word. A situation from which all benefit.

Craig Pfister is a professional fossil excavator and palaeontologist. With the permission of land owners, he mainly excavates dinosaurs in Montana. His finds are legal and can be sold. He has found several Tyrannosaurus specimens.

Due to the long cold winters, excavation can only take place from the end of March to late October. Craig Pfister spends this time on site, sleeping in tents and either excavating or going for long treks in search of promising sites. On one of his treks in 2010, he discovered part of a pelvic bone protruding from the ground. Craig immediately realised that this was a Tyrannosaurus rex.

However, soon after his discovery, he fractured his ankle, and in the following season 2011, he was hampered by a shoulder injury. Thus, it took until October 2012 until the skeleton was recovered.

Tristan Otto’s bones were found in the Hell Creek Formation, which runs through Montana, North and South Dakota in the USA. The well-known formation contains deposits beginning at 67 million years ago and ending approximately 65 million years before our time. It is rich in dinosaurs as well as remains of other animals and plants. These finds tell us that at the lifetime of Tristan Otto, the climate was humid, warm and temperate.

A long time has passed between the death of an organism and the discovery of its fossilised remains. Due to many influences, what is found is never an exact image of the living animal. Soft tissue and cartilage have usually decayed entirely. Erosion and chemical processes lead to the loss of parts of the skeleton. For Tristan Otto, some 170 bones have been found, let alone 50 skull bones, which is an absolute rarity.