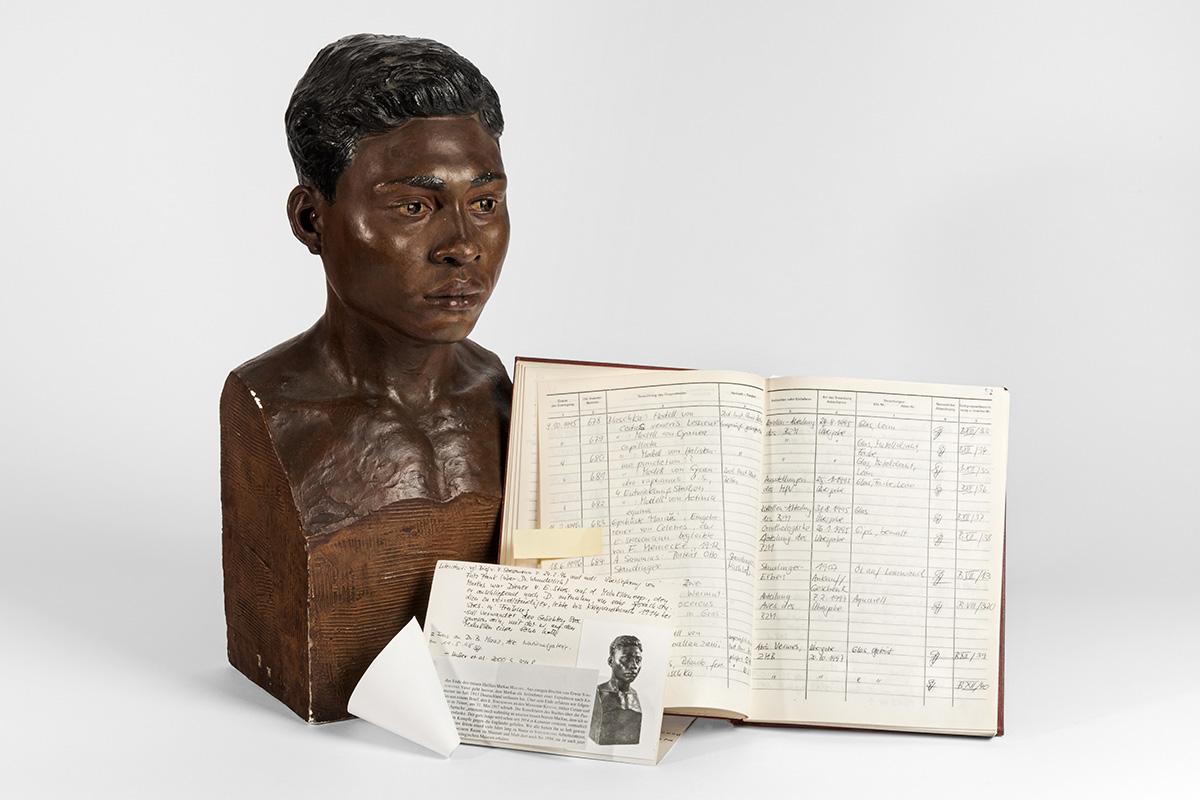 The busts in the collections of the Museum für Naturkunde in Berlin usually portray scholars of the natural sciences such as Alexander von Humboldt (1769–1859) or Martin Hinrich Lichtenstein (1780–1857). A bust of a particular kind can be found in the holdings of the Historical Division. It was transferred there from the Ornithological Department on February 16, 1996 and is documented in an inventory book of the Historical Image and Document Collections.

The plaster bust shows a young man with wavy hair, looking straight ahead on a simple pedestal. On the underside is an inscription "FMEINECKE, 1912". At first glance, this seems to be a classic representation of a scholar. Contrary to what its form suggests, however, the bust does not depict a person generally known to the public. A further aspect distinguishes it from the other objects in the collection: its coloration.

The bust was originally part of the bequest of Erwin Stresemann (1889–1972), curator of the ornithological collection at the Museum für Naturkunde in Berlin. The piece was initially displayed in his private household and later stood in Stresemann’s museum office. When asked by a student who the young man was, he is said to have answered: "This is my friend, Markus Mailopu from Seram".

Markus Mailopu (?–1914) was a young man whom Stresemann met on the second Freiburg Moluccan expedition (1910–1912): a Malaysian native who provided local knowledge, quickly advanced to expedition assistant, and subsequently accompanied Stresemann to Germany as translator and personal assistant. This is how Stresemann recollects their relationship in the unpublished foreword to his 1918 publication Die Paulohisprache.

Throughout the nineteenth and early twentieth centuries it was common practice to engage local communities in the collection and field work of European expeditionary projects. Rarely have the names of local informants, carriers, hunters, or taxidermists been recorded in the surviving materials from these expeditions. Rather, colonial power relations led to the negation of the influence of indigenous knowledge and the work of the local population. The bust of Mailopu is remarkable in two senses: not only is the depicted person identifiable because he is mentioned by name in several sources. The existence of his bust is also unusual in the context of the natural sciences’ memorial culture, which was focused primarily on European public figures at the beginning of the twentieth century.

The bust was made in 1912 by Friedrich Meinecke (1873–1913), an artist trained at the Großherzoglich-Badische Akademie der bildenden Künste (Academy of Fine Arts) in Karlsruhe. Meinecke was best known for his ethnographic sculptures, which he sold to the Freiburg Museum für Natur und Völkerkunde (Museum of Nature and Ethnology, today Museum Natur und Mensch), among others. His works were created from photographs, casts, or living models. We can only speculate whether Mailopu posed for Meinecke: A portrait photograph of the young man from 1913 indicates Freiburg im Breisgau, Meinecke's place of work, as the site where the image originated. Thus, it seems that both men were in Freiburg around the time the bust was created.

The production context of the bust is only one of the questions that remain open for the time being. Its purpose, background, and significance in Meinecke's work require further investigation. Is it an object of memorial culture or an ethnographic study? Who was Markus Mailopu beyond what the documents we know of can tell us: Which alternative sources might still be found, where do blank spaces in our records emerge and why? These questions, which go beyond the archival indexation of authorship, dating, provenance, and materiality, require a deeper analysis from a postcolonial perspective.

This object biography is part of the project Images of Nature.

Sandra Miehlbradt is an archivist at the Museum für Naturkunde’s Historical Division. She is currently preparing her doctoral thesis on the work of Hermann Burmeister (1807–1892) in Argentina. She encountered the bust of Markus Mailopu in her office, where it had long been on display before being transferred to the depot in 2020.