From Chain to Circle 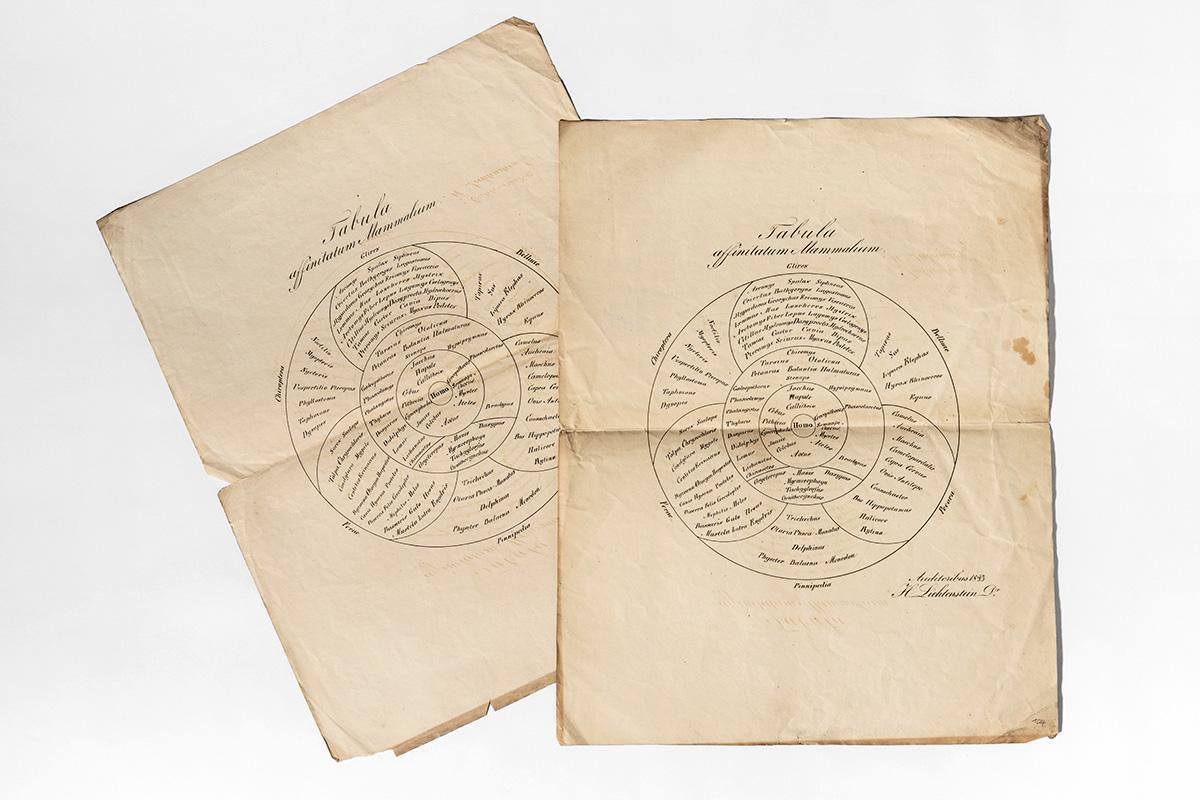 Humankind, Homo, stands at the centre. It forms the anchor point of the Tabula affinitatum Mammalium, a circular chart of mammals designed by zoology professor Martin Hinrich Lichtenstein (1780–1857) for his lecture at the Berlin University in the winter semester of 1834. Encircling the humans at the heart of the concentric rings are various primates. The primates, in turn, are surrounded by marsupials, who themselves are joined by aardvarks and armadillos. Rodents, hooved creatures, aquatic mammals, carnivorans and bats gather along the outer orbit of chart. Gracefully curved arcs flow between the different mammals, creating borders, but also bridges: the flying squirrels and gliders, for instance, hover close to the flying foxes, while the nocturnal dormice doze alongside the nocturnal aye-ayes. Shared characteristics and not just taxonomic affiliation determine the arrangement of genera across the diagram.

The printed image described here is located amidst the administrative papers of Lichtenstein, who was not only one of the first professors at the Berlin University, established in 1810[AM1] , but also an early director of the Zoological Museum. Two versions of this print are now preserved in the Historical Division of the Berlin Museum für Naturkunde. In an archival folder otherwise filled with invoices, receipts, reports, instructions, and inventory lists, the pages stand out as the only images and as rare evidence of Lichtenstein's teaching activities.

The chart is at once an expression of utter bewilderment towards nature’s overwhelming diversity and an optimistic attempt to establish its clear order. Already since the middle of the eighteenth century, the traditional image of nature as a linear chain – the scala naturae – was breaking apart. Nature had become too multifaceted: Around 1740, the taxonomist Carl von Linné (1741–1783) had already counted around 600 animal species; a hundred years later, naturalists estimated that mammal species alone numbered in the 2,000s and that insects comprised as many as 44,000 species. To capture the complex connections between the growing number of animal groups, eighteenth-century researchers increasingly turned to images of webs and nets. Yet these visualisation efforts often resulted in an unmanageable, barely legible tangle of knotted threads.

As director of a rapidly expanding zoological museum, Lichtenstein, too, felt the pressure of a scarcely controllable, 'chaotic' nature. With his elegant, nearly symmetrical circle, which seemingly rendered unto humans the power to organize the world around them, Lichtenstein tried to tame nature’s bounty. He only briefly succeeded. A few years after creating this image – animal names and specimens had only continued to increase in the meantime – Lichtenstein wrote defeated: "[...] the new age is becoming too much to handle [...] such that one feels that one can no longer get ahead and is too stupid and ignorant for the new drivelling systematics and nomenclature – at least too weak to swim against the current."

This object biography is part of the project Images of Nature.

Anne MacKinney is a historian of science and researches the history of collections, media of collection management, as well as the interfaces between museums, state administration, and business. She is currently working on her first book Nature's Registry, which examines the role of documentary practices in Prussia's natural history collection landscape and scientific infrastructure between 1770 and 1850.