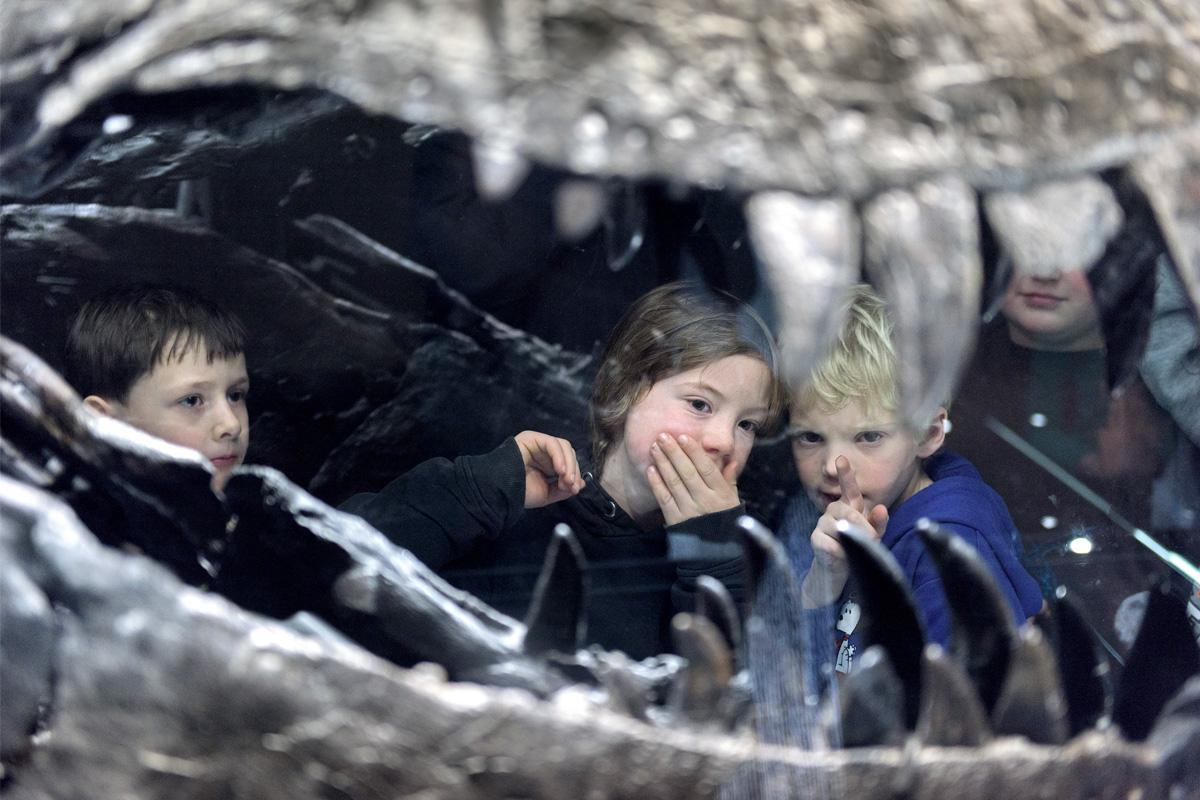 The museum offers guided tours with various themes for children from age 5 onwards and for teenagers. The tours can be booked during opening hours – some selected tours are also available after hours. Please note the information on booking conditions. Unless otherwise stated, prices do not include admission.

Highlights of the Exhibition

This overview tour focuses on the museum’s key attractions: the 13-metre-high Giraffatitan skeleton, the primeval bird Archaeopteryx, Knut the Polar Bear and the amazing biodiversity wall. A further highlight of this guided tour is a visit to the East Wing, showing the museum’s scientific wet collections.

150 million years ago, there were land-dwelling dinosaurs, ichthyosaurs hunted their prey in the sea and pterosaurs ruled the skies. This guided tour explains what the world of dinosaurs looked like many million years ago and what other animals and plants populated the Earth during that period.

Looking at examples including the primeval bird Archaeopteryx, lobe-finned fish, lung fish and the primeval horse Eurohippus, evolutionary processes and mechanisms such as selection, adaptation, convergence and homology are explained and discussed.

Conservation of species and biodiversity

More plants and animals have become extinct in recent years than ever before since the end of the dinosaur era. This guided tour is focusing on what needs to be done to save endangered species such as giant pandas, tigers, rhinos and polar bears from the Tasmanian Tiger’s fate – a species now extinct since 1936. This includes also a debate on the possible contributions of each individual to the conservation of biodiversity.

Taxidermy at the Museum

The process of mounting animals can be followed step by step in the exhibition. Providing various examples, the guided tour shows how a taxidermy piece is prepared, details special techniques used while also presenting famous museum animals like Bobby the Gorilla and Knut the Polar Bear.

Today’s diversity of species, but also the mass extinction of entire groups of animals, has been influenced by a number of factors. Populations were separated by the formation of mountain ranges or by continents drifting apart. Meteorite impacts are thought to be responsible for mass extinction events, while volcano eruptions also created new habitats for plants and animals. This guided tour explores the complex biological and geological interdependencies that influence the earth.

The minerals gallery houses more than a thousand different types of minerals, including some precious pieces Alexander von Humboldt collected in Russia, as well as the rock in which Klapproth proved the existence of uranium for the first time. This guided tour explains the use of minerals in our daily lives, what their components are and how they are used in industry, engineering and technology.

Outside the museum
Berlin is the greenest and species-richest capital in Europe. The urban ecology tour will introduce visitors to many such city-dwellers near the Museum and look at their adaptation to urban life. One particular focus of the tour will be the signs of climate change that are already visible and how they affect plants, animals and humans in Berlin.

Guided tour after hours
Groups of 10 or more people can book on this exclusive out-of-hours tour of the museum. The special atmosphere of a natural history museum at night makes this tour a truly extraordinary experience. In addition to guided tours of the museum highlights, you can also book tours of special exhibitions or on specific topics of your choice.

The following programmes will soon be possible again:

Touch Tour Adventures for the Blind and Visually Impaired

We offer a variety of custom-made programmes for school classes and other groups with blind and visually impaired participants.

During the guided tour, children from age 6 learn how fossils were formed and what they can tell us about earlier forms of life. Ammonites, ichthyosaurs and real dinosaur bones can be explored by touch and the children can make a plaster cast of a fossil to take home. Group bookings only.

This touch tour gives participants the opportunity to get to know the Museum’s exhibitions at leisure and explore specimens such as fossils, minerals and mammal skulls by touch. Group bookings only.

For booking and further information regarding prices or advice on booking contact us per phone or email.

Tips for group visits to the museum